Map of Homeric Greece, Ithaca can be seen to the west 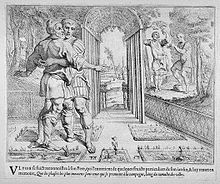 Ithaca (/ˈɪθəkə/; Greek: Ιθάκη, Ithakē) was, in Greek mythology, the island home of the hero Odysseus. The specific location of the island, as it was described in Homer's Odyssey, is a matter for debate. There have been various theories about its location. Modern Ithaca has often been accepted to be Homer's island. A more recent candidate is Paliki, which may have been an island separated from the rest of Kefalonia, as argued by Bittlestone, Diggle and Underhill in Odysseus Unbound.[1][2][3]

The central characters of the epic such as Odysseus, Achilles, Agamemnon and Hector are generally believed to be fictional characters.[citation needed] Yet there are many claims that some Homeric hero long ago had inhabited a particular contemporary region or village. This, and the extremely detailed geographic descriptions in the epic itself, have invited investigation of the possibility that Homer's heroes might have existed and that the location of the sites described therein might be found.

Heinrich Schliemann believed he tracked down several of the more famous traditions surrounding these heroes. Many locations around the Mediterranean were claimed to have been the heroes' "homes", such as the ruins at Mycenae and the little hill near the western Turkish town of Hissarlik. Schliemann's work and excavations proposed, to a very sceptical world, that Homer's Agamemnon had lived at Mycenae, and that "Troy" itself indeed had existed at Hisarlik. Much work has been done to identify other Homeric sites such as the palace of Nestor at Pylos. These attempts have been the subject of much scholarly research, archaeological work, and controversy.

Theories on the location of "Homer's 'Ithaca'" were formulated as early as the 2nd century BC to as recently as AD 2005. Each approach to identifying a location has been different, varying in degrees of scientific procedure, empirical investigation, informed hypothesis, wishful thinking, fervent belief, and sheer fantasy. Each investigator and each investigation merits interest, as an indicator both of the temper of the times in which a particular theory was developed, and of the perennial interest in Odysseus and the possible facts of his life. Some of the latest "Homer's 'Ithaca'" approaches resemble some of the earliest.

Theorists, and excavations elsewhere, on the location of "Homer's 'Ithaca'"