From Wikipedia, the free encyclopedia
Jump to navigation Jump to search
Mountain at which the Ten Commandments were given to Moses according to the Hebrew Bible
For other uses of Horeb or Mount Horeb, see Horeb (disambiguation). For the biblical Mount Sinai, see Biblical Mount Sinai. 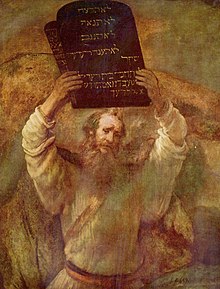 Moses with tablets of the Ten Commandments, painting by Rembrandt, (1659)

Mount Horeb, Hebrew: חֹרֵב, Greek in the Septuagint: Χωρήβ, Latin in the Vulgate: Horeb, is the mountain at which the Book of Deuteronomy in the Hebrew Bible states that the Ten Commandments were given to Moses by Yahweh. It is described in two places (Book of Exodus Exodus 3:1, Books of Kings 1 Kings 19:8) as הַר הָאֱלֹהִים the "Mountain of God". The mountain is also called the Mountain of YHWH.[1]

In other biblical passages, these events are described as having transpired at Mount Sinai. Although most scholars consider Sinai and Horeb to have been different names for the same place,[2][3][4] there is a minority body of opinion that they may have been different locations.[1]

The Protestant reformer John Calvin took the view that Sinai and Horeb were the same mountain, with the eastern side of the mountain being called Sinai and the western side being called Horeb.[5] Abraham Ibn Ezra suggested that there was one mountain, "only it had two tops, which bore these different names".[6]

Horeb is thought to mean glowing/heat, which seems to be a reference to the sun, while Sinai may have derived from the name of Sin, the Sumerian deity of the moon,[1][7] and thus Sinai and Horeb would be the mountains of the moon and sun, respectively.[1] 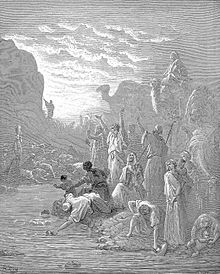 The name Horeb first occurs at Exodus 3:1, with the story of Moses and the burning bush. According to Exodus 3:5, the ground of the mountain was considered holy, and Moses was commanded by God to remove his sandals.

Exodus 17:6 describes the incident when the Israelites were in the wilderness without water. When Moses was "upon the rock at Horeb", he strikes the rock and obtains drinking water from the rock. Exodus 17:7 goes on to say that Moses "called the name of the place Massah and Meribah, because of the contention of the children of Israel, and because they tempted the Lord, saying, 'Is the Lord among us or not?'”

In Deuteronomy, Horeb is mentioned several times in the account of the wanderings of the Israelites in the wilderness: Deuteronomy 1:2, 1:6, and 1:19. Moses recalled in Deuteronomy 1:6 that God had said to the Israelites at Horeb, "You have dwelt long enough at this mountain: turn and take your journey", confirming that Horeb was the location from which they set off towards Canaan.

The account of the delivery to Moses of the Ten Commandments, and references back to it, include mentions of Horeb at Deuteronomy 4:10, 4:15, 5:2,9:8, 18:16 and 28:69. There are similar references at Psalms 106:19 and Malachi 4:4. Deuteronomy 5:2 creates the sense that the current generation to whom Moses was speaking had been present at Mount Horeb when Moses descended with the commandments, although "the individuals who [had been] present had all perished with the exception of Moses, Joshua, and Caleb. [The] nation survived, and as it was with the nation as an organic whole that the covenant had been made. It might be with propriety said that it was made with those whom Moses addressed at this time, inasmuch as they constituted the nation."[8]

1 Kings 8:9 and 2 Chronicles 5:10 state that the Ark of the Covenant contained only the tablets delivered to Moses at Horeb. In 1 Kings 19:8, Elijah visits "Horeb the mount of God".

According to the documentary hypothesis, the name Sinai is used in the Torah only by the Jahwist and Priestly Source, whereas Horeb is used only by the Elohist and Deuteronomist.[7][9]

There are no references to Horeb in the New Testament. In Galatians 4:24–25, Mount Sinai is mentioned: "… One covenant is from Mount Sinai and bears children who are to be slaves: This is Hagar. Now Hagar stands for Mount Sinai in Arabia and corresponds to the present city of Jerusalem, because she is in slavery with her children." Mount Sinai/Horeb is alluded to in Hebrews 12:18-21.[10]

The location of Horeb is disputed. Jewish and Christian scholars have advanced varying opinions as to its whereabouts since biblical times.[1] Elijah is described in 1 Kings 19:1-21 as traveling to Horeb, in a way which implies that its position was familiar when that was written, but there are no biblical references set any later in time. Additionally the passage identifies a cave large enough to lodge in.