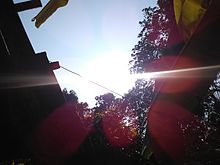 The Sun at noon, as viewed from Kerala, India

Solar noon is the time when the Sun appears to contact the local celestial meridian. This is when the Sun apparently reaches its highest point in the sky, at 12 noon apparent solar time and can be observed using a sundial. The local or clock time of solar noon depends on the longitude and date.[1] 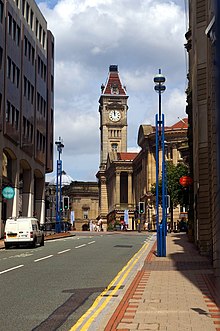 The word noon is derived from Latin nona hora, the ninth hour of the day, and is related to the liturgical term none. The Roman and Western European medieval monastic day began at 6:00 a.m. (06:00) at the equinox by modern timekeeping, so the ninth hour started at what is now 3:00 p.m. (15:00) at the equinox. In English, the meaning of the word shifted to midday and the time gradually moved back to 12:00 local time (that is, not taking into account the modern invention of time zones). The change began in the 12th century and was fixed by the 14th century.[2]

Solar noon (informally high noon and formally local apparent solar noon)[3] is the moment when the Sun contacts the observer's meridian, reaching its highest position above the horizon on that day ("Sun transit time") and leaving the shortest shadow. This is also the origin of the terms ante meridiem (a.m.) and post meridiem (p.m.), as noted below. The Sun is directly overhead at solar noon at the Equator on the equinoxes, at the Tropic of Cancer (latitude 23°26′11.9″ N) on the June solstice and at the Tropic of Capricorn (23°26′11.9″ S) on the December solstice. In the Northern Hemisphere, north of the Tropic of Cancer, the Sun is due south of the observer at solar noon; in the Southern Hemisphere, south of the Tropic of Capricorn, it is due north.

The elapsed time from the local solar noon of one day to the next is exactly 24 hours on only four instances in any given year[citation needed]. This occurs when the effects of Earth’s obliquity of ecliptic and its orbital speed around the Sun offset each other. These four days for the current epoch are centered on 11 February, 13 May, 25 July, and 3 November.

It occurs at only one particular line of longitude each event. This line varies year to year, since Earth's true year is not an integer number of days. This event time and location also varies due to Earth's orbit being gravitationally perturbed by the planets.

For the same reasons, solar noon and "clock noon" are usually not the same. The equation of time shows that the reading of a clock at solar noon will be higher or lower than 12:00 by as much as 16 minutes.

In the US, noon is commonly indicated by 12 p.m., and midnight by 12 a.m. While some argue that such usage is "improper"[4] based on the Latin meaning (a.m. stands for ante meridiem and p.m. for post meridiem, meaning "before midday" and "after midday" respectively), digital clocks are unable to display anything else, and an arbitrary decision must be made.

An earlier standard of indicating noon as "12M" or "12m" (for "meridies"), which was specified in the U.S. GPO Government Style Manual,[5] has fallen into relative obscurity; the current edition of the GPO makes no mention of it.[6][7][nb 1]

However, due to the lack of an international standard, the use of 12 a.m. and 12 p.m. can be confusing. Common alternative methods of representing these times are: