The Democratic National Committee (DNC) is a corporation acting as the governing body for the United States Democratic Party. The committee coordinates strategy to support Democratic Party candidates throughout the country for local, state, and national office. It organizes the Democratic National Convention held every four years to nominate and confirm a candidate for President of the United States, and to formulate the party platform. While it provides support for party candidates, it does not have direct authority over elected officials.[3]

Its chair is elected by the committee. It conducts fundraising to support its activities.[3]

The DNC was established at the 1848 Democratic National Convention.[1] The DNC's main counterpart is the Republican National Committee.

The DNC is responsible for articulating and promoting the Democratic platform and coordinating party organizational activity. When the president is a Democrat, the party generally works closely with the president. In presidential elections, it supervises the national convention and, both independently and in coordination with the presidential candidate, raises funds, commissions polls, and coordinates campaign strategy. Following the selection of a party nominee, the public funding laws permit the national party to coordinate certain expenditures with the nominee, but additional funds are spent on general, party-building activities.[4] There are state committees in every state, as well as local committees in most cities, wards, and towns (and, in most states, counties). 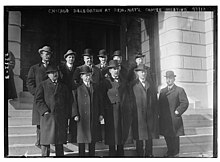 The DNC establishes rules for the caucuses and primaries which choose delegates to the Democratic National Convention, but the caucuses and primaries themselves are most often run not by the DNC but instead by each individual state. Primary elections, in particular, are invariably conducted by state governments according to their own laws. Political parties may choose to participate or not participate in a state's primary election, but no political party executives have any jurisdiction over the dates of primary elections, or how they are conducted.[citation needed]

Outside of the process of nominating a presidential candidate, the DNC's role in actually selecting candidates to run on the party ticket is minimal.[citation needed]

All DNC members are superdelegates to the Democratic National Convention, whose role can take precedence over a close primary race. However, the methodology for this has been called into dispute in both the 2016 and 2020 primary races and concerns the question of candidates achieving a voter majority vs plurality. By virtue of remaining on the ballot, candidates may then likely impede party voters to realize a majority for any single candidate. This is how superdelegates currently function. These delegates, officially described as "unpledged party leader and elected official delegates," fall into three categories based on other positions they hold:[6]

In the 2002 election cycle, the DNC and its affiliated committees (which include numerous local committees and committees formed to coordinate expenditures for specific districts or races) raised a total of US$162,062,084, 42% of which was hard money. The largest contributor, with US$7,297,937 was the Saban Capital Group, founded in 2001 by Haim Saban. Fred Eychaner, the owner of Newsweb Corporation, gave the second highest amount of money to the DNC and its affiliates, US$5,175,000. The third largest contributor was Steve Bing of Shangri-La Entertainment, who gave US$4,758,000.[7]

The DNC introduced a small-donor fund raising campaign, the Democracy Bonds program, set up by Howard Dean in the summer of 2005.[9] There were only 31,000 Democracy Bond donors by May 2006, off-pace from the goal of 1 million donors by 2008. The program no is longer in place.

In June 2008, after Senator Barack Obama became the presumptive Democratic presidential nominee, Dean announced that the DNC, emulating the Obama campaign, would no longer accept donations from federal lobbyists.[11] In July 2015, during the 2016 election cycle, the DNC, led by Debbie Wasserman Schultz, reversed this policy.[12]

In addition, a National Advisory Board exists for purposes of fundraising and advising the executive. The present chair is Elizabeth Frawley Bagley, former U.S. Ambassador to Portugal.

The Deputy Chair of the Democratic National Committee was re-established by Tom Perez in February 2017 after the 2017 DNC Chair race, won by Perez.

After a close victory over Minnesota Congressman Keith Ellison, Perez appointed Ellison as Deputy Chair in an attempt to lessen the divide in the Democratic Party after the contentious 2016 Democratic presidential primaries, which saw conflicts between supporters of Hillary Clinton and Bernie Sanders.[21] Perez was seen as being more in line with the Clinton wing, while Ellison was more in line with the Sanders wing.[22] The role's revival in 2017 has been described by critics as largely titular and ceremonial.[23]

On November 8, 2018, Ellison resigned from the position due to his win in the Minnesota Attorney General election.[24] The position remains unoccupied.

In June 2019, DNC Chair Tom Perez responded to calls for the DNC to hold a presidential candidate debate devoted to climate change policy. In a statement published to his Medium page, he confirmed that there would be no such climate debate in the 2020 primary season as the debate guidelines had already been set and could not be adjusted mid-race without sacrificing fairness to the candidates.[27] Nevertheless, in January 2020 the DNC would go on to make immense adjustments to its debate guidelines by easing the grassroots donor requirement necessary to appear on the Nevada debate stage. Several candidates and their campaigns expressed concern that the new guidelines displayed overt favoritism by the DNC, as the changes were enacted to the sole benefit of Michael Bloomberg’s upstart candidacy and had not been adopted earlier in the race when other candidates such as Cory Booker had requested similar measures. Bloomberg had consistently failed to qualify for the debate stage under the previous guidelines.[28] In another departure from Perez’s June statement, as of August 2019, the DNC is no longer attempting to limit the candidates' participation in events such as a CNN town hall or an MSNBC forum on the topic.[29]

In the 1970s, the DNC had its head office in the Watergate complex, which were burglarized by entities working for Richard Nixon's administration during the Watergate scandal.

The Chinagate was an alleged effort by the People's Republic of China to influence domestic American politics prior to and during the Clinton administration and also involved the fund-raising practices of the administration itself.[30][31]

In 2002, the Federal Election Commission fined the Democratic National Committee $115,000 for its part in fundraising violations in 1996.[32]

Cyber attacks and hacks were claimed by or attributed to various individual and groups such as:

On July 22, 2016, WikiLeaks released approximately 20,000 DNC emails.[42] Critics claimed that the Committee unequally favored Hillary Clinton and acted in support of her nomination while opposing the candidacy of her primary challenger Bernie Sanders. Donna Brazile corroborated these allegations in an excerpt of her book published by Politico in November 2017, and also claimed that the Clinton campaign bought control of the DNC.[43] The leaked emails spanned sixteen months, terminating in May 2016.[44] The hack was claimed by Guccifer 2.0, but several cybersecurity firms believe this assertion is false, instead alleging that the hacks were perpetrated by Russia, as mentioned above.[45]

The WikiLeaks releases led to the resignations of Chairperson Debbie Wasserman Schultz, Communications Director Luis Miranda, Chief Financial Officer Brad Marshall and Chief Executive Amy Dacey.[46] After she resigned, Wasserman-Schultz put out a statement about possible FBI assistance in investigating the hacking and leaks, claiming "the DNC was never contacted by the FBI or any other agency concerned about these intrusions."[47] During a Senate hearing in January 2017, James Comey testified that the FBI requested access to the DNC's servers, but were denied. He also testified that old versions of the Republican National Committee's servers were breached, but then-current databases were unaffected.[48]

The DNC subsequently filed a lawsuit in federal court against WikiLeaks and others alleging a conspiracy to influence the election.[49]