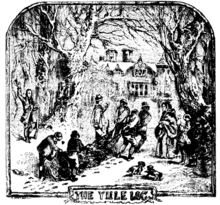 The Yule log, Yule clog, or Christmas block is a specially selected log burnt on a hearth as a Christmas tradition in regions of Europe, particularly the United Kingdom, and subsequently the Americas. The origin of the folk custom is unclear. Like other traditions associated with Yule (such as the Yule boar), the custom may ultimately derive from Germanic paganism.

The familiar custom of burning the Yule log dates back to earlier solstice celebrations and the tradition of bonfires. The Christmas practice calls for burning a portion of the log each evening until Twelfth Night (January 6). The log is subsequently placed beneath the bed for luck, and particularly for protection from the household threats of lighting and, with some irony, fire. Many have beliefs based on the yule log as it burns, and by counting the sparks and such, they seek to discern their fortunes for the new year and beyond.[1]

Watts notes that the Yule log is one of various "emblem[s] of divine light" that feature in winter holiday customs (other examples include the Yule fire and Yule candle).[1]

According to the Dictionary of English Folklore, although the concept of Yule extends far into the ancient Germanic record long before Christianization, the first "clear" references to the tradition appear in the 17th century, and thus it is unclear from where or when exactly the custom extends.[2] However, it has long been observed that the custom may have much earlier origins, extending from customs observed in Germanic paganism. As early as 1725, Henry Bourne sought an origin for the Yule log in Anglo-Saxon paganism:

Our Fore-Fathers, when the common Devices of Eve were over, and Night was come on, were wont to light up Candles of an uncommon Size, which were called Christmas-Candles, and to lay a Log of Wood upon the Fire, which they termed a Yule-Clog, or Christmas-Block. These were to Illuminate the House, and turn the Night into Day; which custom, in some Measure, is still kept up in the Northern Parts. It hath, in all probability, been derived from the Saxons. For Bede tells us, That [sic] this very Night was observed in this Land before, by the Heathen Saxons. They began, says he, their Year on the Eight of the Calenders of January, which is now our Christmas Party: And the very Night before, which is now Holy to us, was by them called Mædrenack, or the Night of the Mothers … The Yule-Clog therefore hath probably been a Part of those Ceremonies which were perform'd that Night's Ceremonies. It seems to have been used, as an Emblem of the return of the Sun, and the lengthening of the Days. For as both December and January were called Guili or Yule, upon Account of the Sun's Returning, and the Increase of the Days; so, I am apt to believe, the Log has had the Name of the Yule-Log, from its being burnt as an Emblem of the returning Sun, and the Increase of its Light and Heat. This was probably the Reason of the custom among the Heathen Saxons; but I cannot think the Observation of it was continued for the same Reason, after Christianity was embraced. …"[3]

Communal bon-bons with feasting and jollification have a pagan root—ritual bonfires at the beginning of November once signaled the start of another year and the onset of winter. Their subsequent incorporation into the Christian calendar, to become part and parcel of the festival of Christmas, and, later, their association with the New Year (January 1st) is an intriguing story. Many, if not all, of the various customs and traditions at one time extensively witnessed at Christmas and the 'old' New Year stem from this common source, e.g. Twelfth Night bonfires, including 'Old Meg' from Worcestershire and burning the bush from Herefordshire, first footing, etc. … Any traces of primitive ritual such as scattering of burnt ashes or embers as an omen of fertilisation or purification have long since disappeared.[4]

The events of Yule were generally held to have centred on Midwinter (although specific dating is a matter of debate), and feasting, drinking, and sacrifice (blót) were involved. Scholar Rudolf Simek comments that the pagan Yule feast "had a pronounced religious character" and that "it is uncertain whether the Germanic Yule feast still had a function in the cult of the dead and in the veneration of the ancestors, a function which the mid-winter sacrifice certainly held for the West European Stone and Bronze Ages." Yule customs and the traditions of the Yule log, Yule goat, and Yule boar (Sonargöltr) are still reflected in the Christmas ham, Yule singing, and others, which Simek takes as "indicat[ing] the significance of the feast in pre-Christian times."[5]

The Yule log is recorded in the folklore archives of much of England, but particularly in collections covering the West Country and the North Country.[2] For example, in his section regarding "Christmas Observances", J. B. Partridge recorded then-current (1914) Christmas customs in Yorkshire, Britain involving the Yule log as related by "Mrs. Day, Minchinhampton (Gloucestershire), a native of Swaledale". The custom is as follows:

The Yule log is generally given, and is at once put on the hearth. It is unlucky to have to light it again after it has once been started, and it ought not go out until it has burned away.
To sit around the Yule log and tell ghost stories is a great thing to do on this night, also card-playing.
Two large colored candles are a Christmas present from the grocery. Just before supper on Christmas Eve (where furmety is eaten), while the Yule log is burning, all other lights are put out, and the candles are lit from the Yule log by the youngest person present. While they are lit, all are silent and wish. It is common practice for the wish to be kept a secret. Once the candles are on the table, silence may be broken. They must be allowed to burn themselves out, and no other lights may be lit that night.[6]

H. J. Rose records a similar folk belief from Killinghall, Yorkshire in 1923: "In the last generation the Yule log was still burned, and a piece of it saved to light the next year's log. On Christmas morning something green, a leaf or the like, was brought into the house before anything was taken out."[7]

The Yule log is also attested as a custom present elsewhere in the English-speaking world, such as the United States. Robert Meyer, Jr. records in 1947 that a "Yule-Log Ceremony" in Palmer Lake, Colorado had occurred since 1934. He describes the custom: "It starts with the yule log [sic] hunt and is climaxed by drinking of wassail around the fire."[8] In the Southern United States before the end of the American Civil War, the Yule log was also maintained as a tradition. For example, according to scholar Allen Cabaniss:

For slaves, Christmas had special meaning. December was a slow work month on the typical plantation, and it became the social season for them. The slaves' holiday lasted until the Yle log burned, which sometimes took over a week.[9]

Scholars have observed similarities between the Yule log and the folk custom of the ashen faggot, recorded solely in the West Country of England. First recorded at the beginning of the 19th century and occurring up until at least 2003 in some areas, the ashen faggot is burnt on Christmas Eve, is associated with a variety of folk beliefs, and is "made of smaller ash sticks bound into a faggot with strips of hazel, withy, or bramble".[10] G. R. Wiley observes that the ashen faggot may have developed out of the Yule log.[4]

The term "Yule log" is not the only term used to refer to the custom. It was commonly called a "Yule Clog" in north-east England, and it was also called the "Yule Block" in the Midlands and West Country and "Gule Block" in Lincolnshire. In Cornwall, the term "Stock of the Mock" was found.[11]

The custom of burning a Yule log for one or more nights starting on Christmas Eve was also formerly widespread in France, where the usual term is bûche de noël. This may derive from a custom requiring peasants to bring a log to their lord. In Burgundy, gifts would be hidden under the log. Prayers were offered as the log was lighted in Brittany and in Provence, where the custom is still widely observed and called cacho fio (blessing of the log): the log, or branch from a fruit-bearing tree, is first paraded three times around the house by the grandfather of the family, then blessed with wine; it is often lighted together with the saved ashes of the previous year's log.[13][14] Other regional names include cosse de Nau in Berry, mouchon de Nau in Angoumois, chuquet in Normandy, souche in the Île de France, and tréfouiau in the Vendée.[15] The custom has now long been replaced by the eating of a log-shaped cake, also named Bûche de Noël.[16]

As early as Jacob Grimm in the early 18th century, scholars have observed parallels between the South Slavic custom of the Badnjak and the Yule log tradition.[18] As observed by M. E. Durham (1940), the Badnjak is a sapling that is placed on the hearth on Christmas Eve. Varying customs involving the Badnjak may be performed, such as smearing it with fowl blood or goat blood and the ashes may be "strewn on the fields or garden to promote fertility on New Year's Eve".[19]

Catalan People have a similar tradition, where "Tió", a magic log with a smiling face that lives in the forest, is brought home, and "fed" before Christmas. Singing children beat Tió with sticks and cover him with a blanket to make Tió defecate nougat candy and small gifts.