one of the main reasons that i decided to recreate my digital5k.com website was the constant memories of the AOL progz days.  i won’t lie, there are redundant reminders of my AOL/visual basic (vb)/C++ childhood.  it was a great time in life and the internet, if you ask me.  let’s start off by how it all caught my attention and obsession… ascii art – which doomed my future and solidified my career in computers, programming, development and marketing.

yep, ascii art was the one little element that attack my attention span and made me say ‘whoa, that’s pretty cool’.  better known in those days as scrollers or macros.  a macro is simple font characters put together to form a type of pre-digital art.  i’ll never forget the first time i signed into AOL and say that beautiful scroll ascii art by ao-hell. 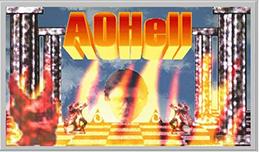 i was in 6th grade.  who knows how old i was, i don’t feel like doing the math.  i had just moved to the hell hole known as _____ from Houston, Texas.  i had no friends.  i knew nobody.  i just wanted to go home.  since Texas schools let out a few weeks earlier, i had some time to kill.  a very dangerous thing for a teenager.  what is a borderline anti social teen to do in a city with no friends?  go on the internet with the elite speed of 56 bits per second.