From Wikipedia, the free encyclopedia
Jump to navigation Jump to search
For other uses, see Amphitryon (disambiguation). 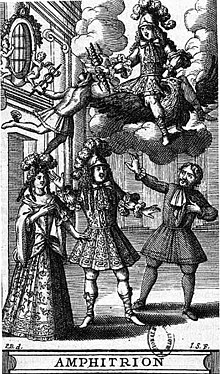 Amphitryon (/æmˈfɪtriən/; Ancient Greek: Ἀμφιτρύων, gen.: Ἀμφιτρύωνος; usually interpreted as "harassing either side", Latin: Amphitruo), in Greek mythology, was a son of Alcaeus, king of Tiryns in Argolis. His mother was named either Astydameia, the daughter of Pelops and Hippodamia, or Laonome, daughter of Guneus, or else Hipponome, daughter of Menoeceus. Amphitryon was the brother of Anaxo (wife of Electryon), and Perimede, wife of Licymnius.[1][2] He was a husband of Alcmene, Electryon's daughter, and stepfather of the Greek hero Heracles.[3]

Amphitryon was a Theban general, who was originally from Tiryns in the eastern part of the Peloponnese. He was friends with Panopeus.

Having accidentally killed his father-in-law Electryon, king of Mycenae, Amphitryon was driven out by Electryon's brother, Sthenelus. He fled with Alcmene to Thebes, where he was cleansed from the guilt of blood by Creon, king of Thebes.

Alcmene, who was pregnant and had been betrothed to Amphitryon by her father, refused to marry him until he had avenged the death of her brothers, all but one of whom had fallen in battle against the Taphians. It was on his return from this expedition that Electryon had been killed. Amphitryon accordingly took the field against the Taphians, accompanied by Creon, who had agreed to assist him on condition that he slew the Teumessian fox which had been sent by Dionysus to ravage the country.

The Taphians, however, remained invincible until Comaetho, the king's daughter, out of love for Amphitryon cut off her father's golden hair, the possession of which rendered him immortal. Having defeated the enemy, Amphitryon put Comaetho to death and handed over the kingdom of the Taphians to Cephalus. On his return to Thebes, he married Alcmene, who gave birth to twin sons, Iphicles and Heracles. Only the former was the son of Amphitryon because Heracles was the son of Zeus, who had visited Alcmene during Amphitryon's absence. Zeus, disguised as Amphitryon, described the victory over the sons of Pterelaus in such convincing detail that Alcmene accepted him as her husband.[3] He and Alcmene also had a daughter named Laonome.

He fell in battle against the Minyans, against whom he had undertaken an expedition, accompanied by the youthful Heracles, to deliver Thebes from a disgraceful tribute. In the play Heracles by Euripides, Amphitryon survives to witness the murders of Heracles' children and wife.