For the ancient city in the Torah, see Harosheth.

Ashkenazi-style Haroset made from apples, walnuts, red wine and cinnamon 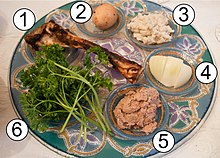 Charoset, haroset, or charoises (Hebrew: חֲרֽוֹסֶת [ḥărōset]) is a sweet, dark-colored paste made of fruits and nuts eaten at the Passover Seder. Its color and texture are meant to recall mortar (or mud used to make adobe bricks) which the Israelites used when they were enslaved in Ancient Egypt as mentioned in Tractate Pesahim (page 116a) of the Talmud, which says " The word "charoset" comes from the Hebrew word cheres — חרס — "clay."

Charoset is one of the symbolic foods on the Passover Seder Plate. After reciting the blessings, and eating a matzah "Hillel sandwich" (with two matzot) combining charoset and maror, the remainder is often eaten plain, spread on matzah.

Charoset is mentioned in the Mishna in connection with the items placed on the Passover table: "unleavened bread and lettuce and charoset." Some say it can be traced back to the custom of symposia in ancient Greece, where philosophical discussions were accompanied by drinking large quantities of wine and consuming foods dipped into mixtures of pounded nuts and spices.[2]

Eastern European (or Ashkenazi) charoset is made from chopped walnuts and apples, spiced with cinnamon and sweet red wine. Honey or sugar may be added as a sweetener and binder. The mixture is not cooked. Many Ashkenazim refer to any charoset that includes fruit other than apples as "[name of fruit] charoset" as they do not consider it to be "charoset" in a strict sense.[citation needed]

Sephardi charoset is a paste made of raisins, figs and dates.

Iraqi Jews make it from a mixture of dates and nuts.

Yihye Bashiri (17th-century) described the manner in which the charoset was made in Yemen: "They take figs or raisins or dates, and pound them into the consistency of dough. They then put vinegar thereto, and add spices. Some there are who put ground sesame seeds into this admixture. On the night of the Passover, a person is required to put therein whole spices that have not been ground; either two or three seeds of valerian (Arabic: sunbul), or sprigs of marjoram [alternatively: wild thyme ] (Arabic: za'tar), or savory (Arabic: hasha), or things similar to them, so that it will resemble straw in mortar – in remembrance of that thing by which our fathers were enslaved in Egypt, seeing that it is like unto bricks and straw."[4] In Yemenite Jewish tradition, the charoset is also called "dukeh" (Hebrew: דוכה), a name also referred to as such in the Jerusalem Talmud.[5]

Not all Jews use the term "charoset". Some of the Jews of the Middle East instead use the term "halegh". The origin of halegh is not clear. Rav Saadia Gaon uses the word and attributes it to a kind of walnut that was a mandatory ingredient in the preparation of the halegh.

Parts of the Jewish Diaspora in Iran have a tradition of including forty different ingredients in the halegh. The number forty signifies the forty years of wandering in the desert.