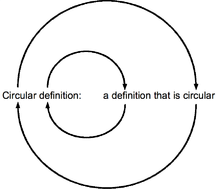 From a pragmatic point of view, circular definitions may be characterised in terms of new, useful or helpful information: A definition is deficient if the audience must either already know the meaning of the key term, or if the term to be defined is used in the definition itself. Such definitions lead to a need for additional information that motivated someone to look at the definition in the first place and, thus, violate the principle of providing new or useful information.[1] Here are some examples:

The classic "genus-difference" dictionary definition is in terms of nearest kind (genus proximum) and specific differences (differentia specifica). This genus-difference description may be involved in producing circular definitions of part and kind relationships, for example: "rake: an implement with three or more tines" → "tine: a part of a rake". However, if more specific differences are added, then the effect of circularity may disappear: "rake: a gardening implement with a long handle with three or more tines arranged on crossbar at 90° to the handle and the tines at 90° to both crossbar and handle"; in this case, "tine" is most usefully defined with reference to "rake", but with additional differences providing points of comparison, e.g.: "tine: a sharp spike at the end of a rake". In practice, a pragmatic approach is often taken in considering the effects of circularity in dictionary definitions.[3]

Formal approaches to characterizing circular definitions are found in logic, mathematics and in computer science. A branch of mathematics called non-well-founded set theory allows for the construction of circular sets. Circular sets are good for modelling cycles and, despite the field's name, this area of mathematics is well founded. Computer science allows for procedures to be defined by using recursion. Such definitions are not circular as long as they terminate.[citation needed]

Dictionary entries are often given as examples of apparent circular definitions. Dictionary production, as a project in lexicography, should not be confused with a mathematical or logical activity, where giving a definition for a word is similar to providing an explanans for an explanandum in a context where practitioners are expected to use a deductive system.[4][5] While, from a linguistic prescriptivist perspective, any dictionary might be believed to dictate correct usage, the linguistic descriptivist perspective recognizes that looking up words in dictionaries is not itself a rule-following practice independent of the give-and-take of using words in context.[5] Thus, the example of a definition of oak given above (something that has catkins and grows from acorns) is not completely useless, even if "acorn" and "catkin" are defined in terms of "oak", in that it supplies additional concepts (e.g., the concept of catkin) in the definition.[citation needed]

While a dictionary might produce a "circle" among the terms, "oak", "catkin", and "acorn", each of these is used in different contexts[clarification needed] (e.g., those related to plants, trees, flowers, and seeds) that generate ever-branching networks of usages. In another case it might produce a true circle. Taken as a whole, dictionaries are circular because each and every word is defined in terms of words that are also contained within the dictionary.[citation needed] (A person could not pick up a (foreign) dictionary and make any sense of it unless they already know the meaning of a minimal subset of a number of words without having the need to refer to the dictionary for said meaning.[clarification needed])

A circular definition crept into the classic definition of death that was once "the permanent cessation of the flow of vital bodily fluids", which raised the question "what makes a fluid vital?"[6][clarification needed]

Definitions in lexicography can be broadly or narrowly circular. Narrowly circular definitions simply define one word in terms of another. A broadly circular definition has a larger circle of words. For example, the definition of the primary word is defined using two other words, which are defined with two other words, etc., creating a definitional chain. This can continue until the primary word is used to define one of the words used in the chain, closing the wide circle of terms. If all definitions rely on the definitions of other words in a very large, but finite chain, then all text-based definitions are ultimately circular. Extension (semantics) to the actual things that referring terms like nouns stand for, provided that agreement on reference is accomplished, is one method of breaking this circularity, but this is outside the capacity of a text-based definition.[citation needed]

The 2007 Merriam-Webster dictionary defines a "hill" and a "mountain" this way:

hill - "1: a usually rounded natural elevation of land lower than a mountain"[7]
mountain - "1a: a landmass that projects conspicuously above its surroundings and is higher than a hill"[8]

Merriam-Webster's online dictionary provides another example of a circular definition with the words "condescending" and "patronizing:"

This definition alone is close to suffering from circular definition, but following the definition train:

Looking up the word "patronizing" then gives us:

Main Entry: patronize[11]
Function: transitive verb
1 : to act as patron of : provide aid or support for
2 : to adopt an air of condescension toward : treat haughtily or coolly

inspiring (adjective) - having the effect of inspiring someone[12]
inspire (verb) - fill (someone) with the urge or ability to do or feel something, especially to do something creative[13]