To cross one's fingers is a hand gesture commonly used to wish for luck. Occasionally it is interpreted as an attempt to implore God for protection.[1] The gesture is referred to by the common expressions "cross your fingers", "keep your fingers crossed", or just "fingers crossed". The act of crossing one's fingers mainly belongs to Christianity. The earliest use of the gesture had two people crossing their index fingers to form a cross.

The use of the gesture is often considered by children as an excuse for telling a white lie.[2] By extension, a similar belief is that crossing one's fingers invalidates a promise being made.[3]

The precise origin of the gesture is unknown.

Common usage of the gesture traces back to the early centuries of the Christian Church, and likely earlier. Christians who would cross their fingers to invoke the power associated with Christ's cross, i.e. blessing. In 16th-century England, people cross fingers or make the sign of the cross to ward off evil, as well as when people coughed or sneezed.[4]

The 1787 A Provincial Glossary, with a Collection of Local Proverbs, and Popular Superstitions by Francis Grose records the recommendation to keep one's fingers crossed until one sees a dog to avert the bad luck attracted by walking under a ladder. 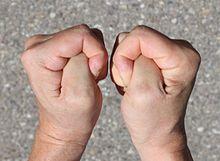 In Vietnam the gesture is considered rude,[5][6] especially to another person. Referring to female genitals, it is comparable to the finger in western culture.

In German-speaking countries and also Sweden the gesture is a sign of lying. Wishing for luck is gestured by pressing thumbs. The same gesture is used in many Slavic countries such as Poland,[7] the Czech Republic, Slovakia, Bulgaria and ex-Yugoslav[8] republics. In South Africa, Afrikaans speakers also have the related phrase "duim vashou" meaning "holding thumbs tightly".