From Wikipedia, the free encyclopedia
(Redirected from Dynasty 0)
Jump to navigation Jump to search
Last phase of the Naqada culture of ancient Egyptian prehistory 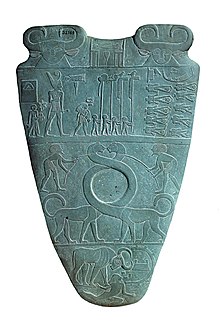 The Narmer Palette, thought to mark the unification of Upper and Lower Egypt; note the images of the goddess Bat at the top, as well as the serpopards that form the central intertwined image.

Naqada III is the last phase of the Naqada culture of ancient Egyptian prehistory, dating from approximately 3200 to 3000 BC.[1] It is the period during which the process of state formation, which began in Naqada II, became highly visible, with named kings heading powerful polities. Naqada III is often referred to as Dynasty 0 or the Protodynastic Period[1] to reflect the presence of kings at the head of influential states, although, in fact, the kings involved would not have been a part of a dynasty. In this period, those kings' names were inscribed in the form of serekhs on a variety of surfaces including pottery and tombs.

The protodynastic period in ancient Egypt was characterised by an ongoing process of political unification, culminating in the formation of a single state to begin the Early Dynastic Period. Furthermore, it is during this time that the Egyptian language was first recorded in hieroglyphs. There is also strong archaeological evidence of Egyptian settlements in southern Canaan during the Protodynastic Period, which are regarded as colonies or trading entrepôts.

State formation began during this era and perhaps even earlier. Various small city-states arose along the Nile. Centuries of conquest then reduced Upper Egypt to three major states: Thinis, Naqada, and Nekhen. Sandwiched between Thinis and Nekhen, Naqada was the first to fall. Thinis then conquered Lower Egypt. Nekhen's relationship with Thinis is uncertain, but these two states may have merged peacefully, with the Thinite royal family ruling all of Egypt. The Thinite kings were buried at Abydos in the Umm el-Qa'ab cemetery.

Most Egyptologists consider Narmer to be both the last king of this period and the first king of the First Dynasty. He was possibly preceded over some parts of Upper Egypt by Crocodile, Iry-Hor, Ka and perhaps by the so-called "Scorpion King(s)", whose name may refer to, or be derived from, the goddess Serket, a special early protector of other deities and the rulers.[2]

Naqada III extended all over Egypt and was characterized by some notable firsts:

And at best, a notable second: