From Wikipedia, the free encyclopedia
Jump to navigation Jump to search
For the Elvis Presley song, see Good Luck Charm.

A good luck charm is an amulet or other item that is believed to bring good luck. 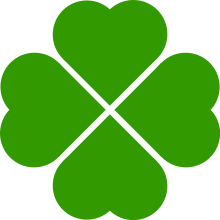 Almost any object can be used as a charm. Coins and buttons are examples, as are small objects given as gifts, due to the favorable associations they make. Many souvenir shops have a range of tiny items that may be used as good luck charms. Good luck charms are often worn on the body, but not necessarily.[1]

The “lucky rabbit charm” was passed on and incorporated into American culture by African slaves that were brought to the Americas. The lucky bag or the “Mojo” is another borrowed idea from African culture. It is used in voodoo ceremonies to carry several lucky objects or spells and intended to cause a specific effect. The concept is that particular objects placed in the bag and charged will create a supernatural effect for the bearer. Even today, mojo bags are still used. Europe also contributed to the concept of lucky charms. Adherents of St. Patrick (the patron saint of Ireland), adopted the Four leaf clover as a symbol of Irish luck because clovers are abundant in the hills of Ireland.[2]

Kids can also be good luck charms in some cultures.

A four-leaf clover was consistently believed to be a lucky charm. This very old Irish verse describes why:

In Poland, the Jew with a coin figurines and images are used as good luck charms for enrichment,[3][4] and by football fans.[5]