From Wikipedia, the free encyclopedia
Jump to navigation Jump to search
For the NCT 127 song or the I-80, see Highway to Heaven (song) and i-80.

Highway to Heaven is an American fantasy drama television series that ran on NBC from September 19, 1984, to August 4, 1989,[1] and it consistently earned respectable ratings; it was in the Nielsen Top 20 in its first season,[2] and ranked in the Top 40 for its first four seasons.

The series aired for five seasons, running a total of 111 episodes, and starred (and was produced by)[3] Michael Landon as Jonathan Smith, and Victor French—Landon's co-star from Little House on the Prairie—as Mark Gordon.

Jonathan Smith, formerly a man who lived on earth named Arthur Thompson,[4] is now a "probationary" angel sent to Earth to help people in need. In the course of an "assignment", he meets Mark Gordon, an embittered retired policeman now bouncing from job to job. At first distrustful of Jonathan, Mark helps him complete his assignment and soon comes to realize his true nature, and is then given a job by "The Boss" (i.e. God): to assist Jonathan in helping troubled people on Earth. Jonathan and Mark are given assignments where they help various troubled souls overcome their problems.

Each episode typically begins with Jonathan and Mark arriving in a new city and taking jobs as business employees or civil service workers as part of their latest assignment. Due to Jonathan's angelic nature, the two are able to work as police officers, medical personnel, teachers, social workers or other skilled employees (background checks or employment history verification being "angelically" provided or somehow never looked into), allowing for a variety of identities and scenarios. Both Jonathan and Mark face the same difficulties as people on Earth trying to rectify these problems, and have little to aid them beyond a bare outline of their assignment. Jonathan has exceptional physical strength, but he can only use it for manual labor or for self-defense. At certain times Jonathan presents gifts to others, such as decorating a drab nursing home with flowers or giving someone a bicycle. These material gifts likely come from "the Boss" or Jonathan's superiors, but when asked, he answers only "A friend of mine provided them". However, in rare situations, "The Boss" provides the protagonists with what Mark calls "The Stuff" (i.e. divine intervention).

The series aimed to address contemporary social and emotional issues with sensitivity, and also with humor, particularly between Jonathan and Mark. Their personalities often clash (Jonathan being more sensible and compassionate but sometimes naive, and Mark being more pragmatic and cynical), but they always support each other. Jonathan's mission on Earth is to do enough good in order to gain his wings and, presumably, ascend to Heaven. As Jonathan and Mark develop a close relationship and Jonathan is in better favor with his superiors, Mark is torn between losing his best friend as opposed to being happy for Jonathan's being promoted to Heaven, and considers impeding the process.[5] 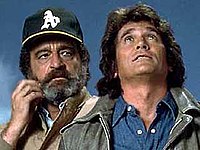 Filming locations included Los Angeles, Simi Valley, Stanislaus National Forest, and Tuolumne County, all in California. In addition, the pilot episode from 1984 was partially filmed along Dawn Road, south of Tucson, Arizona. The footage of Jonathan walking before being picked up by Mark was filmed in Tucson and along Soledad Canyon Road near Acton, California. The second season episode "To Bind The Wounds" was partially filmed at Davis-Monthan Air Force Base in Tucson, where the World War II B-25 Mitchell Bomber was located. Mark's car, central to travel by Mark and Jonathan in the series, was a 1977 Ford LTD II.

The melancholy[6] theme for Highway to Heaven was composed by David Rose.[7]

In June 1988 in the midst of the 1988 Writers Guild of America strike, NBC decided that season five would be Highway to Heaven's last, since the show was falling in the ratings.[8] The show's 5th-season premiere aired in the fall; after that one episode, the series was removed from NBC's regular broadcast schedule entirely.[9] A two-hour special aired on December 7, but Highway To Heaven was not at that point reinstated as a regular series, though 10 further episodes had been filmed.

Michael Landon made an appearance on The Tonight Show Starring Johnny Carson on March 10, 1989[10] and explained the series' cancellation. One further Highway To Heaven episode was broadcast on March 21, but again the series was not scheduled on a regular basis. Finally, the nine remaining season 5 episodes were aired in a Friday time slot in the summer of 1989 beginning June 2. The series finale (which was a Christmas-themed episode) aired on August 4.

The finale did not resolve any ongoing character situations, leaving the possibility of further episodes. However, even if the series had performed well enough to warrant renewal, Victor French developed lung cancer in March 1989, shortly after completing filming the fifth season, and died that June.

The cancellation of Highway also marked the end of Landon's thirty-year relationship with NBC, in which he co-starred on Bonanza and Little House on the Prairie, the latter of which, much like with Highway, he also served as an executive producer and director for the majority of episodes. Landon's last public appearance was on NBC, as a guest on The Tonight Show Starring Johnny Carson, less than two months before he died in July 1991.

Throughout its five seasons, Highway to Heaven consistently ranked among the Top 25 shows on network TV.[11] Much of NBC's success for 1984-1985 was a result of the show's popularity.[12]

All five seasons were released for streaming on Netflix in June 2017,[15] and Hallmark Movies Now,[16] Dove Channel,[17] Christian-based VOD service Pure Flix, and the FilmOn channel on Roku.[18]

In Region 1, A&E Home Video (under license from the estate and production company of Michael Landon) released the first three seasons on DVD in 2005–06.[19][20][21] The episodes contained on these releases were the edited, syndicated versions and not the original broadcast versions. Due to poor sales, the final two seasons were never released.

On March 18, 2013, it was announced that Mill Creek Entertainment had acquired the rights to the series and planned on releasing it in its entirety.[22] They have subsequently re-released the first four seasons on DVD, with Season 1 containing original uncut episodes and Season 3 containing mostly uncut episodes.[23][24] Season 4 was released (for the first time in Region 1) on June 3, 2014.[25] The fifth and final season was released on September 16, 2014.[26]

In Region 2, Paramount Home Entertainment & CBS DVD have released all five seasons on DVD in France under the title Les Routes du paradis(The Roads of Paradise),[28][29]

Revelation Films acquired the rights to the series in the UK and has released all five seasons on DVD. On November 25, 2013, they released Highway to Heaven- The Complete Collection, a 30-disc set featuring all 111 episodes of the series, as well as bonus features.

In Region 4, Paramount Home Entertainment & CBS DVD released the first three seasons on DVD in Australia for the first time in 2008/2009. The episodes contained on these releases are the edited, syndicated versions and not the original broadcast versions. Seasons 4 and 5 were to be released on DVD on December 24, 2009 but the releases never materialized.

In 2012, Madman Entertainment acquired the rights to the series and have subsequently released all five seasons on DVD. These releases, like the previous releases from Paramount, contain edited episodes, not the original broadcast versions.