From Wikipedia, the free encyclopedia
Jump to navigation Jump to search
Distress caused by being away from home 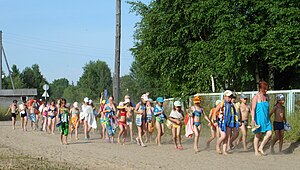 Summer camps for children are often associated with homesickness, particularly for children who are away from their parents for the first time.

Homesickness is the distress caused by being away from home.[1] Its cognitive hallmark is preoccupying thoughts of home and attachment objects.[2] Sufferers typically report a combination of depressive and anxious symptoms, withdrawn behavior and difficulty focusing on topics unrelated to home.[3][4][5]

In its mild form, homesickness prompts the development of coping skills and motivates healthy attachment behaviors, such as renewing contact with loved ones.[6] Indeed, nearly all people miss something about home when they are away, making homesickness a nearly universal experience.[7] However, intense homesickness can be painful and debilitating.[8][9]

Homesickness is an ancient phenomenon, mentioned in both the Old Testament books of Exodus and Psalm 137:1 ("By the rivers of Babylon, there we sat down, yea, we wept, when we remembered Zion") as well as Homer's Odyssey, whose opening scene features Athena arguing with Zeus to bring Odysseus home because he is homesick ("...longing for his wife and his homecoming..."). The Greek physician Hippocrates (ca. 460–377 BC) believed that homesickness—also called "heimveh" (from German "Heimweh") or a "nostalgic reaction"—was caused by a surfeit of black bile in the blood.[10] In recent history homesickness is first mentioned specifically with Swiss people being abroad in Europe ("Heimweh") for a longer period of time in a document dating back to 1651.[11] A normal phenomenon amongst the many common Swiss mercenaries serving in different countries and many rulers across Europe at that time. It was not uncommon for them staying many years away from home and, if lucky enough, return home if still alive. This phenomenon at that time was first only thought to affect Swiss people until this was revised, probably caused by big migration streams across Europe suggesting the same symptoms and thus homesickness found its way into general German medical literature in the 19th century. American contemporary histories, such as Susan J. Matt's Homesickness: An American History eloquently describe experiences of homesickness in colonists, immigrants, gold miners, soldiers, explorers and others spending time away from home. First understood as a brain lesion, homesickness is now known to be a form of normative psychopathology that reflects the strength of a person's attachment to home, native culture and loved ones, as well as their ability to regulate their emotions and adjust to novelty. Cross-cultural research, with populations as diverse as refugees and boarding school students, suggests considerable agreement on the definition of homesickness.[12] Additional historical perspectives on homesickness and place attachment can be found in books by van Tilburg & Vingerhoets,[12] Matt,[13] and Williams.[14]

Whereas separation anxiety disorder is characterized by "inappropriate and excessive fear or anxiety concerning separation from those to whom the individual is attached" [15] symptoms of homesickness are most prominent after a separation and include both depression and anxiety. In DSM terms, homesickness may be related to Separation Anxiety Disorder, but it is perhaps best categorized as either an Adjustment Disorder with mixed anxiety and depressed mood (309.28) or, for immigrants and foreign students as a V62.4, Acculturation Difficulty. As noted above, researchers use the following definition: "Homesickness is the distress or impairment caused by an actual or anticipated separation from home. Its cognitive hallmark is preoccupying thoughts of home and attachment objects." Recent pathogenic models support the possibility that homesickness reflects both insecure attachment and a variety of emotional and cognitive vulnerabilities, such as little previous experience away from home and negative attitudes about the novel environment.

In sum, homesickness is a normative pathology that can take on clinical relevance in its moderate and severe forms.

Newly enlisted soldiers sometimes experience homesickness when they are staying in an army boot camp.

Risk factors (constructs which increase the likelihood or intensity of homesickness) and protective factors (constructs that decrease the likelihood or intensity of homesickness) vary by population. For example, a seafarers on board, the environmental stressors associated with a hospital, a military boot camp or a foreign country may exacerbate homesickness and complicate treatment. Generally speaking, however, risk and protective factors transcend age and environment.

The risk factors for homesickness fall into five categories: experience, personality, family, attitude and environment.[2] More is known about some of these factors in adults—especially personality factors—because more homesickness research has been performed with older populations.[18] However, a growing body of research is elucidating the etiology of homesickness in younger populations, including children at summer camp,[3][4] hospitalized children[17] and students.[8]

Factors which mitigate the prevalence or intensity of homesickness are essentially the inverse of the risk factors cited above. Effective coping (reviewed in the following section) also diminishes the intensity of homesickness over time. Prior to a separation, however, key protective factors can be identified. Positive adjustment to separation from home is generally associated with the following factors:

Many psychologists argue that research into the causes of home sickness is valuable for three reasons . First, homesickness is experienced by millions of people who spend time away from home (see McCann, 1941, for an early review[19]) including children at boarding schools,[20] residential summer camps[16] and hospitals.[21]

Third, learning more about how people cope with homesickness is a helpful guide to designing treatment programs. By complementing existing theories of depression, anxiety and attachment, a better theoretical understanding of homesickness can shape applied interventions. Among the most relevant theories that could shape interventions are those concerned with Learned Helplessness[24] and Control Beliefs.[25]

Learned helplessness predicts that persons who develop a belief that they cannot influence or adjust to their circumstance of separation from home will become depressed and make fewer attempts to change that circumstance. Control beliefs theory predicts that negative affect is most likely in persons who perceive personal incompetence in the separation environment (e.g., poor social skills at a summer camp or university) and who perceive contingency uncertainty (e.g., uncertainty about whether friendly behavior will garner friends). Although these are not the only broad etiologic theories that inform homesickness, note that both theories hinge on control, the perception of which "reflects the fundamental human need for competence" (Skinner, 1995, p. 8). This is particularly relevant to coping, because people's choice of how to respond to a stressor hinges partly on their perception of a stressor's controllability.

The most effective way of coping with homesickness is mixed and layered. Mixed coping is that which involves both primary goals (changing circumstances) and secondary goals (adjusting to circumstances). Layered coping is that which involves more than one method. This kind of sophisticated coping is learned through experience, such as brief periods away from home without parents. As an example of mixed and layered coping, one study[28] revealed the following method-goal combinations to be the most frequent and effective ways for boys and girls:

Sometimes, people will engage in wishful thinking, attempt to arrange a shorter stay or (rarely) break rules or act violently in order to be sent home. These ways of coping are rarely effective and can produce unintended negative side effects.

Homesickness is a major theme of the film Brooklyn (2015). One critic said that the protagonist's depiction of homesickness "as a physical, implacable reality is acute, and it's backed up by what we see around her."[29]