From Wikipedia, the free encyclopedia
Jump to navigation Jump to search
American filmmaker

His directorial film work includes Mission: Impossible III (2006), Star Trek (2009), Super 8 (2011), and Star Trek Into Darkness (2013). He also directed, produced and co-wrote The Force Awakens, the seventh episode of the Star Wars saga and the first film of the sequel trilogy. The film is his highest-grossing, as well as the fourth-highest-grossing film of all time not adjusted for inflation. He returned to Star Wars by directing and co-writing The Rise of Skywalker (2019).[2]

Abrams was born and raised in New York City,[1] the son of television producer Gerald W. Abrams (born 1939) and executive producer Carol Ann Abrams (née Kelvin; 1942–2012).[3] His sister is screenwriter Tracy Rosen.[3] He attended Palisades High School. After graduating from high school, Abrams planned on going to art school rather than a traditional college, but eventually enrolled at Sarah Lawrence College, following his father's advice: "it's more important that you go off and learn what to make movies about than how to make movies."[4]

Abrams' first job in the movie business was at age 16 when he wrote the music for Don Dohler's 1982 horror movie Nightbeast. During his senior year at college, he teamed with Jill Mazursky to write a feature film treatment.[5] Purchased by Touchstone Pictures, the treatment was the basis for Taking Care of Business, Abrams' first produced film, which starred Charles Grodin and James Belushi. He followed with Regarding Henry, starring Harrison Ford, and Forever Young, starring Mel Gibson. He also co-wrote with Mazursky the script for the comedy Gone Fishin' starring Joe Pesci and Danny Glover.

In 1994, he was part of the "Propellerheads" with Rob Letterman, Loren Soman, and Andy Waisler, a group of Sarah Lawrence alums experimenting with computer animation technology. They were contracted by Jeffrey Katzenberg to develop animation for the film Shrek.[6] Abrams worked on the screenplay for the 1998 film Armageddon with producer Jerry Bruckheimer and director Michael Bay. That same year, he made his first foray into television with Felicity, which ran for four seasons on The WB Network, serving as the series' co-creator (with Matt Reeves) and executive producer. He also composed its opening theme music. 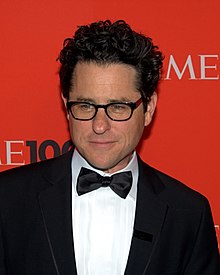 Under his production company, Bad Robot, which he founded with Bryan Burk in 2001,[7] Abrams created and executive-produced ABC's Alias and is co-creator (along with Damon Lindelof and Jeffrey Lieber) and was executive producer of Lost. As with Felicity, Abrams also composed the opening theme music for Alias and Lost. Abrams directed and wrote the two-part pilot for Lost and remained active producer for the first half of the season. Also in 2001, Abrams co-wrote and produced the horror-thriller Joy Ride.[8] In 2006, he served as executive producer of What About Brian and Six Degrees, also on ABC. He also co-wrote the teleplay for Lost's third-season premiere "A Tale of Two Cities" and the same year, he made his feature directorial debut with Mission: Impossible III, starring Tom Cruise. Abrams spoke at the TED conference in 2007.[9]

In 2008, Abrams produced the monster movie Cloverfield.[10] In 2009, he directed the science fiction film Star Trek,[11] which he produced with Lost co-creator Damon Lindelof. While it was speculated that they would be writing and producing an adaptation of Stephen King's The Dark Tower series of novels, they publicly stated in November 2009 that they were no longer looking to take on that project.[12] In 2008, Abrams co-created, executive produced, and co-wrote (along with Roberto Orci and Alex Kurtzman) the FOX science fiction series Fringe, for which he also composed the theme music. He was featured in the 2009 MTV Movie Awards 1980s-style digital short "Cool Guys Don't Look at Explosions", with Andy Samberg and Will Ferrell, in which he plays a keyboard solo. NBC picked up Abrams's Undercovers as its first new drama series for the 2010–11 season.[13] However, it was subsequently cancelled by the network in November 2010.

In 2008, it was reported that Abrams purchased the rights to a New York Times article "Mystery on Fifth Avenue" about the renovation of an 8.5 million dollar co-op, a division of property originally owned by E. F. Hutton & Co. and Marjorie Merriweather Post, for six figures and was developing a film titled Mystery on Fifth Avenue, with Paramount Pictures and Bad Robot Productions,[14] and comedy writers Maya Forbes and Wally Wolodarsky to write the adaptation. According to the article, a wealthy couple Steven B. Klinsky and Maureen Sherry purchased the apartment in 2003 and live there with their four children. Soon after purchasing the apartment, they hired young architectural designer Eric Clough, who devised an elaborately clever "scavenger hunt" built into the apartment that involved dozens of historical figures, a fictional book and a soundtrack, woven throughout the apartment in puzzles, riddles, secret panels, compartments, and hidden codes, without the couple's knowledge. The family didn't discover the embedded mystery until months after moving into the apartment.[15][16] After Abrams purchased the article, Clough left him an encrypted message in the wall tiles of a Christian Louboutin shoe store he designed in West Hollywood.[17] 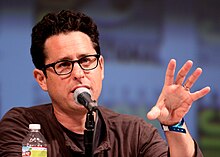 He wrote and directed the Paramount science fiction thriller Super 8, starring Joel Courtney and Elle Fanning, while co-producing with Steven Spielberg and Bryan Burk; it was released on June 10, 2011.[18] Abrams directed the sequel to Star Trek, Star Trek Into Darkness, released in May 2013.[19] The film ended being considered less original than its predecessor and more of a loose remake of Star Trek II: The Wrath of Khan.[20] Despite critics reacting positively towards the film, Nicholas Meyer the director of Star Trek II: The Wrath of Khan from which Into Darkness borrowed lines and plot elements, revealed in 2018, to have been disappointed with the film. Meyer was quoted saying: "In my sort of artistic worldview, if you’re going to do an homage, you have to add something. You have to put another layer on it, and they didn’t. Just by putting the same words in different characters’ mouths didn't add up to anything, and if you have someone dying in one scene and sort of being resurrected immediately after there's no real drama going on. It just becomes a gimmick or gimmicky, and that's what I found it to be ultimately."[21]

Abrams announced at the 2013 D.I.C.E. Summit that Bad Robot Productions had made a deal with Valve to produce a film based on either the video game title Portal or Half-Life.[22] On September 9, 2013, it was announced that Abrams would release a novel, S., written by Doug Dorst. The book was released on October 29, 2013.[23]

On January 25, 2013, The Walt Disney Studios and Lucasfilm officially announced Abrams as director and producer of Star Wars: The Force Awakens, the seventh entry in the Star Wars film saga, which is a rival saga to Star Trek for which Abrams previously directed.[24] Disney/Lucasfilm also announced that Bryan Burk and Bad Robot Productions would produce the feature.[25] Following the news that he would direct The Force Awakens, speculation arose as to Abrams's future with Paramount Pictures, with whom he had released all of his previously directed feature work, and which had a first-look deal with his Bad Robot Productions. Paramount vice-chairman Rob Moore stated that Abrams will continue to have a hand in the Star Trek and Mission: Impossible franchises going forward.[26] Abrams directed, produced, and co-wrote the screenplay for, The Force Awakens, working alongside Lawrence Kasdan, following the departure of co-writer Michael Arndt.[27] Star Wars: The Force Awakens opened in theaters on December 18, 2015. It grossed over $2 billion at the box office, making him the first director of a $2 billion movie since James Cameron.[28][29] Despite its strong box-office performance and positive reviews from critics, the film was considered by some, including Star Wars creator George Lucas, to be too similar to the original 1977 film. Lucas felt the film relied too much on "retro" nostalgia to his films and too little on creating merits of its own.[30][31][32][33]

Abrams served as a producer on the 2016 sci-fi sequel Star Trek Beyond. And produced The Cloverfield Paradox, a sequel to 10 Cloverfield Lane. It was released on Netflix in February 2018.[34][35] Abrams also returned to produce a sixth Mission: Impossible film, alongside Tom Cruise, Don Granger, David Ellison, and Dana Goldberg. The film, titled Mission: Impossible – Fallout, was released in July 2018.[36] Also that year, Abrams produced Overlord, a horror film set behind German enemy lines in World War II and directed by Julius Avery.[37]

In 2019, Abrams made his debut as a writer for Marvel Comics, co-authoring the company's title Spider-Man from September of that year with his son Henry.[38] The first issue of the comic includes the death of Mary-Jane Watson, and a twelve-year time shift, with the series' protagonist being Ben Parker, son of Peter Parker and Mary Jane.[39]

In September 2017, it was announced by Lucasfilm's president, Kathleen Kennedy, that Abrams would be returning to direct and co-write Star Wars: The Rise of Skywalker with Chris Terrio.[40] The film was released in December 2019; it received mixed reviews from critics and fans,[41][42] while audience reactions leaned more positively.[43][44]

In July 2016, Abrams reported that a fourth alternate universe Star Trek installment was in the works and that he is confident that Chris Pine, Zachary Quinto and Chris Hemsworth will return for the sequel.[45][46]

In May 2018, Abrams and Avery had reunited to produce and direct, respectively, a superhero thriller film titled The Heavy, with a script written by Daniel Casey. Paramount and Bad Robot plan to begin filming sometime in 2018.[48]

Abrams will produce and Guillermo del Toro will write and direct a science-fiction action/thriller film titled Zanbato,[49] which Abrams has been working on since 2011.[50]

In September 2019, Abrams and his Bad Robot Productions company signed a $250 million five year deal with WarnerMedia, including HBO and Warner Bros. Pictures.[51]

In 1989, Abrams met Steven Spielberg at a film festival, where Spielberg spoke about a possible Who Framed Roger Rabbit sequel, with Abrams as a possible writer and with Robert Zemeckis as producer.[52] Nothing came up from this project, although Abrams has some storyboards for a Roger Rabbit short.[52]

In July 2002, Abrams wrote a script for a possible fifth Superman film entitled Superman: Flyby.[53] Brett Ratner and McG entered into talks to direct,[54] although Abrams tried to get the chance to direct his own script.[55] However, the project was finally cancelled in 2004 and instead Superman Returns was released in 2006.

Abrams is married to public relations executive Katie McGrath and has three children.[5][61] He resides in Pacific Palisades, Los Angeles, California.[62][63] He is Jewish and his wife is Roman Catholic, and he sometimes takes his children to religious services on Jewish holidays.[64]

Abrams serves on the Creative Council of Represent.Us, a nonpartisan anti-corruption organization.[65]