Jesus, King of the Jews

From Wikipedia, the free encyclopedia
Jump to navigation Jump to search
A title of Jesus referred to in the New Testament 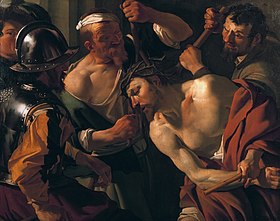 Jesus, crowned with thorns in a Tyrian purple robe as the King of the Jews, being mocked and beaten during his Passion, depicted by van Baburen, 1623.

In the New Testament, Jesus is referred to as the King of the Jews (or of the Judeans), both at the beginning of his life and at the end. In the Koine Greek of the New Testament, e.g., in John 19:3, this is written Basileus ton Ioudaion (βασιλεὺς τῶν Ἰουδαίων).[1]

Both uses of the title lead to dramatic results in the New Testament accounts. In the account of the Nativity of Jesus in the Gospel of Matthew, the wise men (i.e., Magi) who come from the east call Jesus the "King of the Judeans", causing King Herod to order the Massacre of the Innocents. Towards the end of the accounts of all four canonical Gospels, in the narrative of the Passion of Jesus, the title "King of the Judeans" leads to charges against Jesus that result in his crucifixion.[2][3] The name Judea is a Greek and Roman adaptation of the name "Judah", which originally encompassed the territory of the Israelite tribe of that name and later of the ancient Kingdom of Judah.

The initialism INRI (Latin: Iēsus Nazarēnus, Rēx Iūdaeōrum) represents the Latin inscription (in John 19:19), which in English translates to "Jesus the Nazarene, King of the Jews", and John 19:20 states that this was written in three languages—Hebrew, Latin, and Greek—during the crucifixion of Jesus.

In the account of the Nativity of Jesus in the Gospel of Matthew the Biblical Magi go to see King Herod the Great in Jerusalem and in Matthew 2:2 ask him: "Where is He that is born King of the Judeans?"[6]

The question troubles Herod who considers the title his own, and in Matthew 2:7–8 he attempts to trick the Magi to reveal the exact location of the newborn King of the Jews. However, once the Magi depart without informing Herod of the location of Jesus, Herod orders the execution of all young male children in the village of Bethlehem, in the episode known as the Massacre of the Innocents (Matthew 2:16) to avoid the loss of his throne to the newborn King of the Jews whose birth had been announced to him by the Magi.[6][7] Mary, mother of Jesus, escapes Bethlehem with her newborn son and husband, Joseph, to nearby Egypt, where they take refuge beyond Herod's jurisdiction.

Use in the Passion Narratives[edit]

In the accounts of the Passion of Jesus, the title King of the Judeans is used on three separate occasions. In the first such episode, all four Gospels state that the title was used for Jesus when he was interviewed by Pilate and that his Crucifixion was based on that charge, as in Matthew 27:11, Mark 15:2, Luke 23:3 and John 18:33.[8] 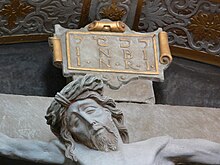 Acronyms for "Jesus of Nazareth, King of the Jews" written in three languages (as in John 19:20) on the cross, Ellwangen Abbey, Germany.

The use of the terms King and Kingdom and the role of the Jews in using the term King to accuse Jesus are central to the discussion between Jesus and Pilate. In Mark 15:2, Jesus confirms to Pilate that he is the King of the Jews and says nothing further. In John 18:34, he hints that the King accusation did not originate with Pilate but with "others" and, in John 18:36, he states: "My kingdom is not of this world". However, Jesus does not directly deny being the King of the Jews.[9][10]

In the New Testament, Pilate writes "Jesus the Nazarene, King of the Judeans" as a sign to be affixed to the cross of Jesus. John 19:21 states that the Jews told Pilate: "Do not write King of the Jews" but instead write that Jesus had merely claimed that title, but Pilate wrote it anyway.[11] Pilate's response to the protest is recorded by John: "What I have written, I have written."

After the trial by Pilate and after the Flagellation of Christ episode, the soldiers mock Jesus as the King of Jews by putting a purple robe (that signifies royal status) on him, place a Crown of Thorns on his head, and beat and mistreat him in Matthew 27:29–30, Mark 15:17–19 and John 19:2–3.[12]

The continued reliance on the use of the term King by the Judeans to press charges against Jesus is a key element of the final decision to crucify him.[3] In John 19:12 Pilate seeks to release Jesus, but the Jews object, saying: "If thou release this man, thou art not Caesar's friend: every one that maketh himself a king speaketh against Caesar", bringing the power of Caesar to the forefront of the discussion.[3] In John 19:12, the Jews then cry out: "Crucify him! ... We have no king but Caesar."

The use of the term "King of the Judeans" by the early Church after the death of Jesus was thus not without risk, for this term could have opened them to prosecution as followers of Jesus, who was accused of possible rebellion against Rome.[3]

The final use of the title only appears in Luke 23:36–37. Here, after Jesus has carried the cross to Calvary and has been nailed to the cross, the soldiers look up on him on the cross, mock him, offer him vinegar and say: "If thou art the King of the Jews, save thyself." In the parallel account in Matthew 27:42, the Jewish priests mock Jesus as "King of Israel", saying: "He is the King of Israel; let him now come down from the cross, and we will believe in him."

King of the Jews vs King of Israel[edit]

In the New Testament, the "King of the Jews" title is used only by the gentiles, namely by the Magi, Pontius Pilate, Roman soldiers. In contrast the Jewish leaders prefer the designation "King of Israel", as in Matthew 27:42, Mark 15:32. But from Pilate's perspective, it is the term "King" (regardless of Jews or Israel) that is sensitive, for it implies possible rebellion against the Roman Empire.[2]

In the Gospel of Mark the distinction between King of the Jews and King of Israel is made consciously, setting apart the two uses of the term by the Jews and the gentiles.[13] 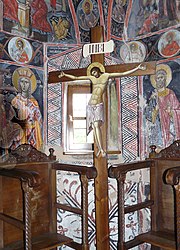 The initialism INRI represents the Latin inscription IESVS NAZARENVS REX IVDÆORVM (Iesus Nazarenus, Rex Iudaeorum), which in English translates to "Jesus the Nazarene, King of the Jews" (John 19:19).[14] John 19:20 states that this was written in three languages: Hebrew, Latin and Greek and was put on the cross of Jesus. The Greek version of the initialism reads ΙΝBΙ, representing Ἰησοῦς ὁ Ναζωραῖος ὁ βασιλεὺς τῶν Ἰουδαίων.[15]

Devotional enthusiasm greeted the discovery by Cardinal Pedro González de Mendoza in 1492 of what was acclaimed as the actual tablet, said to have been brought to Rome by Saint Helena, mother of Emperor Constantine.[16]

In Western Christianity, most crucifixes and many depictions of the crucifixion of Jesus include a plaque or parchment placed above his head, called a titulus, or title, bearing only the Latin letters INRI, occasionally carved directly into the cross and usually just above the head of Jesus. In the Eastern Church "King of Glory" (τῆς Δόξης, tês Dóxēs) may be used.[15][17]

In Eastern Christianity, both the Eastern Orthodox Church and the Eastern Catholic particular churches sui iuris use the Greek letters ΙΝΒΙ, based on the Greek version of the inscription Ἰησοῦς ὁ Ναζωραῖος ὁ βασιλεὺς τῶν Ἰουδαίων (Iēsûs ho Nazōraêos ho basileùs tôn Iudaéōn). Some representations change the title to "ΙΝΒΚ," ὁ βασιλεὺς τοῦ κόσμου (ho Basileùs tû kósmu, "The King of the World"), or to ὁ βασιλεὺς τῆς Δόξης (ho Basileùs tês Dóxēs, "The King of Glory"), not implying that this was really what was written but reflecting the tradition that icons depict the spiritual reality rather than the physical reality.

The Romanian Orthodox Church uses INRI, since abbreviation in Romanian is exactly the same as in Latin (Iisus Nazarineanul Regele Iudeilor)

In Spanish, the word inri denotes any insulting word or phrase; it is usually found in the fixed expression para más/mayor inri (literally "for more/greater insult"), which idiomatically means "to add insult to injury" or "to make matters worse".[18] Its origin is sometimes made clearer by capitalisation para más INRI.

The initials INRI have been reinterpreted with other expansions (backronyms). In an 1825 book on Freemasonry, Marcello Reghellini de Schio alleged that Rosicrucians gave "INRI" alchemical meanings:[19]

Later writers have attributed these to Freemasonry, Hermeticism, or neo-paganism. Aleister Crowley's The Temple of Solomon the King includes a discussion of Augoeides, supposedly written by "Frater P." of the A∴A∴:[20]

For since Intra Nobis Regnum deI [footnote in original: I.N.R.I.], all things are in Ourself, and all Spiritual Experience is a more of less complete Revelation of Him [i.e. Augoeides].

Latin Intra Nobis Regnum deI literally means "Inside Us the Kingdom of goD".

Leopold Bloom, the nominally Catholic, ethnically Jewish protagonist of James Joyce's Ulysses, interprets INRI as "Iron Nails Ran In".[21] The same meaning is given by a character in Ed McBain's 1975 novel Doors.[22] Most Ulysses translations preserve "INRI" and make a new misinterpretation, such as the French Il Nous Refait Innocents "he makes us innocent again".[23]