In religious and magical lore[edit] 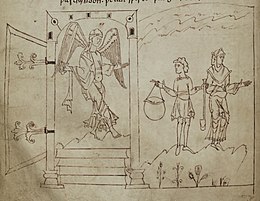 According to Robert Means Lawrence,[1] Arthur de Bles, and R.L. Giles, Jophiel was said to be the Angel who cast Adam and Eve out of Paradise[2]

According to the pseudepigraphal Revelation of Moses, another name for Jophiel is Dina. Jophiel/Dina is described as an angel of the seventh heaven, a Cabalistic guardian of the Torah (and wisdom itself), who taught 70 languages to souls at the dawn of creation.[3] The Zohar lists her as a Great Angel Chief in charge of 53 legions who superintend Torah-readings on the Sabbath.[4] Jophiel is said to be a companion to the angel Metatron.[2]

In Anglican and Episcopal traditions, Jophiel is recognized as an archangel. She is often depicted in iconography holding a flaming sword,[note 1] such as the stained glasses at St Michael's Church in Brighton, St Peter and St John's Church in Kirkley,[7] Holy Trinity Church in Coventry[8] and a mural at St. John's Episcopal Church in Memphis, Tennessee.[9]

Jophiel is an Archangel of the Kabbalah (though some systems put Raziel in her place) and in several listings including that of the early medieval theologian Pseudo-Dionysus.[10] The Calendarium Naturale Magicum Perpetuum lists Jophiel as the angel of the Sephira Chokhmah,[11] as do the Key of Solomon variant "The Veritable Clavicles of Solomon,"[12] and the Sixth and Seventh Books of Moses,[13] both latter works derived from the Calendarium.[14] Agrippa attributes Jophiel to Saturn, while Paracelsus assigns her to Jupiter.[2] Rudd attributes the Zodiac to Jophiel[15] along with the Sephira Binah instead of Zaphkiel.[16] Athanasius Kircher names Jophiel as Angelus pulchritudinis, "angel of beauty".[17] According to Robert Ambelain, Jophiel is in charge of the Cherubim, particularly the Shemhamphorasch angels Haziel, Aladiah, Lauviah, Hahaiah, Iezalel, Mehahel, Hariel, and Hakamiah.[18]

Angels of Love and Light describes her as "the Archangel of Paradise and the Patron of Artists and Illumination. She teaches the outer consciousness the Power of Light within oneself. She is also described as "the Yellow Ray of Wisdom, Illumination, and Constancy", and lists her Archeia as Christine also says

He Stirs feelings through Radiation of Illumination and into aspiration for spiritual things. He helps in absorbing information, studying for and passing tests, dissolution of ignorance, pride, and narrow-mindedness, and exposure of wrongdoing in governments and corporations. Jophiel helps in fighting pollution, cleaning up our planet and brings to mankind the gift of Beauty. He also provides inspiration for artistic and intellectual thought providing help with artistic projects and to see the beautiful things around us.

John Milton, in his poem Paradise Lost, mentions that Zophiel is "of cherubim the swiftest wing" (Paradise Lost VI, 535).

Zophiel is the subject of a poem by Maria Gowen Brooks.