From Wikipedia, the free encyclopedia
Jump to navigation Jump to search
Place mentioned in the Bible, the abode of Cain
For other uses, see Land of Nod (disambiguation). 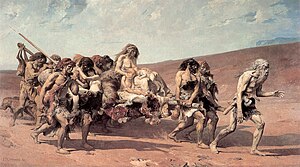 The Land of Nod (Hebrew: אֶרֶץ־נוֹד – ʾereṣ-Nōḏ) is a place mentioned in the Book of Genesis of the Hebrew Bible, located "on the east of Eden" (qiḏmaṯ-ʿḖḏen), where Cain was exiled by God after Cain had murdered his brother Abel. According to Genesis 4:16:

Genesis 4:17 relates that after arriving in the Land of Nod, Cain's wife bore him a son, Enoch, in whose name he built the first city.

"Nod" (נוד) is the Hebrew root of the verb "to wander" (לנדוד). Therefore, to dwell in the land of Nod can mean to live a wandering life.[2] Gesenius defines (נוּד) as follows:

Much as Cain's name is connected to the verb meaning "to get" in Genesis 4:1, the name "Nod" closely resembles the word "nad" (נָד), usually translated as "vagabond", in Genesis 4:12. (In the Septuagint's rendering of the same verse God curses Cain to τρέμων, "trembling".)[4]

A Greek version of Nod written as Ναίν appearing in the Onomastica Vaticana possibly derives from the plural נחים, which relates to resting and sleeping. This derivation, coincidentally or not, connects with the English pun on "nod".[5]

Josephus wrote in Antiquities of the Jews (c. AD 93) that Cain continued his wickedness in Nod: resorting to violence and robbery; establishing weights and measures; transforming human culture from innocence into craftiness and deceit; establishing property lines; and building a fortified city.[6][7]

Nod is said to be outside of the presence or face of God. Origen defined Nod as the land of trembling and wrote that it symbolized the condition of all who forsake God.[8] Early commentators treated it as the opposite of Eden (worse still than the land of exile for the rest of humanity). In the English tradition Nod was sometimes described as a desert inhabited only by ferocious beasts or monsters. Others interpreted Nod as dark or even underground—away from the face of God.[9]

Augustine described unconverted Jews as dwellers in the land of Nod, which he defined as commotion and "carnal disquietude".[10]

Gateway to Land of Nod in Headley Down, Hampshire, UK

The name "Land of Nod" was accorded locally to the northerly 3,000 acres of the Great Plot lying north of Woburn, Massachusetts at its foundation in 1640-42, "the name being probably suggested by a comparison of its forlorn condition — so far remote from church ordinances — with the Nod to which Cain wandered when he went 'from the presence of the Lord'." Its Native American name was Nena Saawaattawattocks.[12]

The Land of Nod can refer to the mythical land of sleep, a pun on Land of Nod (Gen. 4:16). To "go off to the land of Nod" plays with the phrase to "nod off", meaning to go to sleep.[14][5] The first recorded use of the phrase to mean "sleep" comes from Jonathan Swift in his Complete Collection of Polite and Ingenious Conversation (1737)[15] and Gulliver's Travels. A later instance of this usage appears in the poem "The Land of Nod" by Robert Louis Stevenson from the A Child's Garden of Verses (1885) collection.[16]

One of American writer John Steinbeck's most famous novels is East of Eden. The betrayal of a brother is one of its central themes.[17]