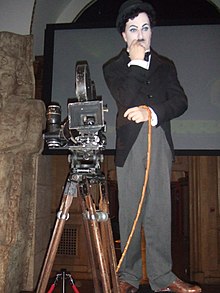 A mannequin of Charlie Chaplin at the London Film Museum

The London Film Museum, founded and created by Jonathan Sands in February 2008, is a museum dedicated to the British film industry. It was previously known as The Movieum of London and was originally situated in County Hall,[1] but moved to a Covent Garden location in April 2012.[2]

It exhibits original props, costumes and sets from feature films. There is also a section on how films are made, including information on all the major studios. Original pieces include costumes and props from British films, 'Little Nellie' from You Only Live Twice, an original Superman meteor, the Rank Organisation gong used in their opening titles, and armour made by Terry English. There is also a corridor explaining how films are made with the chance to talk to those involved.

Two previous special exhibitions have been:

Since March 2014,[4] the Museum has been dedicated to the Bond in Motion - The Largest Official Collection of James Bond Vehicles exhibition. This features cars, other vehicles and original props[5] from the film series.