Plain dress is a practice among some religious groups, primarily some Christian churches in which people dress in clothes of traditional modest design, sturdy fabric, and conservative cut. It is intended to show acceptance of traditional gender roles, modesty, readiness to work and serve, and to preserve communal identity and separation from the immodest, ever-changing fashions of the world.

Among the Amish and other plain groups, plain dress is not considered to be a costume but instead is an expression of their religious philosophy.[4] Plain, simple and serviceable gender-identifying dress is governed by an unwritten code of conduct, called "ordnung" among Anabaptists, which is strictly adhered to by Amish, Old Order Mennonites, and conservative Brethren.[5]

Historically, Methodists were known for wearing plain dress, a tradition carried on by a few members in the conservative holiness movement, such as communicants of the Allegheny Wesleyan Methodist Connection and Evangelical Wesleyan Church,[7][8] as well as some Pentecostal denominations in the Wesleyan-Arminian tradition.[6]

Traditional Adventists wear plain dress as taught by the founder of that faith Ellen White, who asked that they "adopt a simple, unadorned dress of modest length".[10] Adherents of the Seventh-day Adventist Church have historically not worn wedding rings.[11]

Other groups adhering to a conservative dress code include Buddhist and Christian monks, Orthodox Jews, and Muslim women, but these forms of dress normally are not called "plain dress".

Plain dress is attributed to reasons of theology and sociology.[3] In general, plain dress involves the covering of much of the body (often including the head, forearms and calves), with minimal ornamentation, rejecting print fabrics, trims, fasteners, and jewelry. Non-essential elements of garments such as neckties, collars, and lapels may be minimized or omitted. Practical garments such as aprons and shawls may be layered over the basic ensemble. Plain dress garments are often handmade and may be produced by groups of women in the community for efficiency and to ensure uniformity of style. Plain dress practices can extend to the grooming of hair and beards and may vary somewhat to allow children and older people more latitude.[12]

Within these general practices, distinctions abound. In some groups, for example, the women's preferred head covering is lacy or translucent; in others, it must be opaque.

The traditional plain dress worn by the Anabaptists and other religious groups has long sleeves with a set waist, long skirt, and no adornment. It denotes "utility, modesty, long wear and inconspicuousness", does not display any trademark, and is not dictated by fashion trends. Shawl, aprons, bonnets and cap are part of plain dress.[13]

As a part of their testimony of simplicity, Quakers (Religious Society of Friends) traditionally wore plain dress; "Ruffles and lace and other forms of ornamentation, as well as unnecessary cuffs and collars and lapels and buttons, were forbidden."[15][16] George Fox implored fellow Quakers to wear plain dress:[17]

Friends, keep out of the vain fashions of the world; let not your eyes, minds, and spirits run after every fashion (in attire) of the nations; for that will lead you from the solid life into unity with that spirit that leads to follow the fashions of the nations, after every fashion of apparel that gets up: but mind that which is sober and modest, and keep to your plain fashions, that you may judge the world's vanity and spirit, in its vain fashions, and show a constant spirit in the truth and plainness.[17]

This classical Quaker belief practice continues to be maintained by Conservative Friends, as well as the Central Yearly Meeting of Friends.[15][1] 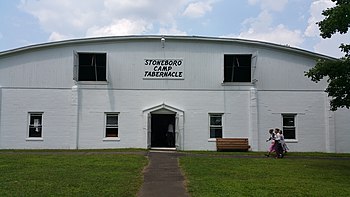 Early Methodists wore plain dress, with Methodist clergy condemning "high headdresses, ruffles, laces, gold, and 'costly apparel' in general".[8] John Wesley, the founder of the Methodist movement, recommended that Methodists read his thoughts On Dress, in which he detailed acceptable types and colors of fabrics, in addition to "shapes and sizes of hats, coats, sleeves, and hairstyles";[18] in that sermon, John Wesley expressed his desire for Methodists: "Let me see, before I die, a Methodist congregation, full as plain dressed as a Quaker congregation."[19] He also taught, with respect to Christian headcovering, that women, "especially in a religious assembly", should "keep on her veil".[20][21] Those who tried to attend Methodist services in costly apparel were denied admittance.[22] Wesley's teaching was based on his interpretation of 1 Timothy 2:9-10 and 1 Peter 3:3-4, which he stated led him to conclude that "expensive clothes puff up their wearers, promote vanity, incite anger, inflame lust, retard the pursuit of holiness, and steal from God and the poor."[23] The 1858 Discipline of the Wesleyan Methodist Connection stated that "we would not only ejoin on all who fear God plain dress, but we would recommend to our preachers and people, according to Mr. Wesley's views expressed in his sermon on the inefficiency of Christianity, published but a few years before his death, and containing his matured judgment, distinguishing plainness—Plainness which will publicly comment them to the maintenance of their Christian profession wherever they may be."[24] The 1859 novel Adam Bede portrayed the Methodist itinerant preacher, Dinah Morris, wearing plain dress, with the words "I saw she was a Methodist, or Quaker, or something of that sort, by her dress".[25] Peter Cartwright, a Methodist revivalist, lamented the decline of wearing plain dress among Methodists, stating:[26]

The Methodists in that early day dressed plain; attended their meetings faithfully, especially preaching, prayer and class meetings; they wore no jewelry, no ruffles; they would frequently walk three or four miles to class-meetings and home again, on Sundays; they would go thirty or forty miles to their quarterly meetings, and think it a glorious priviledge to meet their presiding elder, and the rest of the preachers. They could, nearly every soul of them, sing our hymns and spiritual songs. They religiously kept the Sabbath day: many of them abstained from dram-drinking, not because the temperance reformation was ever heard of in that day, but because it was interdicted in the General Rules of our Discipline. The Methodists of that day stood up and faced their preacher when they sung; they kneedled down in the public congregation as well as elsewhere, when the preacher said, "Let us pray." There was no standing among the members in time of prayer, especially the abominable practice of sitting down during that exercise was unknown among early Methodists. Parents did not allow their children to go to balls or plays; tey did not send them to dancing schools; they generally fasted once a week, and almost universally on Friday before each quarterly meeting. If the Methodists had dressed in the same "superfluity of naughtiness" then as they do now, there were very few even out of the Church that would have had any confidence in their religion. But O, how have things changed for the worse in this educational age of the world![24]

While few wear plain dress in mainline Methodism today, some Methodist Churches of the conservative holiness movement, such as the Allegheny Wesleyan Methodist Connection and Evangelical Wesleyan Church, continue to dress plainly,[7][27] also avoiding the wearing of jewelry (inclusive of wedding rings).[28]

Their strait, unlapelled, dark brown coat, the broad-brimmed, low-crowned hat, the knee-buckled small clothes, the broad, round-toed shoe, were consistent characteristics of a Moravian brother; whilst the plain drab or black silk bonnet, the three-corned white kerchief, the plain silk gown (Sunday dress), the comfortable hood-finished cloack, the "stuff" shoe, for comfort and convenience, were the sisters' concession to St. Peter's advice, "whose adorning, let it not be that outward adorning of plaiting the hair, and wearing of gold, or putting on of apparel."[9]

Plain dressing Christians cite Paul's advice to the Romans, "Be not conformed to this world," as one Biblical basis for their distinctive dress. Other scripture passages counsel women to wear head coverings while praying (1 Corinthians 11:5), not to cut their hair (1 Corinthians 11:14-15), and for men not to shave or cut their beards (Leviticus 19:27).[29]

The rejection of extravagant clothing is further established in 1 Timothy 2:9-10[30][31]

[T]hat women adorn themselves in modest apparel, with shamefacedness and sobriety; not with broided hair, or gold, or pearls, or costly array; but (which becometh women professing godliness) with good works.

Plain dress may establish a sense of belonging within the community while also marking the group's members as different in the wider society. Some practitioners describe their dress as a protection from unwanted attention. Quaker minister Elizabeth Fry considered her plain dress to serve as "a hedge against the world", and "a sort of protector".[32] Marketing through the internet has these sites which propagate plain dress: "Quaker Jane", "Plain and Simple Headcoverings", "Rachel’s Seamstress Services" and "Mennonite Maidens".[3]

Simple dress, considered "sensible and useful" and necessary, is sometimes hard to find as the clothing market is dictated by fashion conscious people who consider plain dress dull.[33]

Dressing heroines in Victorian literature in plain dress is often assumed to be a way of making characters appear classless and sexless.[34] Others argue that authors like Charlotte Brontë, George Eliot, and Anthony Trollope use plain dress to highlight the marriageability of the character, sexualizing her by emphasizing the female body within.[34][35] Additionally, plain dress may signify a character's rejection of societal norms and willingness to leave the household to act on her desires.[34]