From Wikipedia, the free encyclopedia
Jump to navigation Jump to search
13th-century Norse work of literature

The Prose Edda, also known as the Younger Edda, Snorri's Edda (Icelandic: Snorra Edda) or, historically, simply as Edda, is an Old Norse work of literature written in Iceland during the early 13th century. The work is often assumed to have been written, or at least compiled, by the Icelandic scholar, lawspeaker, and historian Snorri Sturluson c. 1220. It is considered the fullest and most detailed source for modern knowledge of Norse mythology.

It begins with a Christian Prologue laying out the creation of the world and the human race and the rise of paganism after the great flood,[1] and a section on the Norse cosmogony, pantheon, and myths.[2] This is followed by three distinct books: Gylfaginning (consisting of approximately 20,000 words), Skáldskaparmál (approximately 50,000 words), and Háttatal (approximately 20,000 words). Seven manuscripts, dating from c. 1300 to 1600, have independent textual value. Snorri planned the collection as a textbook. It was to enable Icelandic poets and readers to understand the subtleties of alliterative verse, and to grasp the meaning behind the many kenningar (compounds) that were used in skaldic poetry.

The Prose Edda was originally referred to as simply Edda, but was later titled the Prose Edda in modern collections to distinguish it from the collections titled Poetic Edda that are largely based on Codex Regius, a collection of poetry composed after Edda in 13th century Iceland.[3] At that time, versions of the Edda were well known in Iceland, but scholars speculated that there once was an Elder Edda which contained the poems which Snorri quotes in his Edda.

The etymology of "Edda" remains uncertain; there are many hypotheses, but little agreement. Some argue that the word derives from the name of Oddi, a town in the south of Iceland where Snorri was raised. Edda could therefore mean "book of Oddi." However, this assumption is generally rejected. Faulkes in his English translation of the Prose Edda commented that this is "unlikely, both in terms of linguistics and history"[4] since Snorri was no longer living at Oddi when he composed his work.

Another connection was made with the word "óðr", which means "poetry or inspiration" in Old Norse.[4] According to Faulkes, though such a connection is plausible semantically, it is unlikely that "Edda" could have been coined in the 13th century on the basis of "óðr", because such a development "would have had to have taken place gradually", and "Edda" in the sense of "poetics" is not likely to have existed in the preliterary period.[5]

Edda also means "great-grandparent", a word used by Snorri himself in the Skáldskaparmál. That is, with the same meaning, the name of a character in the Rigsthula and other medieval texts. This hypothesis has attracted François-Xavier Dillmann, author of a French translation of the Edda, who said "it seems likely that this person's name was chosen as the title of the work due to the fact that it was a collection of ancient knowledge"[6] or, in the words of Régis Boyer, the "grandparent of all sacred knowledge".[7]

A final hypothesis is derived from the Latin "edo", meaning "I write". It relies on the fact that the word "kredda" (meaning "belief") is certified and comes from the Latin "credo", "I believe." It seems likely Snorri would have been able to invent the word. Edda in this case could be translated as "Poetic Art". This is the meaning that the word was then given in the Middle Ages.[4]

The name Sæmundar Edda was given by the Bishop Brynjólfur Sveinsson to the collection of poems contained in the Codex Regius, many of which are quoted by Snorri. Brynjólfur, along with many others of his time incorrectly believed that they were collected by Sæmundr fróði[8] (therefore before the drafting of the Edda of Snorri), and so the Poetic Edda is also known as the Elder Edda. 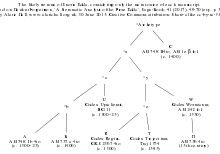 The likely stemma of Snorra Edda, considering only the main source of each manuscript.[9]

Seven manuscripts of the Edda have survived: six copies from the Middle Ages and another dating to the 1600s. No one manuscript is complete, and each has variations. In addition to three fragments, the four main manuscripts are Codex Regius, Codex Wormianus, Codex Trajectinus, and the Codex Upsaliensis.[10]

Although some scholars have doubted whether a sound stemma of the manuscripts can be created, due to the possibility of scribes drawing on multiple exemplars or from memory, recent work has found that the main sources of each manuscript can be fairly readily ascertained.[12]

The Edda remained fairly unknown outside of Iceland until the publication of the Edda Islandorum in 1665.[13]

The assumption that Snorri Sturluson is responsible for writing the Edda is largely based on the following paragraph from a portion of Codex Upsaliensis, an early 14th-century manuscript containing the Edda:

This book is called Edda. Snorri Sturluson compiled it in the way that it is arranged here. First it tells about the Æsir and Ymir, then comes the poetic diction section with the poetic names of many things and lastly a poem called the List of Meters which Snorri composed about King Hakon and Duke Skuli.[14]

The Prologue is the first section of four books of the Edda, consisting of an euhemerized Christian account of the origins of Nordic mythology: the Nordic gods are described as human Trojan warriors who left Troy after the fall of that city (an origin similar to the one chosen by Geoffrey of Monmouth in the 12th century to account for the ancestry of the British nation, and which parallels Virgil's Aeneid). According to Edda, these warriors settled in northern Europe, where they were accepted as divine kings because of their superior culture and technology. Remembrance ceremonies later conducted at their burial sites degenerated into heathen cults, turning them into gods. Alexander M. Bruce suggested that Sturlson was in possession of the Langfeðgatal or a closely related text when he composed the detailed list of gods and heroes given. He noted parallel sequences in the Langfeðgatal and the Edda, noting the second appearance of a "Scyld figure" as both an ancestor and a descendant of Odin in both. This figure is expanded upon in the Edda detailing Skjöldr as Odin's son after his migration northwards to Reidgothland and his ordination as a King of Denmark.[16] 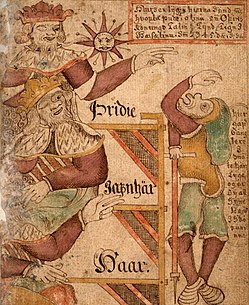 Gylfaginning (Old Icelandic "the tricking of Gylfi")[17] follows the Prologue in Edda. Gylfaginning deals with the creation and destruction of the world of the Nordic gods, and many other aspects of Norse mythology. The section is written in prose interspersed with quotes from skaldic poetry.

Thjazi and Loki. Beginning of the myth of the abduction of Idun, reported by Skáldskaparmál. Manuscript NKS 1867 4to (Iceland, 1760), Copenhagen, Royal Library
Main article: Skáldskaparmál

Skáldskaparmál (Old Icelandic "the language of poetry"[18]) is the third section of Edda, and consists of a dialogue between Ægir, a god associated with the sea, and Bragi, a skaldic god, in which both Nordic mythology and discourse on the nature of poetry are intertwined. The origin of a number of kenningar are given and Bragi then delivers a systematic list of kenningar for various people, places, and things. Bragi then goes on to discuss poetic language in some detail, in particular heiti, the concept of poetical words which are non-periphrastic, for example "steed" for "horse", and again systematises these.

Háttatal (Old Icelandic "list of verse-forms"[19]) is the last section of Edda. The section is composed by the Icelandic poet, politician, and historian Snorri Sturluson. Primarily using his own compositions, it exemplifies the types of verse forms used in Old Norse poetry. Snorri took a prescriptive as well as descriptive approach; he has systematized the material, often noting that the older poets did not always follow his rules.