"Son of man", "son of Adam", or "like a man", are phrases used in the Hebrew Bible, various apocalyptic works of the intertestamental period, and in the Greek New Testament. In the indefinite form ("son of Adam", "son of man", "like a man") used in the Hebrew Bible it is a form of address, or it contrasts human beings against God and the angels, or contrasts foreign nations (like Persia and Babylon), which are often represented as animals in apocalyptic writings (bear, goat, or ram), with Israel which is represented as human (a "son of man"), or it signifies an eschatological human figure (the Jewish King Messiah).

The Hebrew expression "son of man" (בן–אדם, ben-'adam) appears 107 times in the Hebrew Bible, the majority (93 times) in the Book of Ezekiel.[1] It is used in three main ways: as a form of address (Ezekiel); to contrast the lowly status of humanity against the permanence and exalted dignity of God and the angels (Numbers 23:19, Psalm 8:4); and as a future eschatological figure whose coming will signal the end of history and the time of God's judgement (Daniel 7:13-14).[2]

Daniel 7 tells of a vision given to Daniel in which four "beasts," representing pagan nations, oppress the people of Israel until judged by God. Daniel 7:13-14 describes how the "Ancient of Days" (God) gives dominion over the earth to "one like a man (כבר אנש [kibar 'anash]). The passage in Daniel 7:13 occurs in Biblical Aramaic.

Rashi explains: ″13 "one like a man was coming": That is the King Messiah. -- "and… up to the Ancient of Days": Who was sitting in judgment and judging the nations. -- "came": arrived, reached. 14 "And He gave him dominion": And to that man He gave dominion over the nations, for the heathens he likens to beasts, and Israel he likens to a man because they are humble and innocent. -- "which will not be removed": [as translated,] will not be removed.″

Later in chapter 7 it is explained that "one like a man" certainly implicates a "human being" and also stands for "the saints of the Most High" (7:18, 21-22) and "the people of the saints of the Most High" (7:27).[3] The "saints" and "people of the saints" in turn probably stand for the people of Israel – the author is expressing the hope that God will take dominion over the world away from the beast-like pagan "nations" and give it to human-like Israel.[3] 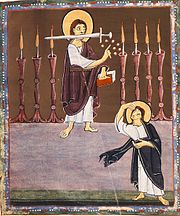 "One like a son of man" with a sword among the seven lampstands, in John's vision, from the Bamberg Apocalypse, 11th century.
Main article: Son of man (Christianity)

Countering Rashi is the suggestion that Daniel 7:13 "like a son of man" probably did not stand for the Messiah, but that this interpretation stems from occurrences of the phrase in extant versions of later apocryphal and deuterocanonical works such as the Similitudes of Enoch and 4 Ezra.[3] Whether these messianic "Son of Man" references are genuinely Jewish or the result of Christian interpolation is disputed.[4] An example of a disputed section is that of The Similitudes (1 Enoch 37-71) which uses Daniel 7 to produce an unparalleled messianic Son of Man, pre-existent and hidden yet ultimately revealed, functioning as judge, vindicator of righteousness, and universal ruler.[5] The Enochic messianic figure is an individual representing a group, (the Righteous One who represents the righteous, the Elect One representing the elect), but in 4 Ezra 13 (also called 2 Esdras) he becomes an individual man.[6][7][8]

The New Testament features the indefinite "a son of man" in Hebrews 2:6 (citing Psalm 8:4), and "one like a son of man" in Revelation 1:13, 14:14 (referencing Daniel 7:13's "one like a son of man").[9] The four gospels introduce a new definite form, "ὁ υἱὸς τοῦ ἀνθρώπου", literally "the son of the man." It is an awkward and ambiguous expression in Greek.[1] In all four it is used only by Jesus (except once in the Gospel of John, when the crowd asks what Jesus means by it), and functions as an emphatic equivalent of the first-person pronoun, I/me/my.[10] German theologian Rudolf Bultmann sees the phrase not as one genuinely used by Jesus but as one inserted by the early Church.[11] More recently, theologian C. F. D. Moule argues that the phrase 'the Son of Man', "so far from being a title evolved from current apocalyptic thought by the early Church and put by it onto the lips of Jesus, is among the most important symbols used by Jesus himself to describe his vocation and that of those whom he summoned to be with him."[12]

The exact translation of "son of man" varies —depending on the source used.