From Wikipedia, the free encyclopedia
Jump to navigation Jump to search
"Ocean Sea" redirects here. For the novel, see Ocean Sea (novel).
Not to be confused with Ocean World, Ocean, or Sea.
The interconnected system of Earth's oceanic waters

Animated map exhibiting the world's oceanic waters. A continuous body of water encircling Earth, the World Ocean is divided into a number of principal areas with relatively uninhibited interchange among them. Five oceanic divisions are usually defined: Pacific, Atlantic, Indian, Arctic, and Southern; the last two listed are sometimes consolidated into the first three. 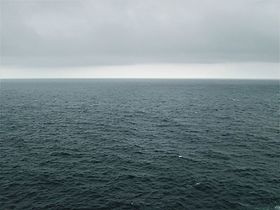 The Atlantic, one component of the system, makes up 23% of the "global ocean".

The unity and continuity of the World Ocean, with relatively free interchange among its parts, is of fundamental importance to oceanography.[2] It is divided into a number of principal oceanic areas that are delimited by the continents and various oceanographic features: these divisions are the Atlantic Ocean, Arctic Ocean (sometimes considered an estuary of the Atlantic), Indian Ocean, Pacific Ocean, and Southern Ocean, defined by the International Hydrographic Organization (IHO) in 2000, based on evidence that this region of the World Ocean has a distinct ecosystem and a unique impact on global climate.[3] In turn, oceanic waters are interspersed by many smaller seas, gulfs, and bays.

A global ocean has existed in one form or another on Earth for eons, and the notion dates back to classical antiquity in the form of Oceanus. The contemporary concept of the World Ocean was coined in the early 20th century by the Russian oceanographer Yuly Shokalsky to refer to the continuous ocean that covers and encircles most of Earth.[4]

If viewed from the southern pole of Earth, the Atlantic, Indian, and Pacific Oceans can be seen as lobes extending northward from the Southern Ocean. Farther north, the Atlantic opens into the Arctic Ocean, which is connected to the Pacific by the Bering Strait, forming a continuous expanse of water.