Yucatec Maya (/ˈjuːkəˌtɛk ˈmaɪə/; Yucatec Maya: mayab tʼàan [majaɓˈtʼàːn], mayaʼ tʼàan [majaʔˈtʼàːn], maayaʼ tʼàan [màːjaʔ tʼàːn], literally "flat speech"[4]), is a Mayan language spoken in the Yucatán Peninsula and northern Belize. Native speakers do not qualify it as Yucatec, calling it literally "flat/Maya speech" in their language and simply (el) maya when speaking Spanish, but it is linguists who add Yucatec to the name to clearly distinguish it from the rest of Mayan languages (such as Kʼicheʼ and Itzaʼ). Thus the use of the term Yucatec Maya to refer to the language is scientific jargon or nomenclature.[5]

In the Mexican states of Yucatán, some parts of Campeche, Tabasco, Chiapas, and Quintana Roo, Yucatec Maya remains the mother tongue of a large segment of the population today, with around 800,000 speakers. There are perhaps about 6,000 speakers in Belize. 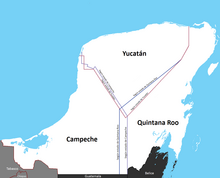 Yucatec Maya forms part of the Yucatecan branch of the Mayan language family. The Yucatecan branch divides into the subgroups Mopan-itza and Yucatec-Lacandon, which in turn split into four languages: Itza, Mopan, Yucatec Maya, and Lacandon. All the languages in the Mayan language family are thought to originate from an ancestral language that was spoken some 5,000 years ago, known as Proto-Mayan.[6]

Christopher Columbus traded with Maya merchants off the coast of Yucatán in 1502, but never made landfall. Arriving in Yucatán during the decade following Columbus's first contact with the Maya, the first Spanish to set foot on Yucatán soil did so by chance, the survivors of a shipwreck in the Caribbean. Most of the shipwrecked men were sacrificed, leaving just two survivors. In 1519, one of these men (Gerónimo de Aguilar) accompanied Hernán Cortez to the Yucatán island of Cozumel, also taking part in the conquest of central Mexico. The other survivor (Gonzalo Guerrero) became a Mexican legend as father of the first Mestizo: by Aguilar's account, Guerrero "went native"- he married native women, wore traditional native apparel, and even fought against the Spanish.[7] Francisco de Montejo's military incursion of Yucatán took three generations and three wars of heavy fighting that lasted a total of 24 years.The Maya had been in a stable decline when Spanish conquistadors arrived in 1517 AD. From 200 to 800 AD the Maya were thriving and making great technological advances and created a system for recording numerals and hieroglyphs that was more complex and efficient than what had come before. They migrated Northward and Eastward to the Yucatán peninsula from Palenque, Jaina, and Bonampak. In the 12th and 13th centuries, a coalition emerged in the Yucatán peninsula between three important centers, Uxmal, Chichen Uitza, and Mayapan, where they were able to grow and practice intellectual and artistic achievement during a period of peace, but then war broke out and both intellectual and artistic achievements came to end. By the 15th century Mayan Toltec fell. In the 18th century the Spanish turned the lands to large maize and cattle plantations with luxurious haciendas and exported natural resources.[8] The Maya were subjects of the Spanish Empire from 1542 to 1821. 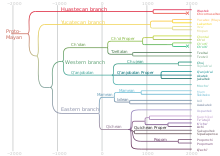 During the colonization of the Yucatán peninsula, the Spanish believed that in order to evangelize and govern the Maya they needed to reform Yucatec Maya and shape it to serve their ends of religious conversion and social control.[9] Spanish missionaries undertook a project of linguistic and social transformation known as reducción (from Spanish reducir), a term not widely recognized by historians. The linguistic aspect of this process involved the reformulation of Yucatec Maya, primarily through the translation of religious texts from Spanish into Yucatec Maya and the creation of neologisms needed to express Catholic religious concepts. The result of the process of reducción was Maya reducido, a semantically transformed version of Yucatec Maya. Along with the attempted eradication of all Maya religious practices and associated written works, the missionaries thus shaped a language that was used to convert, subjugate, and govern the Maya population of the Yucatán peninsula. Notwithstanding, Maya reducido was appropriated by its Maya speakers for their own purposes and served efforts to resist colonial domination. The oldest written records in Maya reducido (which used the Roman alphabet) were written by Maya notaries between 1557 and 1851. These works can be found in the United States, Mexico, and Spain in libraries and archives[7]

A characteristic feature of Yucatec Maya, like other Mayan languages, is the use of ejective consonants: /pʼ/, /tʼ/, /kʼ/. Often referred to as glottalized consonants, they are produced at the same place of oral articulation as their non-ejective stop counterparts: /p/, /t/, /k/. However, the release of the lingual closure is preceded by a raising of the closed glottis to increase the air pressure in the space between the glottis and the point of closure, resulting in a release with a characteristic popping sound. The sounds are written using an apostrophe after the letter to distinguish them from the plain consonants (tʼàan "speech" vs. táan "forehead"). The apostrophes indicating the sounds were not common in written Maya until the 20th century but are now becoming more common. The Mayan b is also glottalized, an implosive /ɓ/, and is sometimes written bʼ, but that is becoming less common.

Yucatec Maya is one of only three Mayan languages to have developed tone, the others being Uspantek and one dialect of Tzotzil. Yucatec distinguishes short vowels and long vowels, indicated by single versus double letters (ii ee aa oo uu), and between high- and low-tone long vowels. High-tone vowels begin on a high pitch and fall in phrase-final position but rise elsewhere, sometimes without much vowel length. It is indicated in writing by an acute accent (íi ée áa óo úu). Low-tone vowels begin on a low pitch and are sustained in length; they are sometimes indicated in writing by a grave accent (ìi èe àa òo ùu).

Also, Yucatec has contrastive laryngealization (creaky voice) on long vowels, sometimes realized by means of a full intervocalic glottal stop and written as a long vowel with an apostrophe in the middle, as in the plural suffix -oʼob.

† the letter w may represent the sounds [w] or [v]. The sounds are interchangeable in Yucatec Mayan although /w/ is considered the proper sound.

Some sources describe the plain consonants as aspirated, but Victoria Bricker states "[s]tops that are not glottalized are articulated with lung air without aspiration as in English spill, skill, still."[10]

In terms of vowel quality, Yucatec Maya has a straight-forward five vowel system:

For each of these five vowel qualities, the language contrasts four distinct vowel "shapes", i.e. combinations of vowel length, tone, and phonation. In the standard orthography first adopted in 1984,[11] vowel length is indicated by digraphs (e.g. "aa" for IPA [aː]).

In fast-paced speech, the glottalized long vowels may be pronounced the same as the plain long high vowels, so in such contexts ka’an [ká̰ːn] 'sky' sounds the same as káan [káːn] 'when?'.

Mayan words are typically stressed on the earliest syllable with a long vowel. If there is no long vowel, then the last syllable is stressed. Borrowings from other languages such as Spanish or Nahuatl are often stressed as in the original languages.

An important morphophonological process in Yucatec Maya is the dissimilation of identical consonants next to each other by debuccalizing to avoid geminate consonants. If a word ends in one of the glottalized plosives /pʼ tʼ kʼ ɓ/ and is followed by an identical consonant, the final consonant may dispose of its point of articulation and become the glottal stop /ʔ/. This may also happen before another plosive inside a common idiomatic phrase or compound word. Examples: [mayaɓˈtʼàːn] ~ [majaʔˈtʼàːn] 'Yucatec Maya' (literally, "flat speech"), and náak’- [náːkʼ-] (a prefix meaning 'nearby') + káan [ká̰ːn] 'sky' gives [ˈnáːʔká̰ːn] 'palate, roof the mouth' (so literally "nearby-sky").

This change in the final consonant is often reflected in orthographies, so [majaʔˈtʼàːn] can appear as maya’ t’àan, maya t'aan, etc.

Phonology acquisition is received idiosyncratically. If a child seems to have severe difficulties with affricates and sibilants, another might have no difficulties with them while having significant problems with sensitivity to semantic content, unlike the former child.[12]

There seems to be no incremental development in phonology patterns. Monolingual children learning the language have shown acquisition of aspiration and deobstruentization but difficulty with sibilants and affricates, and other children show the reverse. Also, some children have been observed fronting palatoalveolars, others retract lamino-alveolars, and still others retract both.[12]

Glottalization was not found to be any more difficult than aspiration. That is significant with the Yucatec Mayan use of ejectives. Glottal constriction is high in the developmental hierarchy, and features like [fricative], [apical], or [fortis] are found to be later acquired.[13]

Like almost all Mayan languages, Yucatec Maya is verb-initial. Word order varies between VOS and VSO, with VOS being the most common. Many sentences may appear to be SVO, but this order is due to a topic–comment system similar to that of Japanese. One of the most widely studied areas of Yucatec is the semantics of time in the language. Yucatec, like many other languages of the world (Kalaallisut, arguably Mandarin Chinese, Guaraní and others) does not have the grammatical category of tense. Temporal information is encoded by a combination of aspect, inherent lexical aspect (aktionsart), and pragmatically governed conversational inferences. Yucatec is unusual in lacking temporal connectives such as 'before' and 'after'. Another aspect of the language is the core-argument marking strategy, which is a 'fluid S system' in the typology of Dixon (1994)[14] where intransitive subjects are encoded like agents or patients based upon a number of semantic properties as well as the perfectivity of the event.

The Maya were literate in pre-Columbian times, when the language was written using Maya script. The language itself can be traced back to proto-Yucatecan, the ancestor of modern Yucatec Maya, Itza, Lacandon and Mopan. Even further back, the language is ultimately related to all other Maya languages through proto-Mayan itself.

Yucatec Maya is now written in the Latin script. This was introduced during the Spanish Conquest of Yucatán which began in the early 16th century, and the now-antiquated conventions of Spanish orthography of that period ("Colonial orthography") were adapted to transcribe Yucatec Maya. This included the use of x for the postalveolar fricative sound (which is often written in English as sh), a sound that in Spanish has since turned into a velar fricative nowadays spelled j.

In colonial times a "reversed c" (ɔ) was often used to represent [tsʼ], which is now more usually represented with ⟨dz⟩ (and with ⟨tzʼ⟩ in the revised ALMG orthography).

Use in modern media and popular culture[edit]

The 2006 film Apocalypto, directed by Mel Gibson, was filmed entirely in Yucatec Maya. The script was translated into Maya by Hilario Chi Canul of the Maya community of Felipe Carrillo Puerto, who also worked as a language coach on the production.

In August 2012, the Mozilla Translathon 2012 event brought over 20 Yucatec Mayan speakers together in a localization effort for the Google Endangered Languages Project, the Mozilla browser, and the MediaWiki software used by Wikipedia and other Wikimedia projects.[16]

Jesús Pat Chablé is often credited with being one of the first Maya-language rappers and producers.[19]

In the 2018 video game Shadow of the Tomb Raider, the inhabitants of the game’s Paititi region speak in Yucatec Maya (while immersion mode is on).[citation needed]

The modern bible edition, the New World Translation of the Holy Scriptures was released[20] in the Maya language in 2019.[21] It's distributed without charge, both printed and online editions.

On December 4, 2019, the Congress of Yucatan unanimously approved a measure requiring the teaching of the Maya language in schools in the state.[22]

In addition to universities and private institutions in Mexico, (Yucatec) Maya is also taught at: