From Wikipedia, the free encyclopedia
Jump to navigation Jump to search
This article is about the son of Helios. For other uses, see Phaeton. For the asteroid, see 3200 Phaethon. For another mythical figure of this name, see Phaethon (son of Eos). 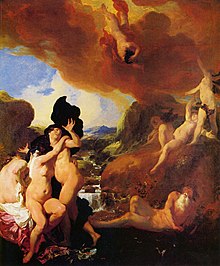 Phaethon (/ˈfeɪ.əθən/; Ancient Greek: Φαέθων, Phaéthōn, pronounced [pʰa.é.tʰɔːn]) was the son of the Oceanid Clymene and the solar deity Helios in Greek mythology. His name was also used by the Ancient Greeks as an alternative name for the planet Jupiter,[1] the motions and cycles of which were personified in poetry and myth.

Phaethon was said to be the son of the Oceanid Clymene and the solar deity Helios.[2][3] Alternatively, less common genealogies make him a son of Clymenus by Oceanid Merope,[4] of Helios and Rhodos (thus a full brother of the Heliadae)[5] or of Helios and Prote.[6]

Phaethon, challenged by Epaphus and his playmates, sought assurance from his mother that his father was the sun god Helios. She gave him the requested assurance and told him to turn to his father for confirmation. He asked his father for some proof that would demonstrate his relationship with the sun. When the god promised to grant him whatever he wanted, he insisted on being allowed to drive the sun chariot for a day.[7][8] According to some accounts Helios tried to dissuade Phaethon, telling him that even Zeus was not strong enough to steer these horses, but reluctantly kept his promise.[9] Placed in charge of the chariot, Phaethon was unable to control the horses. In some versions, the Earth first froze when the horses climbed too high, but when the chariot then scorched the Earth by swinging too near, Zeus decided to prevent disaster by striking it down with a thunderbolt.[10] Phaethon fell to earth and was killed in the process.[11]

Phaethon was the good friend or lover of Cycnus of Liguria, who profoundly mourned his death and was turned into a swan.[12] Phaethon's seven sisters, the Heliades, also mourned his loss, keeping vigil where Phaethon fell to Earth until the gods turned the sisters into poplar trees, and their tears into amber.[13]

In Plato's Timaeus, Critias tells the story of Atlantis as recounted to Solon by an Egyptian priest, who prefaced the story by saying:

"There have been, and will be again, many destructions of mankind arising out of many causes; the greatest have been brought about by the agencies of fire and water, and other lesser ones by innumerable other causes. There is a story that even you [Greeks] have preserved, that once upon a time, Phaethon, the son of Helios, having yoked the steeds in his father's chariot, because he was not able to drive them in the path of his father, burnt up all that was upon the earth, and was himself destroyed by a thunderbolt. Now, this has the form of a myth, but really signifies a declination of the bodies moving in the heavens around the earth, and a great conflagration of things upon the earth, which recurs after long intervals."[14]

In the version of the myth told by Ovid in the Metamorphoses, Phaethon ascends into heaven, the home of his suspected father. His mother Clymene had boasted that his father was the Sun-God or Phoebus. Phaethon went to his father who swore by the river Styx to give Phaethon anything he would ask for in order to prove his divine sonship. Phaethon wanted to drive the chariot of the sun for a day. Phoebus tried to talk him out of it by telling him that not even Jupiter (the king of the gods) would dare to drive it, as the chariot was fiery hot and the horses breathed out flames. He said:

"The first part of the track is steep, and one that my fresh horses at dawn can hardly climb. In mid-heaven it is highest, where to look down on earth and sea often alarms even me and makes my heart tremble with awesome fear. The last part of the track is downwards and needs sure control. Then even Tethys herself, who receives me in her submissive waves, is accustomed to fear that I might dive headlong. Moreover, the rushing sky is constantly turning, and drags along the remote stars, and whirls them in rapid orbits. I move the opposite way, and its momentum does not overcome me as it does all other things, and I ride contrary to its swift rotation. Suppose you are given the chariot. What will you do? Will you be able to counter the turning poles so that the swiftness of the skies does not carry you away? Perhaps you conceive in imagination that there are groves there and cities of the gods and temples with rich gifts. The way runs through the ambush, and apparitions of wild beasts! Even if you keep your course, and do not steer awry, you must still avoid the horns of Taurus the Bull, Sagittarius the Haemonian Archer, raging Leo and Lion's jaw, Scorpio's cruel pincers sweeping out to encircle you from one side, and Cancer's crab-claws reaching out from the other. You will not easily rule those proud horses, breathing out through mouth and nostrils the fires burning in their chests. They scarcely tolerate my control when their fierce spirits are hot, and their necks resist the reins. Beware, my boy, that I am not the source of a gift fatal to you, while something can still be done to set right your request!"[15] 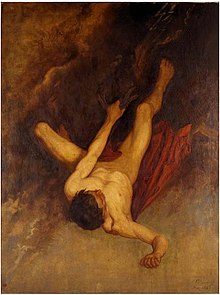 The fall of Phaethon by Adolphe Pierre Sunaert

Phaethon was adamant. When the day came, the fierce horses that drew the chariot felt that it was empty because of the lack of the sun-god's weight and went out of control. Terrified, Phaethon dropped the reins. The horses veered from their course, scorching the earth, burning the vegetation, bringing the blood of the Ethiopians to the surface of their skin and so turning it black, changing much of Africa into a desert, drying up rivers and lakes and shrinking the sea. Earth cried out to Jupiter who was forced to intervene by striking Phaethon with a lightning bolt. Like a falling star, Phaethon plunged blazing into the river Eridanos.

The epitaph on his tomb was:

Here Phaethon lies who in the sun-god's chariot fared. And though greatly he failed, more greatly he dared.[16]

Phoebus, stricken with grief at his son's death, at first refused to resume his work of driving his chariot, but at the appeal of the other gods, including Jupiter, returned to his task.

According to Clement of Alexandria in his Stromata, "...in the time of Crotopus occurred the burning of Phaethon, and the deluges of Deucalion.[17]

In The Twelve Caesars, Suetonius attributes to the emperor Tiberius the following repeated remark about the future emperor Gaius Caligula: "That to allow Gaius to live would prove the ruin of himself and of all men, and that he was raising a viper for the Roman people and a Phaethon for the world".[18] 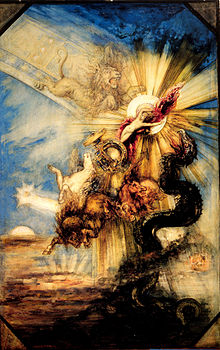 Fragments of Euripides' tragedy on this subject suggest that, in his account, Phaethon survives. In reconstructing the lost play and discussing the fragments, James Diggle has discussed the treatment of the Phaethon myth (Diggle 2004).

In the True History by the satirical Greek writer Lucian, Phaëthon is king of the sun and is at war with the moon.

The name "Phaethon", which means "Shining One",[26] was given also to Phaethon of Syria, to one of the horses of Eos (the Dawn), the Sun, the constellation Auriga, and the planet Jupiter, while as an adjective it was used to describe the sun and the moon.[27] In some accounts the planet referred to by this name is not Jupiter but Saturn.[28]

When 1 Ceres and 2 Pallas–the first asteroids–were discovered, astronomer Heinrich Olbers suggested that they were fragments of a much larger planet which was later named for Phaethon. However, the Phaeton hypothesis has been superseded by the accretion model, in which the asteroid belt represented the remainder of the protoplanetary disk that never formed a planet due to the gravity of Jupiter. However, fringe theorists still consider the Phaeton hypothesis likely.

In modern times, an asteroid whose orbit brings it close to the sun has been named "3200 Phaethon" after the mythological Phaethon.

The French form of the name "Phaethon" is "Phaéton". This form of the word is applied to a kind of carriage and automobile.[29][30]

An order, family, and genus of birds bear the name Phaethon in their taxonomic nomenclature, the tropicbirds.