From Wikipedia, the free encyclopedia
Jump to navigation Jump to search
Goddess of dawn in Roman mythology

Aurōra (Latin: [au̯ˈroːra]) is the Latin word for dawn, and the goddess of dawn in Roman mythology and Latin poetry. Like Greek Eos and Rigvedic Ushas, Aurōra continues the name of an earlier Indo-European dawn goddess, Hausos.

In Roman mythology, Aurōra renews herself every morning and flies across the sky, announcing the arrival of the Sun. Her parentage was flexible: for Ovid, she could equally be Pallantis, signifying the daughter of Pallas,[3] or the daughter of Hyperion.[4] She has two siblings, a brother (Sol, the Sun) and a sister (Luna, the Moon). Roman writers rarely imitated Hesiod and later Greek poets by naming Aurōra as the mother of the Anemoi (the Winds), who were the offspring of Astraeus, the father of the stars.

Aurōra appears most often in sexual poetry with one of her mortal lovers. A myth taken from the Greek by Roman poets tells that one of her lovers was the prince of Troy, Tithonus. Tithonus was a mortal, and would therefore age and die. Wanting to be with her lover for all eternity, Aurōra asked Jupiter to grant immortality to Tithonus. Jupiter granted her wish, but she failed to ask for eternal youth to accompany his immortality, and he became forever old. Aurōra turned him into a cicada.

Mention in literature and music[edit] 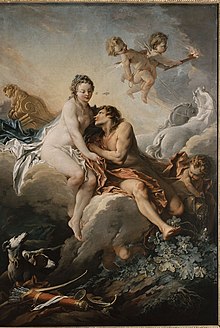 Aurōra and Cephalus, 1733, by François Boucher 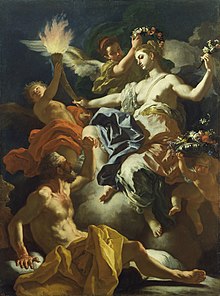 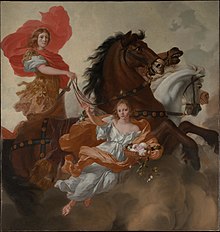 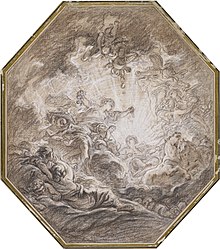 Aurōra Heralding the Arrival of the Morning Sun, c. 1765, by François Boucher

Now when Dawn in robe of saffron was hastening from the streams of Okeanos, to bring light to mortals and immortals, Thetis reached the ships with the armor that the god had given her.

But soon as early Dawn appeared, the rosy-fingered, then gathered the folk about the pyre of glorious Hector.

A Phrygian was the husband of Aurora, yet she, the goddess who appoints the last road of night, carried him away

Virgil mentions in the eighth book of his Aeneid:[5]

Aurora now had left her saffron bed, And beams of early light the heav'ns o'erspread

Saffron Aurora had brought forward her fair-weather team: the breeze offshore tells us to haul the sail-yards up.

But all so soon as the all-cheering sun
Should in the furthest east begin to draw
The shady curtains from Aurora's bed,
Away from the light steals home my heavy son...

In traditional Irish folk songs, such as "Lord Courtown":

One day I was a-musing down by the Courtown banks
The sun shone bright and clearly, bold Neptune played a prank...
There was Flora at the helm and Aurora to the stern
And all their gallant fine seamen, their course for to steer on.

In "On Imagination" by Phillis Wheatley:

From Tithon's bed now might Aurora rise,
Her cheeks all glowing with celestial dies,
While a pure stream of light o'erflows the skies.

In the poem "Tithonus" by Alfred, Lord Tennyson,[7] Aurōra is described thus:

Once more the old mysterious glimmer steals
From thy pure brows, and from thy shoulders pure,
And bosom beating with a heart renewed.
Thy cheek begins to redden through the gloom,
Thy sweet eyes brighten slowly close to mine,
Ere yet they blind the stars, and the wild team
Which love thee, yearning for thy yoke, arise,
And shake the darkness from their loosened manes,
And beat the twilight into flakes of a fire

In singer-songwriter Björk's Vespertine track, Aurōra is described as

The post-punk rock band The Sexual Side Effects's track "Aurōra" alludes to the goddess:[citation needed]

In Chapter 8 of Charlotte Brontë's Villette, Madame Beck fires her old Governess first thing in the morning and is described by the narrator, Lucy Snowe: All this, I say, was done between the moment of Madame Beck's issuing like Aurōra from her chamber, and that in which she coolly sat down to pour out her first cup of coffee.

A 20th century polish poet Zbigniew Herbert writes about Aurōra's grandchildren. In his poem they're ugly, even though they shall be beautiful."Kwestia Smaku"