From Wikipedia, the free encyclopedia
(Redirected from Hausos)
Jump to navigation Jump to search
Dawn-goddess in the Proto-Indo-European mythology 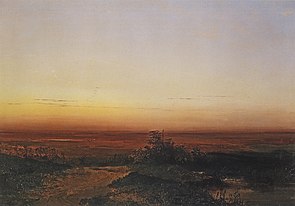 The dawn rising on the Ukrainian steppes (1852), by Alexei Kondratievich Savrasov.

Hausōs is believed to have been one of the most important deities worshipped by Proto-Indo-European speakers due to the consistency of her characterization in subsequent traditions as well as the importance of the goddess Uṣas in the Rigveda.[3][4][5]

Her attributes have not only been mixed with those of solar goddesses in some later traditions, but have subsequently expanded and influenced female deities in other mythologies.

The Dawn-goddess is sometimes portrayed as unageing and her coming as an eternal rebirth. She is ἠριγένεια ('early-born', 'born in the morning') in the Iliad, and the Rigveda describes Uṣas, the daughter of Dyáuṣ, as being born from the harnessing of the Aśvins, the divine horse twins driving the chariot of the sun.[10]

A characteristic generally given to the dawn Hausōs is her 'brilliance' and she is generally described as a 'bringer of light'.[10] Various cognates associated with the dawn-goddess indeed derive from the Proto-Indo-European root *bʰeh₂-, meaning 'to glow, shine'.[10] The Vedic Uṣas is described as bhānty Usásah ('the Dawns shine'), the Avestan Ušå as uši ... bāmya ('shining dawn') and the Greek Ēṓs as φαινόλις ('light-bringing'),[10] or λαμπρο-φαής ('light beam[ing]'),[11] attested in an Orphic hymn to the Dawn.

Hausōs is usually associated with the natural colours of the dawn: gold, saffron-yellow, red or crimson. The Dawn is 'gold-coloured' (híraṇya-varṇā) in the Rigveda, 'the golden-yellow one' (flāua) in Ovid's Amores, and 'gold-throned' (krysóthronos; χρυσόθρονος) in a Homeric formula.[12] In Latvian folk songs, Saulė and her daughter(s) are dressed of shawls woven with gold thread, and Saulė wears shoes of gold, which parallels Sappho describing Ēṓs as 'golden-sandalled' (khrysopédillos; χρυσοπέδιλλος).[12] Ēṓs is also 'saffron-robed' (κροκόπεπλος) in Homeric poems,[13] and Uṣás described as a red dawn shining from afar, and 'red, like a mare', she shoots 'ruddy beams of light', 'yokes red steeds to her car' or 'harnesses the red cows' in the Samaveda.[14] Saffron-yellow, red and purple are also colours associated with the Dawn by the Latin poet Ovid.[15] The Baltic Sun-goddess Saulė has preserved some of the imagery, and she is sometimes portrayed as waking up 'red' (sārta) or 'in a red tree' in the morning.[16][note 1]

Hausōs is also described as dancing: Uṣas throws on embroidered garments 'like a dancer' (nṛtūr iva), Ēṓs has 'dancing-places' (χοροί) around her house in the East, Saulė is portrayed dancing in her gilded shoes on a silver hill, and her fellow Baltic goddess Aušrinė is said to dance on a stone for the people on the first day of summer.[30][13]

The spread hand as the image of the sun's rays in the morning may also be of Proto-Indo-European origin.[31] The Homeric expressions 'rose-armed' (rhodópēkhus; ῥοδόπηχυς) and 'rosy-fingered Dawn' (rhododáktylos Ēṓs; ῥοδοδάκτυλος Ἠώς), as well as Bacchylides' formula 'gold-armed' (khrysopakhús; χρυσοπαχύς), can be semantically compared with the Vedic formulas 'golden-handed' (híraṇyapāṇi-; हिरण्यपाणि) and 'broad-handed' (pṛthúpāṇi-; पृथुपाणि).[31] They are also similar to Latvian poetic songs where the Sun-god's fingers are said to be 'covered with golden rings'.[31] According to Martin L. West, "the 'rose' part is probably a Greek refinement."[31]

Another common trait of the Dawn goddess is her dwelling, situated on an island in the Ocean or in an Eastern house. In Greek mythology, Ēṓs is described as living 'beyond the streams of Okeanos at the ends of the earth'.[32] In Slavic folklore, the home of the Zoryas was sometimes said to be on Bouyan (or Buyan), an oceanic island paradise where the Sun dwelt along with his attendants, the North, West and East winds.[33] The Avesta refers to a mythical eastern mountain called Ušidam- ('Dawn-house').[34] In a myth from Lithuania, a man named Joseph becomes fascinated with Aušrinė appearing in the sky and goes on a quest to find the 'second sun', who is actually a maiden that lives on an island in the sea and has the same hair as the Sun.[30] In the Baltic folklore, Saulė is said to live in a silver-gated castle at the end of the sea,[35] or to go to an island in the middle of the sea for her nocturnal rest.[36]

Opener of the doors of Heaven[edit]

Hausōs is also depicted as the opener of the doors or gates of Heaven: the Baltic verse pie Dieviņa namdurēm ('by the doors of the house of God'), which Saulė is urged to open to the horses of the Son(s) of God, is lexically comparable with the Vedic expression dvā́rau ... Diváḥ ('doors of Heaven'), which Uṣas opens with her light.[34] Another parallel could be made with the 'shining doors' (θύρας ... φαεινάς) of the home of Ēṓs, behind which she locks up her lover Tithonus as he grows old and withers in Homer's Hymn to Aphrodite.[32]

A similar poetic imagery is present among Classical poets, although some earlier Greek source may lie behind these.[37] In Ovid's Metamorphoses, Aurōra opens the red doors (purpureas fores) to fill her rosy halls,[38] and in Nonnus' Dionysiaca the Dawn-goddess shakes off her sleep and leaves Kephalos' repose in order to 'open the gates of sunrise' (ἀντολίης ὤιξε θύρας πολεμητόκος Ἠώς).[39]

Other reflexes may also be present in other Indo-European traditions. In Slavic folklore, the goddess of the dawn Zorya Utrennyaya open the palace's gates for her father Dažbog's (a Slavic Sun god) journey during the day. Her sister Zorya Vechernyaya, the goddess of dusk, closes them at the end of the day.[40][41] In a passage of the Eddas about Dellingr, a Norse deity of light, a dwarf utters a charm or incantation in front of 'Delling's doors' (fyr Dellings durum), which apparently means "at dawn".[42][43]

In Indo-European myths, Hausōs is either depicted as a reluctant bringer of light for which she is punished, or as a victim saved by her brothers the Divine Twins from a watery peril in the eastern sea.[44][45] This theme is widespread in the attested traditions: Ēṓs and Aurōra are sometimes unwilling to leave her bed, Uṣas is punished by Indra for attempting to forestall the day, and Auseklis did not always rise in the morning, as she was said to be locked up in a golden chamber or in Germany sewing velvet skirts.[3]

The Dawn is often described as driving some sort of vehicle, probably originally a wagon or a similar carrier, certainly not a chariot as the technology appeared later within the Sintashta culture (2100–1800), associated with the Indo-Iranian peoples.[46][47] In the Odyssey, Ēṓs appears once as a charioteer, with two swift horses named Lampos and Phaethon, and Bacchylides calls her 'white-horsed Dawn' (λεύκιππος Ἀώς). Uṣas yokes red oxen or cows, probably pictorial metaphors for the red clouds or rays seen at morning light.[48]

The vehicle is portrayed as a biga or a rosy-red quadriga in Virgil's Aeneid and in classical references from Greek epic poetry and vase painting,[49] a shining chariot drawn by golden-red horses.[50] Saulė, a sun-goddess syncretized with the Dawn, also drives a carriage with copper-wheels,[51] pulled by untiring horses, or a 'pretty little sleigh' (kamaņiņa) made of fish-bones.[52][53] 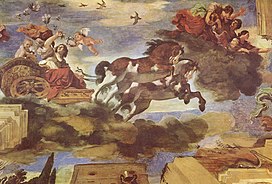 Cognates stemming from the root *h₂éwsōs and associated with a dawn-goddess are attested in the following mythologies:

The formulaic expression "Daughter of Dyēus" is attested as an epithet attached to a dawn-goddess in several poetic traditions:

The Sanskrit epithet dyotaná ("The Light Bearer") is also used once in reference to Ushas in the Rigveda.[78][79]

Other remnants of the root *h₂éwsōs are present in the Zoroastrian prayer to the dawn Hoshbām,[81] and in Ušahin gāh (the dawn watch),[82] sung between midnight and dawn.[83][84] In Persian historical and sacred literature, the personal name Aûshbâm also appears in the Chapter XXXI of the Bundahishn, translated as "the dawn".[85][better source needed]

A special carol, zorile ("dawn"), was sung by the colindători (traditional Romanian singers) during funerals, imploring the Dawns not be in a hurry to break, or begging them to prevent the dead from departing this world.[86][87] The word is of Slavic origin, with the term for 'dawn' attached to the Romanian article -le.[86]

According to linguist Václav Blažek, the Albanian word (h)yll ("star") finds a probable etymology in the root *hₐews- ('dawn'), perhaps specifically in *hₐus-li ('morning-star').[88] Scholars have also argued that the Roman ethnonym Aurēlius (Ausēlii, from Sabine *ausēla 'sun') and the Etruscan sun-god Usil, probably of Osco-Umbrian origin, may be related to the Indo-European word for the dawn.[88][62][89]

The Japanese goddess of the dawn Uzume, revered in Shintoism, was probably influenced by Vedic religion.[90] It has been suggested by anthropologist Kevin Tuite that Georgian goddess Dali also shows several parallels with Indo-European dawn-goddesses.[91]

A possible mythological descendant of the Indo-European Dawn-goddess may be Aphrodite, the Greek goddess of love and lust. Scholars posit similarities based on her connection with a sky-deity as her father (Zeus or Uranus) and her association with red and gold colors. In the Illiad, Aphrodite is hurt by a mortal and seeks solace in her mother's (Dione) bosom. Dione is seen as a female counterpart to Zeus and is thought to etymologically derive from Proto-Indo-European root *Dyeus.[92][93]