The Book of Chronicles (Hebrew: דִּבְרֵי־הַיָּמִים Diḇrê Hayyāmîm 'The Matters [of] the Days') is a Hebrew prose work constituting part of Jewish and Christian scripture. It contains a genealogy from a human being, Adam, and a narrative of the history of ancient Judah and Israel until the proclamation of King Cyrus the Great (c. 540 BC).

Chronicles is the final book of the Hebrew Bible, concluding the third section of Ketuvim, the last section of the Jewish Tanakh. It was divided into two books in the Septuagint, the Paralipoménōn (Greek: Παραλειπομένων, lit. "things left on one side").[1] In Christian contexts it is therefore known as the Books of Chronicles, after the Latin name chronikon given to the text by the scholar Jerome. In the Christian Bible, the books (commonly referred to as 1 Chronicles and 2 Chronicles, or First Chronicles and Second Chronicles) generally follow the two Books of Kings, and precede Ezra–Nehemiah; thus they conclude the history-oriented books of the Old Testament.[2] 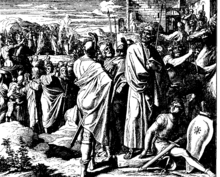 Rehoboam and Jeroboam I, 1860 woodcut by Julius Schnorr von Karolsfeld

The Chronicles narrative begins with Adam, Seth and Enosh,[3] and the story is then carried forward, almost entirely through genealogical lists, down to the founding of the first Kingdom of Israel (in the "introductory chapters", 1 Chronicles 1–9).[4] The bulk of the remainder of 1 Chronicles, after a brief account of Saul in chapter 10, is concerned with the reign of David (1 Chronicles 11–29). The next long section concerns David's son Solomon (2 Chronicles 1–9), and the final part is concerned with the Kingdom of Judah, with occasional references to the second kingdom of Israel (2 Chronicles 10–36). In the final chapter, Judah is destroyed and the people taken into exile in Babylon, and in the final verses the Persian king Cyrus the Great conquers the Neo-Babylonian Empire, and authorises the restoration of the Temple in Jerusalem, and the return of the exiles.[5]

Originally a single work, Chronicles was divided into two in the Septuagint, a Greek translation produced in the 3rd and 2nd centuries BC.[6] It has three broad divisions:

Within this broad structure there are signs that the author has used various other devices to structure his work, notably through drawing parallels between David and Solomon (the first becomes king, establishes the worship of Israel's God in Jerusalem, and fights the wars that will enable the Temple to be built, then Solomon becomes king, builds and dedicates the Temple, and reaps the benefits of prosperity and peace).[7]

Biblical commentator C. J. Ball suggests that the division into two books introduced by the translators of the Septuagint "occurs in the most suitable place",[8] namely with the conclusion of David's reign as king and the initiation of Solomon's reign.

The last events in Chronicles take place in the reign of Cyrus the Great, the Persian king who conquered Babylon in 539 BC; this sets the earliest possible date for the book. It was probably composed between 400–250 BC, with the period 350–300 BC the most likely.[7] The latest person mentioned in Chronicles is Anani, an eighth-generation descendant of King Jehoiachin according to the Masoretic Text. Anani's birth would likely have been sometime between 425 and 400 BC.[citation needed] The Septuagint gives an additional five generations in the genealogy of Anani. For those scholars who side with the Septuagint's reading, Anani's likely date of birth was a century later.[9]

Chronicles appears to be largely the work of a single individual, with some later additions and editing. The writer was probably male, probably a Levite (temple priest), and probably from Jerusalem. He was well-read, a skilled editor, and a sophisticated theologian. His intention was to use Israel's past to convey religious messages to his peers, the literary and political elite of Jerusalem in the time of the Achaemenid Empire.[7]

Jewish and Christian tradition identified this author as the 5th century BC figure Ezra, who gives his name to the Book of Ezra; Ezra was also believed to be the author of both Chronicles and Ezra–Nehemiah, but later critical scholarship abandoned the identification with Ezra and called the anonymous author "the Chronicler". One of the most striking, although inconclusive, features of Chronicles is that its closing sentence is repeated as the opening of Ezra–Nehemiah.[7] The latter half of the 20th century saw a radical reappraisal, and many now regard it as improbable that the author of Chronicles was also the author of the narrative portions of Ezra–Nehemiah.[10]

Much of the content of Chronicles is a repetition of material from other books of the Bible, from Genesis to Kings, and so the usual scholarly view is that these books, or an early version of them, provided the author with the bulk of his material. It is, however, possible that the situation was rather more complex, and that books such as Genesis and Samuel should be regarded as contemporary with Chronicles, drawing on much of the same material, rather than a source for it. There is also the question of whether the author of Chronicles used sources other than those found in the Bible: if such sources existed, it would bolster the Bible's case to be regarded as reliable history. Despite much discussion of this issue, no agreement has been reached.[11]

The translators who created the Greek version of the Jewish Bible (the Septuagint) called this book "Things Left Out", indicating that they thought of it as a supplement to another work, probably Genesis-Kings, but the idea seems inappropriate, since much of Genesis-Kings has been copied almost without change. Some modern scholars proposed that Chronicles is a midrash, or traditional Jewish commentary, on Genesis-Kings, but again this is not entirely accurate since the author or authors do not comment on the older books so much as use them to create a new work. Recent suggestions have been that it was intended as a clarification of the history in Genesis-Kings, or a replacement or alternative for it.[12]

Presbyterian theologian Paul K. Hooker argues that the generally accepted message the author wished to give to his audience was a theological reflection, not a "history of Israel":