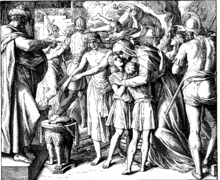 Martyrs refusing to sacrifice from Die Bibel in Bildern

1 Maccabees is a book written in Hebrew by a Jewish author after the restoration of an independent Jewish kingdom by the Hasmonean dynasty, about the latter part of the 2nd century BC. The original Hebrew is lost and the most important surviving version is the Greek translation contained in the Septuagint. The book is held as canonical scripture by the Catholic, Orthodox, and Oriental Orthodox churches (except for the Orthodox Tewahedo), but not by Protestant denominations nor any major branches of Judaism; it is not part of the Tanakh. Such Protestants consider it to be an apocryphal book (see also Deuterocanon).

1 Maccabees is best-known for containing the narrative behind the Jewish holiday of Hanukkah.

The setting of the book is about a century and a half after the conquest of Judea by the Greeks under Alexander the Great, after Alexander's empire has been divided so that Judea was part of the Greek Seleucid Empire. It tells how the Greek ruler Antiochus IV Epiphanes attempted to suppress the practice of basic Jewish law, resulting in the Maccabean Revolt (a Jewish revolt against Seleucid rule). The book covers the whole of the revolt, from 175 to 134 BC, highlighting how the salvation of the Jewish people in this crisis came through Mattathias' family, particularly his sons, Judas Maccabeus, Jonathan Apphus, and Simon Thassi, and Simon's son, John Hyrcanus. The doctrine expressed in the book reflects traditional Jewish teaching, without later doctrines found, for example, in 2 Maccabees. The First Book of Maccabees also gives a list of Jewish colonies scattered elsewhere through the Mediterranean at the time.[1]

In the first chapter, Alexander the Great conquers the territory of Judea, only to be eventually succeeded by the Seleucid Antiochus IV Epiphanes. After successfully invading the Ptolemaic Kingdom of Egypt, Antiochus IV captures Jerusalem and removes the sacred objects from the Temple in Jerusalem, slaughtering many Jews. He then imposes a tax and establishes a fortress in Jerusalem.

Antiochus then tries to suppress public observance of Jewish laws, in an attempt to secure control over the Jews. In 168 BC, he desecrates the Temple by setting up an "abomination of desolation" (that is, establishing rites of pagan observance in the Temple, or sacrificing an unclean animal on the altar in the Holy of Holies). Antiochus forbids both circumcision and possession of Jewish scriptures on pain of death. He forbids observance of the sabbath and the offering of sacrifices at the Temple. He also requires Jewish leaders to sacrifice to idols. While enforcement may be targeting only Jewish leaders, ordinary Jews were also killed as a warning to others.

Hellenization included the construction of gymnasiums in Jerusalem. Among other effects, this discouraged the Jewish rite of circumcision even further, which had already been officially forbidden; a man's state could not be concealed in the gymnasium, where men trained and socialized in the nude. However, 1 Maccabees also insists that there were many Jews who sought out or welcomed the introduction of Greek culture. According to the text, some Jewish men even engaged in foreskin restoration in order to pass as fully Greek.

Mattathias calls upon people loyal to the traditions of Israel to oppose the invaders and the Jewish Hellenizers, and his five[2] sons begin a military campaign against them (the Maccabean Revolt). There is one complete loss of a thousand Jews (men, women and children) to Antiochus when the Jewish defenders refuse to fight on the Sabbath. The other Jews then reason that, when attacked, they must fight even on the holy day. In 165 BC the Temple is freed and reconsecrated, so that ritual sacrifices may begin again. The festival of Hanukkah is instituted by Judas Maccabeus and his brothers to celebrate this event (1 Macc. 4:59). Judas seeks an alliance with the Roman Republic to remove the Greeks. He is succeeded by his brother Jonathan, who becomes high priest and also seeks alliance with Rome and confirms alliance with Areus of Sparta (1 Macc. 12:1–23). Simon follows them, receiving the double office of high priest and prince of Israel. (Simon and his successors form the Hasmonean dynasty, which is not always considered a valid kingship by the Jews, since they were not of the lineage of David.) Simon leads the people in peace and prosperity, until he is murdered by agents of Ptolemy, son of Abubus, who had been named governor of the region by the Macedonian Greeks. He is succeeded by his son, John Hyrcanus.

The name Maccabee in Hebrew, means "Hammer". This is properly applied to the first leader of the revolt, Judas, third son of Mattathias, whose attacks were "hammer-like". The name came to be used for his brothers as well, which accounts for the title of the book.

The Name "Maccabee" can also be derived from the first letters of each word מי כמוכה באלים י'ה "Who is like You from amongst the mighty, the LORD?" (Mem, Kaf, Bet, Yud). This Hebrew verse is taken from Exodus 15:11.

The narrative is primarily prose text, but is interrupted by seven poetic sections, which imitate classical Hebrew poetry. These include four laments and three hymns of praise.

The text comes to us in three codices of the Septuagint: the Codex Sinaiticus, Codex Alexandrinus and Codex Vaticanus, as well as some cursives.

Though the original book was written in Hebrew, as can be deduced by a number of Hebrew idioms in the text,[13] the original has been lost and the version which comes down to us is the Septuagint. Some authors date the original Hebrew text even closer to the events covered, while a few suggest a later date. Because of the accuracy of the historical account, if the later date is taken, the author would have to have had access to first-hand reports of the events or other primary sources.

Origen of Alexandria[14] gives testimony to the existence of an original Hebrew text. Jerome likewise claims "the first book of Maccabees I have found to be Hebrew, the second is Greek, as can be proved from the very style" (per Prologus Galeatus). Many scholars suggest that they may have actually had access to a Biblical Aramaic paraphrase of the work—but one should be aware of a "creeping Aramaicism", finding evidence for a vaguely Aramaic text when there is nothing definite to point to.[citation needed] Only the Greek text has survived, and this only through its inclusion in the Christian canon. Origen claims that the title of the original was Sarbēth Sarbanael (variants include Σαρβηθ Σα[ρ]βαναι ελ "Sarbēth Sa[r]banai El" and Σαρβηθ Σα[ρ]βανέελ Sarbēth Sa[r]baneel), an enigmatic Greek transliteration from a putative Hebrew original.[15] Various reconstructions have been proposed:

Gustaf Dalman, meanwhile, suggests that the title is a corruption of the Aramaic "The Book of the House of the Hasmoneans".[19]

The book's author is unknown, but some suggest that it may have been a devout Jew from the Holy Land who may have taken part in the events described in the book. He shows intimate and detailed geographical knowledge of the Holy Land, but is inaccurate in his information about foreign countries.[citation needed] The author interprets the events not as a miraculous intervention by God, but rather as God using the military genius of the Maccabees as the instrument to achieve his own ends.