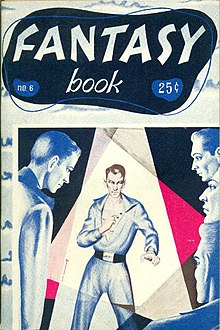 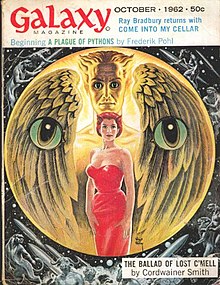 Smith's novelette The Ballad of Lost C'Mell was the cover story on the October 1962 issue of Galaxy Science Fiction. Artwork by Virgil Finlay.

Cordwainer Smith (/ˈkɔːrdweɪnər/ KORD-way-nər)[1] was the pen-name used by American author Paul Myron Anthony Linebarger (July 11, 1913 – August 6, 1966) for his science fiction works. Linebarger was a US Army officer, a noted East Asia scholar, and an expert in psychological warfare. Although his career as a writer was shortened by his death at age 53 he is considered one of the more talented and influential science fiction authors.[2]

Linebarger was born in Milwaukee, Wisconsin. His father, Paul M. W. Linebarger, was a lawyer and political activist with close ties to the leaders of the Chinese revolution of 1911. As a result of those connections, Linebarger's godfather was Sun Yat-sen, considered the father of Chinese nationalism.[3]

While Sun Yat-sen was struggling against contentious warlords in China, Linebarger's father moved his family between a variety of places in Asia, Europe, and the United States and sometimes sent his son to boarding schools for safety; Linebarger attended more than 30 schools. In 1919 at a boarding school in Hawaii he was blinded in his right eye; the vision in his remaining eye was impaired by infection.[3]

Linebarger was familiar with six languages by adulthood. At the age of 23, he received a PhD in political science from Johns Hopkins University.[3]

From 1937 to 1946, Linebarger held a faculty appointment at Duke University, where he began producing highly regarded works on Far Eastern affairs.

While retaining his professorship at Duke after the beginning of World War II, Linebarger began serving as a second lieutenant of the United States Army, where he was involved in the creation of the Office of War Information and the Operation Planning and Intelligence Board. He also helped organize the army's first psychological warfare section. In 1943, he was sent to China to coordinate military intelligence operations. When he later pursued his interest in China, Linebarger became a close confidant of Chiang Kai-shek. By the end of the war, he had risen to the rank of major.

In 1947, Linebarger moved to the Johns Hopkins University's School of Advanced International Studies in Washington, DC, where he served as Professor of Asiatic Studies. He used his experiences in the war to write the book Psychological Warfare (1948), regarded by many in the field as a classic text.

He eventually rose to the rank of colonel in the reserves. He was recalled to advise the British forces in the Malayan Emergency and the U.S. Eighth Army in the Korean War. While he was known to call himself a "visitor to small wars", he refrained from becoming involved in the Vietnam War, but is known to have done work for the Central Intelligence Agency. In 1969 CIA officer Miles Copeland Jr. wrote that Linebarger was "perhaps the leader practitioner of 'black' and 'gray' propaganda in the Western world".[4][5] According to Joseph Burkholder Smith, a former CIA operative, he conducted classes in psychological warfare for CIA agents at his home in Washington under cover of his position at the School of Advanced International Studies.[3] He traveled extensively and became a member of the Foreign Policy Association, and was called upon to advise President John F. Kennedy.

In 1950, Linebarger married again to Genevieve Collins; they had no children. They remained married until his death from a heart attack in 1966, at Johns Hopkins University Medical Center in Baltimore, Maryland, at age 53. Linebarger had expressed a wish to retire to Australia, which he had visited in his travels. He is buried in Arlington National Cemetery, Section 35, Grave Number 4712. His widow, Genevieve Collins Linebarger, was interred with him on November 16, 1981.[6]

Linebarger is long rumored to have been "Kirk Allen", the fantasy-haunted subject of "The Jet-Propelled Couch," a chapter in psychologist Robert M. Lindner's best-selling 1954 collection The Fifty-Minute Hour.[3][7] According to Cordwainer Smith scholar Alan C. Elms,[8] this speculation first reached print in Brian Aldiss's 1973 history of science fiction, Billion Year Spree; Aldiss, in turn, claimed to have received the information from Leon Stover.[9] More recently, both Elms and librarian Lee Weinstein[10] have gathered circumstantial evidence to support the case for Linebarger's being Allen, but both concede there is no direct proof that Linebarger was ever a patient of Lindner's or that he suffered from a disorder similar to that of Kirk Allen.[11]

According to Frederik Pohl

In his stories, which were a wonderful and inimitable blend of a strange, raucous poetry and a detailed technological scene, we begin to read of human beings in worlds so far from our own in space in time that they were no longer quite Earth (even when they were the third planet out from Sol), and the people were no longer quite human, but something perhaps better, certainly different[12]

Linebarger's identity as "Cordwainer Smith" was secret until his death.[12] ("Cordwainer" is an archaic word for "a worker in cordwain or cordovan leather; a shoemaker",[13] and a "smith" is "one who works in iron or other metals; esp. a blacksmith or farrier":[13] two kinds of skilled workers with traditional materials.) Linebarger also employed the literary pseudonyms "Carmichael Smith" (for his political thriller Atomsk), "Anthony Bearden" (for his poetry) and "Felix C. Forrest" (for the novels Ria and Carola).

Smith's stories are unusual, sometimes being written in narrative styles closer to traditional Chinese stories than to most English-language fiction, as well as reminiscent of the Genji tales of Lady Murasaki. The total volume of his science fiction output is relatively small, because of his time-consuming profession and his early death.

Smith's works consist of one novel, originally published in two volumes in edited form as The Planet Buyer, also known as The Boy Who Bought Old Earth (1964) and The Underpeople (1968), and later restored to its original form as Norstrilia (1975); and 32 short stories (collected in The Rediscovery of Man (1993), including two versions of the short story "War No. 81-Q").

Linebarger's cultural links to China are partially expressed in the pseudonym "Felix C. Forrest", which he used in addition to "Cordwainer Smith": his godfather Sun Yat-Sen suggested to Linebarger that he adopt the Chinese name "Lin Bai-lo" (simplified Chinese: 林白乐; traditional Chinese: 林白樂; pinyin: Lín Báilè), which may be roughly translated as "Forest of Incandescent Bliss". ("Felix" is Latin for "happy".) In his later years, Linebarger proudly wore a tie with the Chinese characters for this name embroidered on it.

As an expert in psychological warfare, Linebarger was very interested in the newly developing fields of psychology and psychiatry. He used many of their concepts in his fiction. His fiction often has religious overtones or motifs, particularly evident in characters who have no control over their actions. James B. Jordan argued for the importance of Anglicanism to Smith's works back to 1949.[14] But Linebarger's daughter Rosana Hart has indicated that he did not become an Anglican until 1950, and was not strongly interested in religion until later still.[15] The introduction to the collection Rediscovery of Man notes that from around 1960 Linebarger became more devout and expressed this in his writing. Linebarger's works are sometimes included in analyses of Christianity in fiction, along with the works of authors such as C. S. Lewis and J.R.R. Tolkien.

Most of Smith's stories are set in the far future, between 4,000 and 14,000 years from now.[16] After the Ancient Wars devastate Earth, humans, ruled by the Instrumentality of Mankind, rebuild and expand to the stars in the Second Age of Space around 6000 AD. Over the next few thousand years, mankind spreads to thousands of worlds and human life becomes safe but sterile, as robots and the animal-derived Underpeople take over many human jobs and humans themselves are genetically programmed as embryos for specified duties. Towards the end of this period, the Instrumentality attempts to revive old cultures and languages in a process known as the Rediscovery of Man, where humans emerges from their mundane utopia and Underpeople are freed from slavery.

For years, Linebarger had a pocket notebook which he had filled with ideas about The Instrumentality and additional stories in the series. But while in a small boat in a lake or bay in the mid 60s, he leaned over the side, and his notebook fell out of his breast pocket into the water, where it was lost forever. Another story claims that he accidentally left the notebook in a restaurant in Rhodes in 1965. With the book gone, he felt empty of ideas, and decided to start a new series which was an allegory of Mid-Eastern politics.[17][18]

Smith's stories describe a long future history of Earth. The settings range from a postapocalyptic landscape with walled cities, defended by agents of the Instrumentality, to a state of sterile utopia, in which freedom can be found only deep below the surface, in long-forgotten and buried anthropogenic strata. These features may place Smith's works within the Dying Earth subgenre of science fiction. They are ultimately more optimistic and distinctive.

After "Scanners Live in Vain", Smith's next story did not appear for several years, but from 1955 until his death in 1966 his stories appeared regularly, for the most part in Galaxy Science Fiction.[12] His universe featured strange and vivid creations, such as:

Titles marked with an asterisk * are independent stories not related to the Instrumentality universe.