From Wikipedia, the free encyclopedia
Jump to navigation Jump to search
Underworld in the Old Testament
For the Naglfar album, see Sheol (album).

Sheol (/ˈʃiːoʊl/ SHEE-ohl, /-əl/; Hebrew: שְׁאוֹל Šəʾōl), in the Hebrew Bible, is a place of darkness to which spirits of the dead go. Under some circumstances they are thought to be able to be contacted by the living. Sheol is also called Hades.

While the Hebrew Bible describes Sheol as the permanent place of the dead, in the Second Temple period (roughly 500 BC – 70 AD) Sheol is considered to be the home of the dead wicked, while paradise is the home of the dead righteous until the Last Judgement (e.g. 1 Enoch 22; Luke 16:19-31). In some texts, Sheol was considered a place of punishment, meant for the wicked dead,[1] and is equated with Gehenna in the Talmud.[2] When the Hebrew scriptures were translated into Greek in ancient Alexandria around 200 BC, the word "Hades" (the Greek underworld) was substituted for Sheol.[3] This is reflected in the New Testament where Hades is both the underworld of the dead and the personification of it.[1] 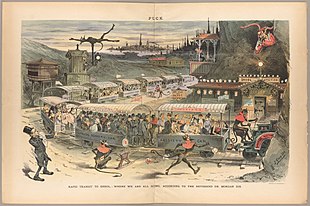 Rapid Transit to Sheol – Where We Are All Going According to the Reverend Dr. Morgan Dix, by Joseph Keppler, 1888.

According to Herbert C. Brichto, writing in Hebrew Union College Annual,[4] the family tomb is the central concept in understanding biblical views of the afterlife. Brichto states that it is "not mere sentimental respect for the physical remains that is...the motivation for the practice, but rather an assumed connection between proper sepulture and the condition of happiness of the deceased in the afterlife".[5]

According to Brichto, the early Israelites apparently believed that the graves of family, or tribe, united into one and that this, unified collectively, is to what the Biblical Hebrew term Sheol refers: the common grave of humans. Although not well defined in the Tanakh, Sheol in this view was a subterranean underworld where the souls of the dead went after the body died. The Babylonians had a similar underworld called Aralu and the Greeks had one known as Hades. According to Brichto, other biblical names for Sheol were: Abaddon (ruin), found in Psalm 88:11, Job 28:22 and Proverbs 15:11; Bor (the pit), found in Isaiah 14:15, 24:22, Ezekiel 26:20; and Shakhat (corruption), found in Isaiah 38:17, and Ezekiel 28:8.[6]

The Tanakh has few references to existence after death. The notion of resurrection of the dead appears in two biblical sources, Daniel (Daniel 12) and Isaiah (Isaiah 25–26).[7]

Personification in the Hebrew Bible[edit]

Wojciech Kosior has argued that "Sheol" in the Hebrew Bible refers to an underworld deity.[8] Some additional support for this hypothesis comes from the ancient Near Eastern literary materials. For example, the Akkadian plates mention the name shuwalu or suwala in reference to a deity responsible for ruling the abode of the dead. As such it might have been borrowed by the Hebrews and incorporated into their early belief system.[9] What is more, some scholars argue that Sheol understood anthropomorphically fits the semantic complex of the other ancient Near Eastern death deities such as Nergal, Ereshkigal or Mot.[10] Other scholars have cast doubt on these readings.[11][12]

A number of biblical texts reference Sheol.[13] The following is a selection:

Numbers 16:31-34: As soon as he finished saying all this, the ground under them split apart and the earth opened its mouth and swallowed them and their households, and all those associated with Korah, together with their possessions. They went down alive into the realm of the dead, with everything they owned; the earth closed over them, and they perished and were gone from the community. At their cries, all the Israelites around them fled, shouting, “The earth is going to swallow us too!”

Job 7:7-10: Remember, O God, that my life is but a breath; my eyes will never see happiness again. The eye that now sees me will see me no longer; you will look for me, but I will be no more. As a cloud vanishes and is gone, so one who goes down to the grave does not return. He will never come to his house again; his place will know him no more.

Psalm 88:2-10: May my prayer come before you; turn your ear to my cry. I am overwhelmed with troubles and my life draws near to death. I am counted among those who go down to the pit; I am like one without strength. I am set apart with the dead, like the slain who lie in the grave, whom you remember no more, who are cut off from your care. You have put me in the lowest pit, in the darkest depths. Your wrath lies heavily on me; you have overwhelmed me with all your waves. You have taken from me my closest friends and have made me repulsive to them. I am confined and cannot escape; my eyes are dim with grief. I call to you, Lord, every day; I spread out my hands to you. Do you show your wonders to the dead? Do their spirits rise up and praise you?

In the New Testament there are also passages describing Hades, such as the story of the rich man and Lazarus and Luke 16:19-31.