From Wikipedia, the free encyclopedia
(Redirected from Galilee earthquake of 363)
Jump to navigation Jump to search

The Galilee earthquake of 363 was a pair of severe earthquakes that shook the Galilee and nearby regions on May 18 and 19.[3] The maximum perceived intensity for the events was estimated to be VII (Very strong) on the Medvedev–Sponheuer–Karnik scale. The earthquakes occurred on the portion of the Dead Sea Transform (DST) fault system between the Dead Sea and the Gulf of Aqaba. 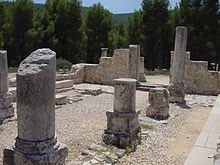 Remains of the Nabratein synagogue, 2005

Sepphoris, north-northwest of Nazareth, was severely damaged. Nabratein and the Nabratein synagogue (northeast of Safed) were destroyed.[4] The earthquake may have been responsible for the failure of the plan to rebuild the Temple in Jerusalem with the permission of the Emperor Julian.[5]

Petra, in what is now Jordan, was fatally damaged.