From Wikipedia, the free encyclopedia
Jump to navigation Jump to search
This article is about days of observance. For a leave of absence or a trip, see Vacation. For leave from employment, see Annual leave. For other uses, see Holiday (disambiguation) and Observance (disambiguation).
Festive day set aside by custom or by law

A holiday is a day set aside by custom or by law on which normal activities, especially business or work including school, are suspended or reduced. Generally, holidays are intended to allow individuals to celebrate or commemorate an event or tradition of cultural or religious significance. Holidays may be designated by governments, religious institutions, or other groups or organizations. The degree to which normal activities are reduced by a holiday may depend on local laws, customs, the type of job held or personal choices.

The concept of holidays often originated in connection with religious observances. The intention of a holiday was typically to allow individuals to tend to religious duties associated with important dates on the calendar. In most modern societies, however, holidays serve as much of a recreational function as any other weekend days or activities.

In many societies there are important distinctions between holidays designated by governments and holidays designated by religious institutions. For example, in many predominantly Christian nations, government-designed holidays may center on Christian holidays, though non-Christians may instead observe religious holidays associated with their faith. In some cases, a holiday may only be nominally observed. For example, many Jews in the Americas and Europe treat the relatively minor Jewish holiday of Hanukkah as a "working holiday", changing very little of their daily routines for this day.

The word holiday has differing connotations in different regions. In the United States the word is used exclusively to refer to the nationally, religiously or culturally observed day(s) of rest or celebration, or the events themselves, whereas in the United Kingdom and other Commonwealth nations, the word may refer to the period of time where leave from one's duties has been agreed, and is used as a synonym to the US preferred vacation. This time is usually set aside for rest, travel or the participation in recreational activities, with entire industries targeted to coincide or enhance these experiences. The days of leave may not coincide with any specific customs or laws. Employers and educational institutes may designate ‘holidays’ themselves which may or may not overlap nationally or culturally relevant dates, which again comes under this connotation, but it is the first implication detailed that this article is concerned with.

The word holiday comes from the Old English word hāligdæg (hālig "holy" + dæg "day").[1] The word originally referred only to special religious days. In modern use, it means any special day of rest or relaxation, as opposed to normal days away from work or school.

Winter in the Northern Hemisphere features many holidays that involve festivals and feasts. The Christmas and holiday season surrounds the Christmas and other holidays, and is celebrated by many religions and cultures. Usually, this period begins near the start of November and ends with New Year's Day. Holiday season in the US corresponds to the period that begins with Thanksgiving and ends with New Year's Eve. Some Christian countries consider the end of the festive season to be after the feast of Epiphany.

Sovereign nations and territories observe holidays based on events of significance to their history. For example, Americans celebrate Independence Day, celebrating the signing of the Declaration of Independence in 1776.

Other secular (non-religious) holidays are observed nationally, internationally (often in conjunction with organizations such as the United Nations), and across multi-country regions. The United Nations Calendar of Observances[2] dedicates decades to a specific topic, but also a complete year, month, week and days. Holidays dedicated to an observance such as the commemoration of the ending of World War II, or the Shoah, can also be part of the reparation obligation as per UN General Assembly Resolution 60/147 Basic Principles and Guidelines on the Right to a Remedy and Reparation for Victims of Gross Violations of International Human Rights Law and Serious Violations of International Humanitarian Law.[3]

Another example of a major secular holiday is the Lunar New Year, which is celebrated across East Asia and South East Asia. Many other days are marked to celebrate events or people, but are not strictly holidays as time off work is rarely given; examples include Arbor Day (originally U.S.), Labor Day (celebrated sometimes under different names and on different days in different countries), and Earth Day (22 April).

These are holidays that are not traditionally marked on calendars. These holidays are celebrated by various groups and individuals. Some promote a cause, others recognize historical events not officially recognized, and others are "funny" holidays celebrated with humorous intent. For example, Monkey Day is celebrated on December 14, International Talk Like a Pirate Day is observed on September 19, and Blasphemy Day is held on September 30. Other examples are April Fools' Day on April 1 and World No Tobacco Day on May 31. Various community organizers and marketers promote odd social media holidays. 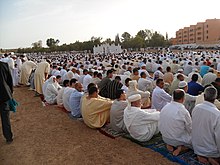 Many holidays are linked to faiths and religions (see etymology above). Christian holidays are defined as part of the liturgical year, the chief ones being Easter and Christmas. The Orthodox Christian and Western-Roman Catholic patronal feast day or "name day" are celebrated in each place's patron saint's day, according to the Calendar of saints. Jehovah's Witnesses annually commemorate "The Memorial of Jesus Christ's Death", but do not celebrate other holidays with any religious significance such as Easter, Christmas or New Year's. This holds especially true for those holidays that have combined and absorbed rituals, overtones or practices from non-Christian beliefs into the celebration, as well as those holidays that distract from or replace the worship of Jehovah.[4] In Islam, the largest holidays are Eid al-Fitr (immediately after Ramadan) and Eid al-Adha (at the end of the Hajj). Ahmadi Muslims additionally celebrate Promised Messiah Day, Promised Reformer Day, and Khilafat Day, but contrary to popular belief, neither are regarded as holidays. Hindus, Jains and Sikhs observe several holidays, one of the largest being Diwali (Festival of Light). Japanese holidays as well as few Catholic holidays contain heavy references to several different faiths and beliefs. Celtic, Norse, and Neopagan holidays follow the order of the Wheel of the Year. For example, Christmas ideas like decorating trees and colors (green, red, and white) have very similar ideas to modern Wicca (a modern Pagan belief) Yule which is a lesser Sabbat of the wheel of the year. Some are closely linked to Swedish festivities. The Baháʼí Faith observes 11 annual holidays on dates determined using the Baháʼí calendar. Jews have two holiday seasons: the Spring Feasts of Pesach (Passover) and Shavuot (Weeks, called Pentecost in Greek); and the Fall Feasts of Rosh Hashanah (Head of the Year), Yom Kippur (Day of Atonement), Sukkot (Tabernacles), and Shemini Atzeret (Eighth Day of Assembly).

If a holiday coincides with another holiday or a weekend day a substitute holiday may be recognised in lieu. In the United Kingdom the government website states that "If a bank holiday is on a weekend, a 'substitute' weekday becomes a bank holiday, normally the following Monday.", and the list of bank holidays for the year 2020 includes Monday 28 December as "Boxing Day (substitute day)", as 26 December is a Saturday.[5] The process of moving a holiday from a weekend day to the following Monday is known as Mondayisation in New Zealand.[6]