From Wikipedia, the free encyclopedia
Jump to navigation Jump to search
For other uses, see Holy family (disambiguation). 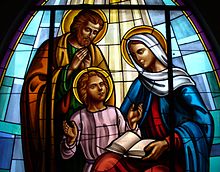 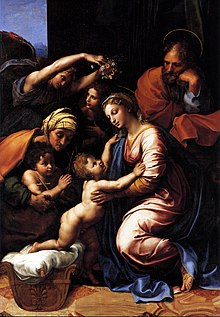 The Holy Family, by Raphael 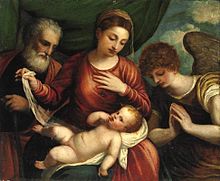 The Holy Family consists of the Child Jesus, the Virgin Mary, and Saint Joseph. Veneration of the Holy Family was formally begun in the 17th century by Saint François de Laval, the first bishop of New France, who founded a Confraternity.

The Feast of the Holy Family is a liturgical celebration in the Catholic Church and some Anglican Churches in honor of Jesus, his mother, and his legal father, Saint Joseph, as a family. The primary purpose of this feast is to present the Holy Family as a model for Christian families.[1]

The Feast is held on the Sunday between Christmas and New Year's Day; If both are Sundays, the feast is celebrated on December 30th. 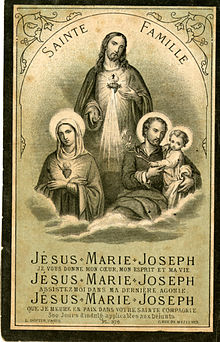 The Gospels speak little of the life of the Holy Family in the years before Jesus’ public ministry.[2]

Matthew and Luke narrate the episodes from this period of Christ's life, namely his circumcision and later Presentation, the flight to Egypt, the return to Nazareth, and the Finding in the Temple.[1] Joseph and Mary were apparently observant Jews, as Luke narrates that they brought Jesus with them on the annual pilgrimage to Jerusalem with other Jewish families.

The Feast of the Holy Family is a liturgical celebration in the Catholic Church in honor of Jesus of Nazareth, his mother, the Blessed Virgin Mary, and his foster father, Saint Joseph, as a family. The primary purpose of this feast is to present the Holy Family as a model for Christian families.[1]

The 1969 revision of the General Roman Calendar moved the celebration to Christmastide, assigning it to the Sunday within the Octave of Christmas, that is, the Sunday between Christmas Day and New Year's Day (both exclusive), or if both Christmas Day and the Solemnity of Mary, Mother of God are Sundays, on 30 December (always a Friday in such years). When not celebrated on a Sunday, it is not a holy day of obligation.[5]

Formerly, the Sunday within the Octave of Christmas was in fact celebrated only if it fell on 29, 30 or 31 December, since it gave way to the higher ranked feasts of Saint Stephen, Saint John the Apostle and the Holy Innocents. The Feast of the Holy Family that has replaced it outranks these three feasts.

The Holy Family is a popular theme in Christian art. An oil painting by the Dutch Joos van Cleve, dated to about 1512, is on display at the New York Metropolitan Museum of Art.[6] Michelangelo's tempera rendition (c. 1506) hangs in the Uffizi in Florence, Italy.[7] A Holy Family by Giulio Romano is on view at the Getty Center in Los Angeles, California.[8]

The Cathedral of the Holy Family of Nazareth is the see of the Diocese of Tulsa in Oklahoma.[9]

A pious practice among Catholics is to write "J.M.J." at the top of letters and personal notes as a reference to Jesus, Mary, and Joseph as the Holy Family.[10]