From Wikipedia, the free encyclopedia
Jump to navigation Jump to search
This article is about the person in Genesis 4. For other people of this name, see Jubal. 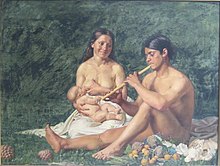 Jubal (also Yuval or Yubal; Hebrew: יוּבָל – Yūḇāl) is a man mentioned in the Hebrew Bible, in Genesis 4:21.

Jubal was a descendant of Cain, the son of Lamech and Adah, and the brother of Jabal, and half-brother of Tubal-cain and Naamah.