From Wikipedia, the free encyclopedia
Jump to navigation Jump to search
Biblical figure
For other uses, see Tubalcain (disambiguation).

Tubal-cain or Tubalcain (Hebrew: תּוּבַל קַיִן – Tū́ḇal Qáyin) is a person mentioned in the Bible, in Genesis 4:22 as well as in the Hebrew Book of Jasher, known for being the first blacksmith.

A descendant of Cain, he was the son of Lamech and Zillah. He was the brother of Naamah and half-brother of Jabal and Jubal. 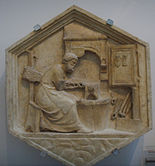 In Hebrew, his name is תּוּבַל קַיִן (Tū́ḇal Qáyin). In the King James Version, this is rendered as Tubalcain. In the New International Version and the English Standard Version, it is Tubal-cain; the Latin Vulgate renders him as Thubalcain. Rashi interprets the name to mean "he who spices the craft of Cain."[1]

It is not clear why he has a double-barreled first name. Gordon Wenham suggests that the name Cain means smith (which would anticipate the remarks about his metalworking skill), or that he is called Tubal Cain in order to distinguish him from the other Tubal, the son of Japheth.[2]

Richard Coggins suggests it "may be a variant of the same tradition which lists Tubal in the table of nations" at Gen 10, as a land well known for metalwork.[3]

In the Book of Jasher (Pseudo-Jasher) (1751), the name of Tubal-Cain is explained by Zillah, his mother: "After I had withered away have I obtained him from the Almighty God" (2:24). The intended conclusion here is that "Cain" (given earlier in the idea of "obtaining") was merged with "Tubal", a word seemingly to denote "withering" by contextual speculation.[citation needed]

Genesis 4:22 says that Tubal-cain was the "forger of all instruments of bronze and iron" (ESV) or an "instructor of every artificer in brass and iron" (KJV). Although this may mean he was a metalsmith, a comparison with verses 20 and 21 suggests that he may have been the very first artificer in brass and iron. T. C. Mitchell suggests that he "discovered the possibilities of cold forging native copper and meteoric iron."[4] Tubal-cain has even been described as the first chemist.[5]

In Antiquities of the Jews, Josephus says that "Tubal exceeded all men in strength, and was very expert and famous in martial performances, ... and first of all invented the art of working brass."[citation needed] Walter Elwell suggests that his invention of superior weapons may have been the motivation for Lamech's interest in avenging blood.[6] Alternatively, E. E. Kellett suggests that Tubal-cain may have been a miner.[7]