From Wikipedia, the free encyclopedia
Jump to navigation Jump to search
Division of Semitic languages of the Levant

Northwest Semitic is a division of the Semitic languages comprising the indigenous languages of the Levant. It would have emerged from Common Semitic in the Early Bronze Age. It is first attested in proper names identified as Amorite in the Middle Bronze Age. The oldest coherent texts are in Ugaritic, dating to the Late Bronze Age, which by the time of the Bronze Age collapse are joined by Old Aramaic, and by the Iron Age by the Canaanite languages (Phoenician and Hebrew).[2]

The term was coined by Carl Brockelmann in 1908,[3] who separated Fritz Hommel's 1883 classification of "West Semitic languages"[3] into Northwest (Canaanite and Aramaic) and Southwest (Arabic and Abyssinian).[4]

Brockelmann's Canaanite sub-group includes Ugaritic, Phoenician and Hebrew. Some scholars would now separate Ugaritic as a separate branch of Northwest Semitic alongside Canaanite. Central Semitic is a proposed intermediate group comprising Northwest Semitic and Arabic. Central Semitic is either a subgroup of West Semitic or a top-level division of Semitic alongside East Semitic and South Semitic.[5] SIL Ethnologue in its system of classification (of living languages only) eliminates Northwest Semitic entirely by joining Canaanite and Arabic in a "South-Central" group which together with Aramaic forms Central Semitic.[6] The Deir Alla Inscription and Samalian have been identified as language varieties falling outside Aramaic proper but with some similarities to it, possibly in an "Aramoid" or "Syrian" subgroup.[7][8]

It is clear that Taymanitic script expressed a distinct linguistic variety that is not Arabic and not closely related to Hismaic or Safaitic, while it can tentatively be suggested that it was more closely related to Northwest Semitic.[9] 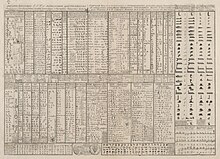 During the early 1st millennium, the Phoenician language was spread throughout the Mediterranean by Phoenician colonists, most notably to Carthage in today's Tunisia. The Phoenician alphabet is of fundamental importance in human history as the source and ancestor of the Greek alphabet, the later Latin alphabet, the Aramaic (Square Hebrew), Syriac, and Arabic writing systems, Germanic runes, and ultimately Cyrillic.

By the 6th century BC, the use of Aramaic spread throughout the Northwest Semitic region (see Imperial Aramaic), largely driving the other Northwest Semitic languages to extinction. The ancient Judaeans adopted Aramaic for daily use, and parts of the Tanakh are written in it. Hebrew was preserved, however, as a Jewish liturgical language and language of scholarship, and resurrected in the 19th century, with modern adaptations, to become the Modern Hebrew language of the State of Israel.

After the Muslim conquests of the 7th century, Arabic began to gradually replace Aramaic throughout the region. Aramaic survives today as the liturgical language of the Syriac Christian Church, and is spoken in modern dialects by small and endangered populations scattered throughout the Middle East. There is also an Aramaic substratum in Levantine Arabic.

Phonologically, Ugaritic lost the sound *ṣ́, replacing it with /t͡s/ (ṣ) (the same shift occurred in Canaanite and Akkadian). That this same sound became /ʕ/ in Aramaic (although in Ancient Aramaic, it was written with qoph), suggests that Ugaritic is not the parent language of the group. An example of this sound shift can be seen in the word for earth: Ugaritic /ʔart͡s/ (’arṣ), Punic /ʔart͡s/ (’arṣ), Hebrew /ʔɛrɛt͡s/ (’ereṣ) and Aramaic /ʔarʕaː/ (’ar‘ā’).

The vowel shift from *aː to /oː/ distinguishes Canaanite from Ugaritic. Also, in the Canaanite group, the series of Semitic interdental fricatives become sibilants: *ð (ḏ), *θ (ṯ) and *θ̣ (ṱ) became /z/, /ʃ/ (š) and /sˤ/ (ṣ) respectively. The effect of this sound shift can be seen by comparing the following words: