From Wikipedia, the free encyclopedia
Jump to navigation Jump to search
Genus of birds

Struthio is a genus of bird in the order Struthioniformes. There are two living species, the common ostrich and the Somali ostrich.

The genus Struthio was first described by Carl Linnaeus in 1758. The genus was used by Linnaeus and other early taxonomists to include the emu, rhea and cassowary, until they each were placed in their own genera.[1] The Somali ostrich (Struthio molybdophanes) has recently become recognized as a separate species by most authorities, while others are still reviewing the evidence.[2][3] 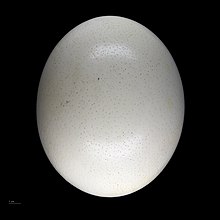 The earliest fossils of ostrich-like birds are Paleocene taxa from Europe.[4] Palaeotis and Remiornis from the Middle Eocene and unspecified ratite remains are known from the Eocene and Oligocene of Europe and Africa. These may have been early relatives of the ostriches, but their status is questionable, and they may in fact represent multiple lineages of flightless paleognaths.[4][5]

The earliest fossils from this genus are from the early Miocene (20–25 mya), and are from Africa, so it is proposed that they originated there. Then by the middle to late Miocene (5–13 mya) they had spread to Eurasia.[6] By about 12 mya they had evolved into the larger size of which we are familiar. By this time they had spread to Mongolia and later southern Africa.[7] While the relationship of the African fossil species is comparatively straightforward, many Asian species of ostrich have been described from fragmentary remains, and their interrelationships and how they relate to the African ostriches are confusing. In China, ostriches are known to have become extinct only around or even after the end of the last ice age; images of ostriches have been found there on prehistoric pottery and petroglyphs.[8][9][10]

Struthio ostriches once co-existed with another lineage of flightless didactyl birds, the eogruids. Though Olson 1985 classified these birds as stem-ostriches, they are otherwise universally considered to be related to cranes, any similarities being the result of convergent evolution. Competition from ostriches has been suggested to have caused the extinction of the eogruids,[11][12] though this has never been tested and both groups do co-exist in some sites.[13]

There are nine known species from this genus, of which seven are extinct. Three additional species, S. pannonicus, S. dmanisensis (the giant ostrich), and S. transcaucasicus, were transferred to the genus Pachystruthio in 2019.[14] Several additional fossil forms are ichnotaxa (that is, classified according to the organism's trace fossils such as footprints rather than its body) and their association with those described from distinctive bones is contentious and in need of revision pending more good material.[15]