From Wikipedia, the free encyclopedia
(Redirected from Perea (Bible))
Jump to navigation Jump to search
For the surname, see Perea (surname).

Perea and its surroundings in the 1st century CE 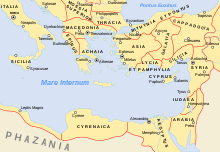 Perea or Peraea (Greek: Περαία, "the country beyond"), was the portion of the kingdom of Herod the Great occupying the eastern side of the Jordan River valley, from about one third the way down the Jordan River segment connecting the Sea of Galilee and the Dead Sea to about one third the way down the north-eastern shore of the Dead Sea; it did not extend very far to the east. Herod the Great's kingdom was bequeathed to four heirs, of which Herod Antipas received both Perea and Galilee.[1] He dedicated the city Livias in the north of the Dead Sea.[2] In 39 CE, Perea and Galilee were transferred from disfavoured Antipas to Agrippa I by Caligula.[3] With his death in 44 CE, Agrippa's merged territory was made a province again, including Judaea and for the first time, Perea.[4] From that time[5] Perea was part of the shifting Roman provinces to its west: Judaea, and later Syria Palaestina, Palaestina and Palaestina Prima. Attested mostly in Josephus' books, the term was in rarer use in the late Roman period. It appears in Eusebius' Greek language geographical work, Onomasticon, but in the Latin translation by Jerome, Transjordan is used.

Gadara of Perea (identified as Tell Jadur near Al-Salt ) was the chief city or metropolis of Perea (not to be confused with Gadara of the Decapolis−a Hellenistic city).[6][7] Following the Roman conquest of Judea led by Pompey in 63 BCE, Aulus Gabinius, proconsul of Syria, split the former Hasmonean Kingdom into five districts of legal and religious councils known as Sanhedrin and based at Jerusalem, Jericho, Sepphoris (Galilee), Amathus (Perea) and Gadara (Perea—Al-Salt or Decapolis—Umm Qais).[8][9][10][11][12]

Pliny the Elder and Josephus[edit]

['Greater Judea' or 'Provincia Iudaea', incorporates Samaria and Idumea into an expanded territory.] The part of Judaea adjoining Syria is called Galilee, and that next to Arabia and Egypt Peraea. Peraea is covered with rugged mountains, and is separated from the other parts of Judaea by the river Jordan (in the original Latin: "Supra Idumaeam et Samariam Iudaea longe lateque funditur. Pars eius Syriae iuncta Galilaea vocatur, Arabiae vero et Aegypto proxima Peraea, asperis dispersa montibus et a ceteris Iudaeis Iordane amne discreta.")[13][14][15]

Peraea ...much larger indeed [than Galilee], is generally desert and rugged, and too wild for the growth of delicate fruits. In some parts, however the soil is loamy and prolific, and trees of various kinds cover the plains ; but the olive-tree, the vine, and the palm tree, are those principally cultivated. It is also sufficiently irrigated by mountain streams ; and (should these in the dog-days fail) by ever flowing springs. In length, it extends from Machaerus to Pella : in breadth, from Philadelphia to the Jordan : its northern districts being bounded, as we have already said, by Pella ; and those on the west, by the river. The land of Moab forms its southern limit ; while Arabia and Silbonitis, with Philadelphia and Gerasa, constitute its eastern boundary.[16][17]

Ptolemy does not use the term Perea in his Geography, but rather the periphrasis "across the Jordan". And he enumerates the "Perean" cities; Cosmas, Libias, Callirhoe, Gazorus, Epicaeros in this district.[18][19][20][21]

Perea was the area inhabited by the Israelite Tribes Reuben, Gad, and the half tribe of Manasseh.[citation needed] New Testament commentators speak of Jesus' "Perean Ministry", beginning with his departure from Galilee (Matthew 19:1; Mark 10:1) and ending with the anointing by Mary in Bethany (Matthew 26:6) or his journey towards Jerusalem commencing from Mark 10:32.

The Christian Armenians who were deported from Armenia and forcibly settled in the New Julfa/Isfahan region of Iran named a major village "Perea" in honor of the important significance of Perea as the resting place of John the Baptist.