From Wikipedia, the free encyclopedia
Jump to navigation Jump to search
For other uses, see Bukhari. 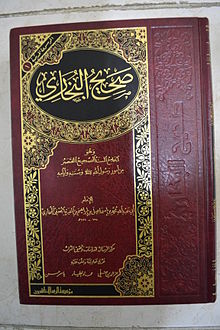 Ṣaḥīḥ al-Bukhārī (Arabic: صحيح البخاري‎) is one of the Kutub al-Sittah (six major hadith collections) of Sunni Islam. Whereas, out of all these six major books, the collection of prophetic traditions, or hadith for Sahih al-Bukhari, was performed by the Muslim scholar Muhammad al-Bukhari. It was completed around 846 CE / 232 AH. Sunni Muslims view this as one of the two most trusted collections of hadith along with Sahih Muslim.[1][2] The Arabic word sahih translates as authentic or correct.[3] Sahih al-Bukhari, together with Sahih Muslim is known as Sahihayn.

According to Ibn al-Salah the book is called: al-Jaami’ al-Sahih al-Musnad al-Mukhtasar min Umuri Rasooli-llahi wa sunanihi wa Ayyaamihi (The Abridged Collection of Authentic Hadith with Connected Chains regarding Matters Pertaining to the Prophet, His practices and His Times)[4]Ibn Hajar al-Asqalani mentioned the same title, replacing the word umur (English: matters) with hadith.[5]

Al-Bukhari traveled widely throughout the Abbasid Caliphate from the age of 16, collecting those traditions he thought trustworthy. It is reported that al-Bukhari devoted 16 years to sifting the hadiths he included in his Sahih from a collection of nearly 600,000 narrations.[6] Sources differ on the exact number of hadiths in Bukhari's Sahih, depending on whether a hadith is defined as a Prophetic tradition or a narration of that tradition. Experts, in general, have estimated the number of full-isnad narration at 7,563, and without considerations to repetitions or different versions of the same report, the number of Prophetic traditions reduces to approximately 2,602.[6] At the time when Bukhari saw the earlier works and conveyed them, he found them, in their presentation, combining between what would be considered sahih (correct) and hasan (good) and that many of them included daʻīf (weak) hadith. This aroused his interest in compiling hadith whose authenticity was beyond doubt. What further strengthened his resolve was something his teacher, hadith scholar Ishaq ibn Ibrahim al-Hanthalee – better known as Ishaq Ibn Rahwayh – had told him. "We were with Ishaq Ibn Rahwayh who said, ‘If only you would compile a book of only authentic narrations of the Prophet.’ This suggestion remained in my heart so I began compiling the Sahih." Bukhari also said, "I saw the Prophet in a dream and it was as if I was standing in front of him. In my hand was a fan with which I was protecting him. I asked some dream interpreters, who said to me, ‘You will protect him from lies.’ This is what compelled me to produce the Sahih."[7]

The book covers almost all aspects of life in providing proper guidance of Islam such as the method of performing prayers and other actions of worship directly from the Islamic prophet, Muhammad. Bukhari finished his work around 846/232 AH, and spent the last twenty-four years of his life visiting other cities and scholars, teaching the hadith he had collected. In every city that Bukhari visited, thousands of people would gather in the main mosque to listen to him recite traditions. In reply to Western academic doubts as to the actual date and authorship of the book that bears his name, scholars point out that notable hadith scholars of that time, such as Ahmad ibn Hanbal (855 CE/241 AH), Yahya ibn Ma'in (847 CE/233 AH), and Ali ibn al-Madini (848 CE/234 AH), accepted the authenticity of his book[8] and that the collection's immediate fame makes it unlikely that it could have been revised after the author's death without historical record.

During this period of twenty-four years, al-Bukhari made minor revisions to his book, notably the chapter headings. Each version is named by its narrator. Ibn Hajar al-Asqalani in his book Nukat asserts the number of hadiths is the same in each version. The most famous one today is the version narrated by al-Firabri (d. 932 CE/320 AH), a trusted student of Bukhari, from which all printed editions derive today. Al-Khatib al-Baghdadi in his book History of Baghdad quoted Firabri as saying: "About seventy thousand people heard Sahih Bukhari with me".

Firabri is not the only transmitter of Sahih al-Bukhari. Many others narrated the book to later generations, such as Ibrahim ibn Ma'qal (d. 907 CE/295 AH), Hammad ibn Shaker (d. 923 CE/311 AH), Mansur Burduzi (d. 931 CE/319 AH) and Husain Mahamili (d. 941 CE/330 AH). There are many books that noted differences between these versions, the best known being Fath al-Bari.

The Orientalist Manjana said in Cambridge in 1936 that the oldest manuscript he had come across up to that point was written in 984 CE/370 AH, according to the narration of al-Mirwazi from al-Farbari[10] The oldest full manuscript which was printed by ISAM is from 1155/550 AH.[11]

Ibn al-Salah said: "The first to author a Sahih was Bukhari, Abū ʿAbd Allāh Muḥammad ibn Ismāʿīl al-Juʿfī, followed by Abū al-Ḥusayn Muslim ibn al-Ḥajjāj an-Naysābūrī al-Qushayrī, who was his student, sharing many of the same teachers. These two books are the most authentic books after the Qurʾān. As for the statement of Al-Shafi‘i, who said "I do not know of a book containing knowledge more correct than Malik's book," – others mentioned it with a different wording – he said this before the books of Bukhari and Muslim. The book of Bukhari is the more authentic of the two and more useful."[4]

Ibn Hajar al-Asqalani quoted Abu Jaʿfar al-‘Uqailee as saying, "After Bukhari had written the Sahih, he read it to Ali ibn al-Madini, Ahmad ibn Hanbal, Yahya ibn Ma'in as well as others. They considered it a good effort and testified to its authenticity with the exception of four hadith. Al-‘Uqailee then said that Bukhari was actually correct regarding those four hadith." Ibn Hajar then concluded, "And they are, in fact, authentic."[14]

Ibn al-Salah said in his Muqaddimah ibn al-Ṣalāḥ fī ʿUlūm al-Ḥadīth: "It has been narrated to us that Bukhari has said, 'I have not included in the book al-Jami’ other than what is authentic and I did not include other authentic hadith for the sake of brevity.'"[4] In addition, al-Dhahabi said, "Bukhari was heard saying, 'I have memorized one hundred thousand authentic hadith and two hundred thousand which are less than authentic.'"[15]

At least one famous ahaad (solitary) hadith in Bukhari, regarding women's leadership,[16] based upon its content and its hadith narrator (Abu Bakr), is believed by some authors to be inauthentic. Shehadeh uses gender theory to critique the hadith,[17] while Farooq believes that such hadiths are inconsistent with reforming Islam.[18] Affi and Affi also apply contemporary interpretations to Shariah law in discussing the hadith.[19]

Another hadith ("Three things bring bad luck: house, woman, and horse."), reported by Abu Hurairah, has been criticized by Fatema Mernissi for being reported out of context and without any further clarification in Bukhari's collection. The clarification is given in a hadith reported by Aisha in Imam Zarkashi's (1344-1392) hadith collection: "...He [Abu Hurairah] came into our house when the Prophet was in the middle of a sentence. He only heard the end of it. What the Prophet said was: 'May God refute the Jews; they say three things bring bad luck: house, woman, and horse.'" This case raises the question of whether other hadith in Bukhari have been reported incompletely and lacking proper context.[20] However, Abu Huraira was not the only contemporary of Muhammad to have reported this hadith.

Certain Prophetic medicine and remedies espoused in Bukhari, such as cupping, have been noted for being unscientific.[21] Sunni scholar Ibn Hajar al-Asqalani, on the basis of contrary archaeological evidence, criticised the hadith[22] which claimed that Adam's height was 60 cubits and human height has been decreasing ever since.[23]

Rachid Aylal published a critical book on Bukhari's work in 2017, Sahih Al-Bukhari… The End of a Legend. It was banned in Morocco for disturbing spiritual security, purportedly due to pressure from Islamists.[24]

Ibn al-Salah also said: "The number of hadith in his book, the Sahih, is 7,275 hadith, including hadith occurring repeatedly. It has been said that this number excluding repeated hadith is 2,230."[4] This is referring to those hadith which are musnad,[25] those from the Companions originating from Muhammad which are authentic.[26] 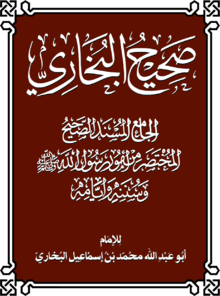 Several detailed commentaries on this collection have been written, estimated to number around 400,[27] such as:

One of the most important aspects in Sahih al-Bukhari is tarjamah al-bab[41] or giving name of the chapter. Many great scholars adopted a common saying: "The Fiqh of Bukhari in His Chapters". Not many scholars have commented on this aspect except Hafiz Ibn Hajar Asqalani and a few others. Shah Waliyullah Muhadith Dehlawi had mentioned 14 usul (methods) to understand Abwab wa Tarajim, then added by Hind Maulana Shaykh Mahmud Hasan Ad-Deobandi to make it 15 usul. A study conducted by Syaikhul Hadith Maulana Muhammad Zakariyya had found as many as 70 usul. He wrote specifically about Tarajim Saheeh Al-Bukhari in his book, Al-Abwab wa At-Tarajim li Shahih Al-Bukhari[41] [40]

In 2019, the Arabic Virtual Translation Center in New York translated and published the first complete English translation of Sahih Al-Bukhari with full sanad and commentary. This work, titled Encyclopedia of Sahih Al-Bukhari, includes explanatory notes, a glossary of every term, and biographies of all characters. 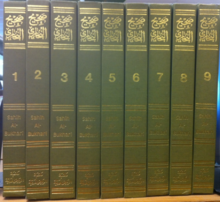 Sahih al-Bukhari was originally translated into English by Muhammad Muhsin Khan under the title "The Translation of the Meanings of Sahih Al Bukhari Arabic English" (1971) in nine volumes.[42] The text used for this work is Fath Al-Bari, published by the Egyptian Press of Mustafa Al-Babi Al-Halabi in 1959.[clarification needed] It is published by Al Saadawi Publications and Dar-us-Salam and is included in the USC-MSA Compendium of Muslim Texts.[43] Large numbers of selected hadith from it have been translated by Muhammad Ali and Thomas Cleary.

The book is also available in numerous languages including Urdu, Bengali, Bosnian, Tamil, Malayalam,[44] Albanian, Malay, Hindi among others.