From Wikipedia, the free encyclopedia
Jump to navigation Jump to search
This article is about the deity and the place in Greek mythology. For other uses, see Tartarus (disambiguation). 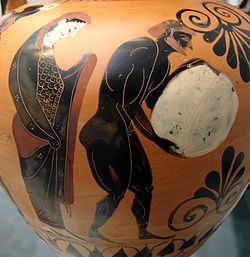 In Greek mythology, Tartarus (/ˈtɑːrtərəs/; Ancient Greek: Τάρταρος, Tártaros)[1] is the deep abyss that is used as a dungeon of torment and suffering for the wicked and as the prison for the Titans. Tartarus is the place where, according to Plato's Gorgias (c. 400 BC), souls are judged after death and where the wicked received divine punishment. Tartarus is also considered to be a primordial force or deity alongside entities such as the Earth, Night and Time.

In Greek mythology, Tartarus is both a deity and a place in the underworld. In ancient Orphic sources and in the mystery schools, Tartarus is also the unbounded first-existing entity from which the Light and the cosmos are born.

In the Greek poet Hesiod's Theogony (c. late 8th century BC), Tartarus was the third of the primordial deities, following after Chaos and Gaia (Earth), and preceding Eros,[2] and was the father, by Gaia, of the monster Typhon.[3] According to Hyginus, Tartarus was the offspring of Aether and Gaia.[4]

As for the place, Hesiod asserts that a bronze anvil falling from heaven would fall nine days before it reached the earth. The anvil would take nine more days to fall from earth to Tartarus.[5] In the Iliad (c. 8th century BC), Zeus asserts that Tartarus is "as far beneath Hades as heaven is above earth."[6] Similarly the mythographer Apollodorus, describes Tartarus as "a gloomy place in Hades as far distant from earth as earth is distant from the sky."[7]

While according to Greek mythology the realm of Hades is the place of the dead, Tartarus also has a number of inhabitants. When Cronus came to power as the King of the Titans, he imprisoned the one-eyed Cyclopes and the hundred-armed Hecatonchires in Tartarus and set the monster Campe as its guard. Zeus killed Campe and released these imprisoned giants to aid in his conflict with the Titans. The gods of Olympus eventually triumphed. Cronus and many of the other Titans were banished to Tartarus, though Prometheus, Epimetheus, and female Titans such as Metis were spared (according to Pindar, Cronus somehow later earned Zeus' forgiveness and was released from Tartarus to become ruler of Elysium). Another Titan, Atlas, was sentenced to hold the sky on his shoulders to prevent it from resuming its primordial embrace with the Earth. Other gods could be sentenced to Tartarus as well. Apollo is a prime example, although Zeus freed him. The Hecatonchires became guards of Tartarus' prisoners. Later, when Zeus overcame the monster Typhon, he threw him into "wide Tartarus".[8]

Originally, Tartarus was used only to confine dangers to the gods of Olympus. In later mythologies, Tartarus became a space dedicated to the imprisonment and torment of mortals who had sinned against the gods, and each punishment was unique to the condemned. For example:

Greek mythology also mentions Arke, Ocnus, Phlegyas, the Aloadaes and the Titans as inhabitants of Tartarus.

According to Plato (c. 427 BC), Rhadamanthus, Aeacus and Minos were the judges of the dead and chose who went to Tartarus. Rhadamanthus judged Asian souls, Aeacus judged European souls and Minos was the deciding vote and judge of the Greek.[17] Souls regarded as unjust or perjured would go to Tartarus.[17] Those who committed crimes seen as curable would be purified there, while those who committed crimes seen als uncurable would be eternally damned, and demonstrate a warning example for the living.[17] In Gorgias, Plato writes about Socrates telling Callicles, who believes Might makes right,[18] that doing injustice to others is worse than suffering injustice, and most uncurable inhabitants of Tartarus were tyrants whose might gave them the opportunity to commit huge crimes.[17] Archelaus I of Macedon is mentioned as a possible example of this, while Thersites is said to be curable, because of his lack of might.[17] According to Plato's Phaedo, the uncurable consisted of huge temple robbers and murderers, while sons who killed one of their parents during a status of rage but regreted this their whole live long, and involuntary manslaughterers, would be taken out of Tartarus after one year, so they could ask their victims for forgiveness.[19] If they should be forgiven, they were liberated, but if not, would go back and stay there until they were finally pardoned.[19] In the Republic, Plato mentions the Myth of Er, who is said to have been a fallen soldier who resurrected from the dead, and saw their realm.[20] According to this, the length of a punishment an adult receives for each crime in Tartarus, who is responsible for a lot of deaths, betrayed states or armies and sold them into slavery or had been involved in similar misdeeds, corresponds to ten times out of a hundred earthly years (while good deeds would be rewarded in equal measure).[20]

There were a number of entrances to Tartarus in Greek mythology. One was in Aornum.[21]

In Roman mythology, Tartarus is the place where sinners are sent. Virgil describes it in the Aeneid as a gigantic place, surrounded by the flaming river Phlegethon and triple walls to prevent sinners from escaping from it. It is guarded by a hydra with fifty black gaping jaws, which sits at a screeching gate protected by columns of solid adamantine, a substance akin to diamond – so hard that nothing will cut through it. Inside, there is a castle with wide walls, and a tall iron turret. Tisiphone, one of the Erinyes who represents revenge, stands guard sleepless at the top of this turret lashing a whip. There is a pit inside which is said to extend down into the earth twice as far as the distance from the lands of the living to Olympus. At the bottom of this pit lie the Titans, the twin sons of Aloeus, and many other sinners. Still more sinners are contained inside Tartarus, with punishments similar to those of Greek myth.

Tartarus occurs in the Septuagint translation of Job into Koine Greek, and in Hellenistic Jewish literature from the Greek text of 1 Enoch, dated to 400–200 BC. This states that God placed the archangel Uriel "in charge of the world and of Tartarus" (20:2). Tartarus is generally understood to be the place where 200 fallen Watchers (angels) are imprisoned.[22]

In Hypostasis of the Archons (also translated 'Reality of the Rulers'), an apocryphal gnostic treatise dated before 350 AD, Tartarus makes a brief appearance when Zōē (life), the daughter of Sophia (wisdom) casts Ialdabaōth (demiurge) down to the bottom of the abyss of Tartarus.[23]

Tartarus also appears in sections of the Jewish Sibylline Oracles. E.g. Sib. Or. 4:186.

In the New Testament, the noun Tartarus does not occur but tartaroo (ταρταρόω, "throw to Tartarus"), a shortened form of the classical Greek verb kata-tartaroo ("throw down to Tartarus"), does appear in 2 Peter 2:4. Liddell–Scott provides other sources for the shortened form of this verb, including Acusilaus (5th century BC), Joannes Laurentius Lydus (4th century AD) and the Scholiast on Aeschylus' Eumenides, who cites Pindar relating how the earth tried to tartaro "cast down" Apollo after he overcame the Python.[24] In classical texts, the longer form kata-tartaroo is often related to the throwing of the Titans down to Tartarus.[25]

The ESV is one of several English versions that gives the Greek reading Tartarus as a footnote:

Adam Clarke reasoned that Peter's use of language relating to the Titans was an indication that the ancient Greeks had heard of a Biblical punishment of fallen angels.[26] Some Evangelical Christian commentaries distinguish Tartarus as a place for wicked angels and Gehenna as a place for wicked humans on the basis of this verse.[27] Other Evangelical commentaries, in reconciling that some fallen angels are chained in Tartarus, yet some not, attempt to distinguish between one type of fallen angel and another.[28]