From Wikipedia, the free encyclopedia
(Redirected from Knock on wood)
Jump to navigation Jump to search
"Knock on wood" redirects here. For other uses, see Knock on Wood (disambiguation). 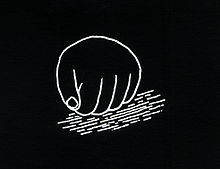 Knocking on wood, also touch wood, is an apotropaic tradition of literally touching, tapping, or knocking on wood, or merely stating that one is doing or intending to do so, in order to avoid "tempting fate" after making a favorable prediction or boast, or a declaration concerning one's own death or another unfavorable situation. In some versions of the tradition, only one person, the speaker, is meant to "knock on wood".[citation needed]

The origin of the custom may be in Celtic or German folklore, wherein supernatural beings are thought to live in trees, and can be invoked for protection. One explanation states that the tradition derived from the Pagans who thought that trees were the homes of fairies, spirits, dryads and many other mystical creatures.[1] In these instances, people might knock on or touch wood to request good luck, or to distract spirits with evil intentions. When in need of a favour or some good luck, one politely mentioned this wish to a tree and then touched the bark, representing the first "knock". The second "knock" was to say "thank you". The knocking was also supposed to prevent evil spirits from hearing your speech and as such stop them from interfering. Alternatively, some traditions have it that by knocking upon wood, you would awaken and release the benevolent wood fairies that dwelt there.[citation needed]

Another explanation links the practice to wooden crucifixes.[1] A more modern theory from a folklore researcher suggests it derives from a form of tag called "Tiggy Touchwood" in which players are safe from being tagged if they are touching wood.[1]

Similar traditions across the world[edit]

Knocking on wood in the Oval Office