Mattathias ben Johanan (Hebrew: מַתִּתְיָהוּ הַכֹּהֵן בֶּן יוֹחָנָן‎, Matiṯyāhu haKohēn ben Yōḥānān) (died 165 BCE)[1] was a Kohen (Jewish priest) whose role in the religion-driven Maccabean Revolt against the Greek Seleucid Empire is related in the Books of the Maccabees. Mattathias is accorded a central role in the story of Hanukkah and, as a result, is named in the Al HaNissim prayer Jews add to the Birkat Hamazon (grace after meals) and the Amidah during the festival's eight days. 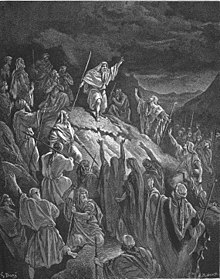 The father of Judas Maccabeus, Eleazar Avaran, Simon Thassi, John Gaddi, and Jonathan Apphus, Mattathias was from a rural priestly family from Modi'in. Like all fit priests, he served in the Temple in Jerusalem. He was a son of Johanan, grandson of Simeon, the Hasmonean, and great-grandson of Asmon or Hasmonaeus, a Levite of the lineage of Joarib for being the fifth grandson of Idaiah, son of Joarib and grandson of Jachin, in turn a descendant of Phinehas, third High Priest of Israel, according to Mattathias' own words in 1 Maccabees.[2][3]

After the Seleucid persecutions began, Mattathias returned to Modi'in. In 167 BCE, when asked by a Seleucid Greek government representative under emperor Antiochus IV Epiphanes to offer sacrifice to the Greek gods, he not only refused to do so, but slew with his own hand the Jew who had stepped forward to do so. He then killed the government official that required the act.[4]

Let everyone who has zeal for the Law and who stands by the covenant follow me!

— Mattathias, after assassinating the Greek government official, who was forcing him to sacrifice, Septuagint, 1st Maccabees 2:27.

Upon the edict for his arrest, he took refuge in the wilderness of Judea with his five sons and called upon all Jews to follow him. Many eventually responded to his call. Mattathias then disappears from historical record, he probably died c. 166 BC. 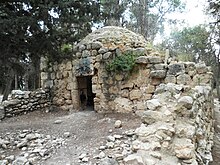 This was the first step in the Maccabean Revolt, the result of which was Jewish independence, which had not been enjoyed for more than 400 years. The events of the war of the Maccabees form the basis for the holiday of Hanukkah, which is celebrated by Jews on the 25th of Kislev (on the Hebrew calendar, corresponding to mid-November to late December in the Gregorian calendar).

The story of the Maccabees can be found in the deuterocanonical books of 1 Maccabees and 2 Maccabees, in Josephus, and in Talmudic references (Shabbat 21b, Shabbat 23a - related to the candles). He is also made reference to in chapter 28 of 1 Meqabyan, a book considered canonical in the Ethiopian Orthodox Tewahedo Church.[5]

The "Al HaNisim" prayer, added into the Amidah and Birkat Hamazon on Chanukah, refers to the story of the Maccabees and to Mattathias by name.