Simon Thassi (Hebrew: שמעון התסי Šiməōn HaṮasī; died 135 BCE)[1] was the second son of Mattathias and thus a member of the Hasmonean family. The name "Thassi" has a connotation of "the Wise", a title that can also mean "the Director", "the Guide", "the Man of Counsel", and "the Zealous".[2][3] 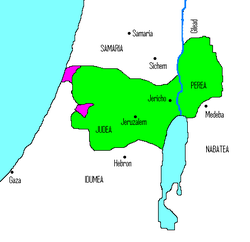 Simon took a prominent part in the Jewish revolt against the Seleucid Empire led by his brothers, Judas Maccabaeus and Jonathan Apphus. The successes of the Jews rendered it expedient for the Seleucid leaders in Syria to show them special favour. Therefore, Antiochus VI appointed Simon strategus, or military commander, of the coastal region stretching from the Ladder of Tyre to Egypt. As strategus, Simon conquered the cities of Beth-zur and Joppa, garrisoning them with Jewish troops and built the fortress of Adida.[4]

After the capture of Jonathan, Simon was elected leader by the people, assembled at Jerusalem. He at once completed the fortification of the capital, and made Joppa secure. (1 Macc. 13:8-13:11[5]); (Josephus, Antiquities Bk13 Ch6:4[6])

At Hadid he blocked the advance of the Seleucid general, Diodotus Tryphon, who was attempting to enter the country and seize the throne of Syria. Since Tryphon could gain nothing by force, he demanded a ransom for Jonathan and the surrender of Jonathan's sons as hostages. Although Simon was fully aware that Tryphon would deceive him, he acceded to both demands, so that the people might see that he had done everything possible for his brother. Jonathan was nevertheless treacherously assassinated, and the hostages were not returned. Simon thus became the sole leader of the people.[4]

As an opponent of Diodotus Tryphon, Simon decided to side with the Seleucid king, Demetrius II, to whom he sent a deputation requesting freedom from taxation for the country. The fact that his request was granted implied the recognition of the political independence of Judea.[4]

He became the first prince of the Hebrew Hasmonean Dynasty. He reigned from 142 to 135 BCE.

The Hasmonean Dynasty was founded by a resolution, adopted in 141 BCE, at a large assembly "of the priests and the people and of the elders of the land, to the effect that Simon should be their leader and high priest forever, until there should arise a faithful prophet".(1 Macc. 14:41[7]) Recognition of the new dynasty by the Roman Republic was accorded by the Senate about 139 BCE, when the delegation representing Simon was in Rome. Simon made the Jewish people semi-independent of the Seleucid Empire.

In February 135 BCE, he was assassinated at the instigation of his son-in-law and rival Ptolemy, son of Abubus.[1] Simon was followed by his third son, John Hyrcanus, whose two brothers, Mattathias and Judah, had been murdered, together with their father.