From Wikipedia, the free encyclopedia
Jump to navigation Jump to search
Hypothetical reconstructed language ancestral to the historical Semitic languages

Proto-Semitic is a hypothetical reconstructed language ancestral to the historical Semitic languages. A 2009 study proposes that it was spoken from about 3750 BCE in the Levant during the Early Bronze Age.[1] There is no consensus regarding the location of the Proto-Semitic Urheimat; scholars hypothesize that it may have originated in the Arabian Peninsula, the Levant, the Sahara, or the Horn of Africa.

The Semitic language family is considered part of the broader macro-family of Afroasiatic languages.

The earliest attestations of a Semitic language are in Akkadian, dating to around the 23rd century BC (see Sargon of Akkad) and the Eblaite language, but earlier evidence of Akkadian comes from personal names in Sumerian texts around the 28th century BC.[citation needed] Researchers also claim to have discovered Canaanite snake spells: "The passages date from between 2400 to 3000 BC and appear to be written in Proto-Canaanite, a direct ancestor of Biblical Hebrew."[2][better source needed]

The previously popular hypothesis of an Arabian urheimat has been largely abandoned, since the region could not have supported massive waves of emigration before the domestication of camels in the second millennium BC.[3]

There is also evidence that Mesopotamia (and adjoining areas of modern Syria) were originally inhabited by a non-Semitic population. 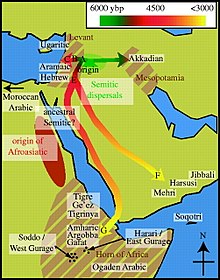 Map of Semitic languages and statistically inferred dispersals. One hypothesized location of the divergence of ancestral Semitic from Afroasiatic between the African coast of the Red Sea and the Near East is also indicated.

A Bayesian analysis performed in 2009 suggests an origin for all known Semitic languages in the Levant around 3750 BCE, with a later single introduction from South Arabia into the Horn of Africa around 800 BCE. This statistical analysis could not, however, estimate when or where the ancestor of all Semitic languages diverged from Afroasiatic.[1] It thus neither contradicts nor confirms the hypothesis that the divergence of ancestral Semitic from Afroasiatic occurred in Africa.

Christopher Ehret has hypothesized that genetic analyses (specifically those of Y chromosome phylogeography and TaqI 49a,f haplotypes) shows populations of proto-Semitic speakers may have moved from the Horn of Africa or southeastern Sahara northwards to the Nile Valley, northwest Africa, the Levant, and Aegean.[4]

Some geneticists and archaeologists have argued for a back-migration of proto-Afroasiatic speakers from Western Asia to Africa as early as the 10th millennium BC. They suggest the Natufian culture might have spoken a proto-Afroasiatic language just prior to its disintegration into sub-languages.[5][6] The hypothesis is supported by the Afroasiatic terms for early livestock and crops in both Anatolia and Iran.[7]

Edward Lipiński believes that support for an African origin is provided by what he describes as a possible relationship between a pre-Semitic Afroasiatic language and the Niger–Congo languages, whose urheimat probably lies in Nigeria–Cameroon.[8] In support of this hypothesis, Lipiński points out that Proto-Semitic:

A Neolithic culture in the Sahara possibly related to Proto-Semitic collapsed due to desertification and climate change around 3500 BC, according to Lipiński – a fact attested by evidence such as rock art. This may have forced Proto-Semitic speakers to emigrate en masse through the Nile Delta to Western Asia. They were probably responsible for the collapse of the Ghassulian culture in Palestine around 3300 BC.[9] Another indication of the arrival of the proto-Semitic culture is the appearance of tumuli in 4th and 3rd millennium BC Palestine, which were typical characteristic of Neolithic Maghreb, especially in Algeria.[9] It is possible that at this point, the ancestors of the speakers of Elamite moved towards Iran, although the inclusion of Elamite in Afroasiatic is only contemplated by a tiny minority.[10] The earliest wave of Semitic speakers entered the Fertile Crescent via Palestine and Syria and eventually founded the Akkadian Empire. Their relatives, the Amorites, followed them and settled Syria before 2500 BC.[9] The collapse of the Bronze Age in Palestine led the southern Semites southwards, where they reached the highlands of Yemen after 20th century BC. Those crossed back to the Horn of Africa between 1500–500 BC.[9]

The Proto-Semitic consonant system is based on triads of related voiceless, voiced and "emphatic" consonants. Five such triads are reconstructed in Proto-Semitic:

The probable phonetic realization of most consonants is straightforward and is indicated in the table with the IPA. Two subsets of consonants, however, deserve further comment.

The sounds notated here as "emphatic" occur in nearly all Semitic languages as well as in most other Afroasiatic languages, and they are generally reconstructed as glottalized in Proto-Semitic.[14][15][nb 1] Thus, *ṭ, for example, represents [tʼ]. (See below for the fricatives/affricates).

In modern Semitic languages, emphatics are variously realized as pharyngealized (Arabic, Aramaic, Tiberian Hebrew (such as [tˤ]), glottalized (Ethiopian Semitic languages, Modern South Arabian languages such as [tʼ]), or as unaspirated (Turoyo of Tur-Abdin such as [t˭]);[16] Ashkenazi Hebrew and Maltese are exceptions and emphatics merge into plain consonants in various ways under the influence of Indo-European languages (Italian/Sicilian for Maltese, German/Yiddish for Hebrew).

An emphatic labial *ṗ occurs in some Semitic languages, but it is unclear whether it was a phoneme in Proto-Semitic.

The precise sound of the Proto-Semitic fricatives, notably of *š, *ś, *s and *ṣ, remains a perplexing problem, and there are various systems of notation to describe them. The notation given here is traditional and is based on their pronunciation in Hebrew, which has traditionally been extrapolated to Proto-Semitic. The notation *s₁, *s₂, *s₃ is found primarily in the literature on Old South Arabian, but more recently, it has been used by some authors to discuss Proto-Semitic to express a noncommittal view of the pronunciation of the sounds. However, the older transcription remains predominant in most literature, often even among scholars who either disagree with the traditional interpretation or remain noncommittal.[19]

The traditional view, as expressed in the conventional transcription and still maintained by some of the authors in the field[20][21][22] is that *š was a voiceless postalveolar fricative ([ʃ]), *s was a voiceless alveolar sibilant ([s]) and *ś was a voiceless alveolar lateral fricative ([ɬ]). Accordingly, *ṣ is seen as an emphatic version of *s ([sʼ]) *z as a voiced version of it ([z]) and *ṣ́ as an emphatic version of *ś ([ɬʼ]). The reconstruction of *ś ṣ́ as lateral fricatives (or affricates) is certain although few modern languages preserve the sounds. The pronunciation of *ś ṣ́ as [ɬ ɬʼ] is still maintained in the Modern South Arabian languages (such as Mehri), and evidence of a former lateral pronunciation is evident in a number of other languages. For example, Biblical Hebrew baśam was borrowed into Ancient Greek as balsamon (hence English "balsam"), and the 8th-century Arab grammarian Sibawayh explicitly described the Arabic descendant of *ṣ́, now pronounced [dˤ] in the standard pronunciation or [ðˤ] in Bedouin-influenced dialects, as a pharyngealized voiced lateral fricative [ɮˤ].[23][24] (Compare Spanish alcalde, from Andalusian Arabic اَلْقَاضِي al-qāḍī "judge".)

The primary disagreements concern whether the sounds were actually fricatives in Proto-Semitic or whether some were affricates and whether the sound designated *š was pronounced [ʃ] (or similar) in Proto-Semitic, as the traditional view posits, or had the value of [s]. The issue of the nature of the "emphatic" consonants, discussed above, is partly related (but partly orthogonal) to the issues here as well.

With respect to the traditional view, there are two dimensions of "minimal" and "maximal" modifications made:

Affricates in Proto-Semitic were proposed early on but met little acceptance until the work of Alice Faber (1981)[citation needed] who challenged the older approach. The Semitic languages that have survived often have fricatives for these consonants. However, Ethiopic languages and Modern Hebrew, in many reading traditions, have an affricate for *ṣ.[26]

The evidence for the various affricate interpretations of the sibilants is direct evidence from transcriptions and structural evidence. However, the evidence for the "maximal extension" positions that extend affricate interpretations to non-sibilant "fricatives" is largely structural because of both the relative rarity of the interdentals and lateral obstruents among the attested Semitic language and the even-greater rarity of such sounds among the various languages in which Semitic words were transcribed. As a result, even when the sounds were transcribed, the resulting transcriptions may be difficult to interpret clearly.

The narrowest affricate view (only *ṣ was an affricate [t͡sʼ]) is the most accepted one.[27][28] The affricate pronunciation is directly attested in the modern Ethiopic languages and Modern Hebrew, as mentioned above, but also in ancient transcriptions of numerous Semitic languages in various other languages:

The "maximal affricate" view, applied only to sibilants, also has transcriptional evidence. According to Kogan, the affricate interpretation of Akkadian s z ṣ is generally accepted.[31]

Evidence for *š as /s/ also exists but is somewhat less clear. It has been suggested that it is cross-linguistically rare for languages with a single sibilant fricative to have [ʃ] as the sound and that [s] is more likely.[31] Similarly, the use of Phoenician 𐤔 *š, as the source of Greek Σ s, seems easiest to explain if the phoneme had the sound of [s] at the time. The occurrence of [ʃ] for *š in a number of separate modern Semitic languages (such as Neo-Aramaic, Modern South Arabian, most Biblical Hebrew reading traditions) and Old Babylonian Akkadian is then suggested to result from a push-type chain shift, and the change from [t͡s] to [s] "pushes" [s] out of the way to [ʃ] in the languages in question, and a merger of the two to [s] occurs in various other languages such as Arabic and Ethiopian Semitic.

On the other hand, it has been suggested that the initial merged s in Arabic was actually a "hissing-hushing sibilant",[38] presumably something like [ɕ] (or a "retracted sibilant"), which did not become [s] until later. That would suggest a value closer to [ɕ] (or a "retracted sibilant") or [ʃ] for Proto-Semitic *š since [t͡s] and [s] would almost certainly merge directly to [s]. Furthermore, there is various evidence to suggest that the sound [ʃ] for *š existed while *s was still [ts].[39] Examples are the Southern Old Babylonian form of Akkadian, which evidently had [ʃ] along with [t͡s] as well as Egyptian transcriptions of early Canaanite words in which *š s are rendered as š ṯ. (ṯ is an affricate [t͡ʃ] and the consensus interpretation of š is [ʃ], as in Modern Coptic.[39])

Diem (1974) suggested that the Canaanite sound change of *θ → *š would be more natural if *š was [s] than if it was [ʃ]. However, Kogan argues that, because *s was [ts] at the time, the change from *θ to *š is the most likely merger, regardless of the exact pronunciation of *š while the shift was underway.[40]

Evidence for the affricate nature of the non-sibilants is based mostly on internal considerations. Ejective fricatives are quite rare cross-linguistically, and when a language has such sounds, it nearly always has [sʼ] so if *ṣ was actually affricate [tsʼ], it would be extremely unusual if *θ̣ ṣ́ was fricative [θʼ ɬʼ] rather than affricate [t͡θʼ t͡ɬʼ]. According to Rodinson (1981) and Weninger (1998), the Greek placename Mátlia, with tl used to render Ge'ez ḍ (Proto-Semitic *ṣ́), is "clear proof" that this sound was affricated in Ge'ez and quite possibly in Proto-Semitic as well.[41]

The evidence for the most maximal interpretation, with all the interdentals and lateral obstruents being affricates, appears to be mostly structural: the system would be more symmetric if reconstructed that way.

The shift of *š to h occurred in most Semitic languages (other than Akkadian, Minaian, Qatabanian) in grammatical and pronominal morphemes, and it is unclear whether reduction of *š began in a daughter proto-language or in Proto-Semitic itself. Some thus suggest that weakened *š̠ may have been a separate phoneme in Proto-Semitic.[42]

Correspondence of sounds with daughter languages[edit]

See Semitic languages#Phonology for a fuller discussion of the outcomes of the Proto-Semitic sounds in the various daughter languages.

Correspondence of sounds with other Afroasiatic languages[edit]