From Wikipedia, the free encyclopedia
Jump to navigation Jump to search
Reigning centre of God in the Abrahamic religions

The Throne of God from the first Russian engraved Bible, 1696.

The Throne of God is the reigning centre of God in the Abrahamic religions: primarily Judaism, Christianity, and Islam. The throne is said by various holy books to reside beyond the Seventh Heaven and is called Araboth (Hebrew: עֲרָבוֹת‎ ‘ărāḇōṯ) in Judaism,[1] and al-'Arsh in Islam. Many in the Christian religion consider the ceremonial chair as symbolizing or representing an allegory of the holy Throne of God.

Micaiah (1 Kings 22:19), Isaiah (Isaiah 6), Ezekiel (Ezekiel 1)[2] and Daniel (Daniel 7:9) all speak of God's throne although some philosophers, such as Saʿadiah Gaon and Maimonides, interpreted such mention of a "throne" as allegory.[3]

Micaiah's extended prophecy (1 Kings 22:19) is the first detailed depiction of a heavenly throne room in Judaism.

Zechariah 3 depicts a vision of the heavenly throne room where Satan and the Angel of the Lord contend over Joshua the High Priest in the time of his grandson Eliashib the High Priest. Many Christians consider this a literal event[citation needed], others such as Goulder (1998) view the vision as symbolic of crisis on earth, such as opposition from Sanballat the Horonite.[4]

The concept of a heavenly throne occurs in three Dead Sea Scroll texts. Later speculation on the throne of God became a theme of Merkabah mysticism.[5] 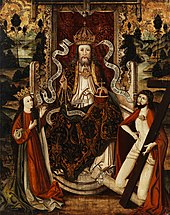 The Book of Revelation describes the Seven Spirits of God which surround the throne, and John wishes his readers in the Seven Asian churches to be blessed with grace from God, from the seven who are before God's throne, and from Jesus Christ in Heaven. John states that in front of the throne there appears to be "a sea of glass, clear as crystal", and that the throne is surrounded by a lion, an ox, a man, and a flying eagle; each with six wings and covered with eyes, who constantly cry "Holy, holy, holy is the Lord God Almighty, who was, and is, and is to come" repeatedly. It is also said that "out of the throne proceeded lightnings and thunderings and voices".[9]

Isaiah In Isaiah 6, Isaiah sees the Lord sitting upon a throne, high and lifted up, and His train (robe) filled the temple. Above the throne stood the Seraphims (angelic beings), and each one had 6 wings. With two wings they covered their face, with two they covered their feet, and with two they flew. And the Seraphims were calling out to one another, "Holy, Holy, Holy, is the Lord of Hosts" (Some translations title Him, 'Lord of heavens armies', or 'Lord Almighty'). Their voices shook the temple to its foundations, and the entire building was filled with smoke. 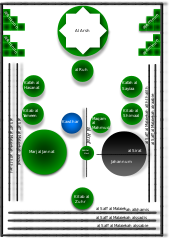 Diagram of "Plain of Assembly"(Ard al-Hashr) on the Day of Judgment, from autograph manuscript of Futuhat al-Makkiyya by Sufi mystic and philosopher Ibn Arabi, ca. 1238. Shown are the 'Arsh (Throne of God), pulpits for the righteous (al-Aminun), seven rows of angels, Gabriel (al-Ruh), A'raf (the Barrier), the Pond of Abundance, al-Maqam al-Mahmud (the Praiseworthy Station; where the prophet Muhammad will stand to intercede for the faithful), Mizan (the Scale), As-Sirāt (the Bridge), Jahannam (Hell) and Marj al-Jannat (Meadow of Paradise).[10]

In Islamic theology, the Throne (Arabic: العرش‎ Al-ʿArsh) is one of the greatest things ever created by God.[11] Some Muslims including Salafis believe God created the throne both as a sign of his power and place of dwelling,[12][13][14] some Muslims including most of the Sufis believe it as a sign of his power and not as place of dwelling,[15] and some Including Ashari and Maturidi believe it as a metaphor of the greatness of God.[16][17][18]

Indeed, your Lord is Allah, who created the heavens and the earth in six days and then established Himself above the Throne (Arsh), arranging the matter [of His creation]. There is no intercessor except after His permission. That is Allah, your Lord, so worship Him. Then will you not remember? - Yunus 10:3

And it is He who created the heavens and the earth in six days - and His Throne had been upon water - that He might test you as to which of you is best in deed. But if you say, "Indeed, you are resurrected after death," those who disbelieve will surely say, "This is not but obvious magic." - Hud 11:7

So Exalted be Allah, the True King - None has the right to be worshipped but He - Lord of the Supreme Throne! - al-Mu’minoon 23:116

The Quran depicts the angels as carrying the throne of God and praising his glory, similar to Old Testament images.

...those who bear the Throne, and all who are round about it, sing the praises of their Lord and believe in Him and ask forgiveness for those who believe. - Quran 40:7

...and you shall see the angels going round about the Throne glorifying the praise of their Lord; and judgment shall be given between them with justice, and it shall be said: all praise is due to God, the Lord of the Worlds. - Quran 39:75

The Ayat al-Kursi (often glossed as "Verse of the footstool"), is a verse from Al-Baqara, the second sura of the Quran, and is regarded[by whom?] as the book's greatest verse. It references the Throne, and also God's greatest name, Al-Hayy Al-Qayyoom ("The Living, the Eternal").[19] Scholars of hadith have stated that Muhammad said the reward for reciting this verse after every prayer is Paradise,[20] and that reciting it is a protection from the devil.[21]

Prophetic hadith also establish that The Throne is above the roof of Al-Firdaus Al-'Ala, the highest level of Paradise where God's closest and most beloved servants in the hereafter shall dwell.[22]