From Wikipedia, the free encyclopedia
Jump to navigation Jump to search
Seven levels or divisions of Heaven in religious or mythological cosmology

In religious or mythological cosmology, the seven heavens refer to seven levels or divisions of Heaven. The concept, derived from ancient Mesopotamian religions, can be found in the Abrahamic religions such as Judaism, Christianity, and Islam; a similar concept is also found in some Indian religions such as Hinduism.[1] Some of these traditions, including Jainism, also have a concept of seven earths or seven underworlds both with the metaphysical realms of deities and with observed celestial bodies such as the classical planets and fixed stars.[2] The number seven corresponds to the seven classical planets known to antiquity. Ancient observers noticed that these objects (Mercury, Venus, the Moon, the Sun, Mars, Jupiter, and Saturn) moved at different paces in the sky both from each other and from the fixed stars beyond them. Unlike comets, which appeared in the sky with no warning, they did move in regular patterns that could be predicted.[3] They also observed that objects in the sky influenced objects on earth, as when movements of the sun affect the behavior of plants or movements of the moon affect ocean tides. Others believe the seven heavens are located to seven stars of the Big Dipper, according to ancient western astrology.[citation needed]

The concept of seven heavens as developed in ancient Mesopotamia symbolised both physical and metaphysical concepts.[4] In the Sumerian language, the words for heaven (or sky) and earth are An and Ki.[5] The ancient Mesopotamians regarded the sky as a series of domes (usually three, but sometimes seven) covering the flat earth.[6]:180 Each dome was made of a different kind of precious stone.[6]:203 The lowest dome of heaven was made of jasper and was the home of the stars.[7] The middle dome of heaven was made of saggilmut stone and was the abode of the Igigi.[7] The highest and outermost dome of heaven was made of luludānītu stone and was personified as An, the god of the sky.[8][7] The celestial bodies were equated with specific deities as well.[6]:203 The planet Venus was believed to be Inanna, the goddess of love, sex, and war.[9]:108–109[6]:203 The sun was her brother Utu, the god of justice,[6]:203 and the moon was their father Nanna.[6]:203 Ordinary mortals could not go to heaven because it was the abode of the gods alone.[10] Instead, after a person died, his or her soul went to Kur (later known as Irkalla), a dark shadowy underworld, located deep below the surface of the earth.[10][11] Sumerian incantations of the late second millennium BCE make references to seven heavens and seven earths. One such incantation is: "an-imin-bi ki-imin-bi" (the heavens are seven, the earths are seven.)[2][12]

The understanding that the heavens can influence things on earth lent heavenly, magical properties to the number seven itself, as in stories of seven demons, seven churches, seven spirits, or seven thrones. The number seven appears frequently in Babylonian magical rituals.[13] The seven Jewish and the seven Islamic heavens may have had their origin in Babylonian astronomy.[2]

In general, heaven is not a place for humans in Mesopotamian religion. As Gilgamesh says to his friend Enkidu, in the Epic of Gilgamesh: "Who can go up to heaven, my friend? Only the gods dwell with Shamash forever". Along with the idea of seven heavens, the idea of three heavens was also common in ancient Mesopotamia.[14]

According to the Talmud, the universe is made of seven heavens (Shamayim)[15]

The Jewish Merkavah and Hekhalot literature was devoted to discussing the details of these heavens, sometimes in connection with traditions relating to Enoch, such as the Third Book of Enoch.[16]

The Second Book of Enoch, also written in the first century CE, describes the mystical ascent of the patriarch Enoch through a hierarchy of Ten Heavens. Enoch passes through the Garden of Eden in the Third Heaven on his way to meet the Lord face-to-face in the Tenth (chapter 22). Along the way he encounters vividly described populations of angels who torment wrongdoers; he sees homes, olive oil, and flowers.[17]

The book's depiction of ten heavens represented an expansion of the ancient seven-heaven model. This expanded cosmology was developed further in medieval Christianity.

An explicit reference to the Third Heaven appears in the Christian New Testament canon. A Pauline epistle, penned in Macedonia around 55CE, describes this mystical experience:

The description is usually taken as an oblique reference by the author to himself. The passage appears to reflect first-century beliefs among Jews and Christians that the realm of Paradise existed in a different heaven than the highest one—an impression that may find support in the original Greek wording (closer to "caught away" than "caught up").[18]

Over the course of the Middle Ages, Christian thinkers expanded the ancient Mesopotamian seven-heaven model into a system of ten heavens. This cosmology, taught in the first European universities by the Scholastics, reached its supreme literary expression in The Divine Comedy by Dante Aligheri.

"Heaven in Islam" redirects here. For the final abode of the righteous in Islam, see Jannah. 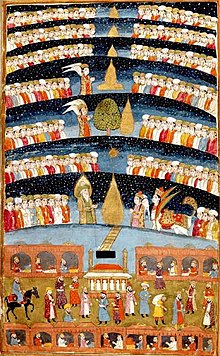 A Persian miniature from The History of Mohammed depicting seven heavens.

The Quran and Hadith frequently mention the existence of seven samāwāt (سماوات), the plural of samāʾ (سماء), meaning 'heaven, sky, celestial sphere', and cognate with Hebrew shamāyim (שמים). Some of the verses in the Quran mentioning the samaawat [19] are Quran 41:12, Quran 65:12 and Quran 71:15.

There are two interpretations of using the number "seven". One viewpoint is that the number "seven" here simply means "many" and is not to be taken literally (the number is often used to imply that in the Arabic language).[20] But many other commentators use the number literally.

One interpretation of "heavens" is that all the stars and galaxies (including the Milky Way) are all part of the "first heaven", and "beyond that six still bigger worlds are there," which have yet to be discovered by scientists.[20]

In other sources, the concept is presented in metaphorical terms. Each of the seven heavens is depicted as being composed of a different material, and Islamic prophets are resident in each. 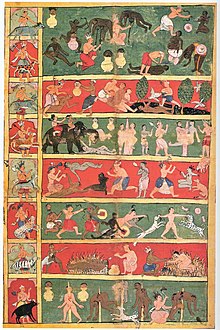 A cloth painting depicting seven levels of Jain hell. Left panel depicts the demi-god and his animal vehicle presiding over each hell.