From Wikipedia, the free encyclopedia
Jump to navigation Jump to search
Biblical figure prior to Noah's flood

listen), EE-nuhk)[a] is a biblical figure prior to Noah's flood and the son of Jared and father of Methuselah. He was of the Antediluvian period in the Hebrew Bible. This Enoch is not to be confused with Cain's son Enoch (Genesis 4:17).

The text of the Book of Genesis says Enoch lived 365 years before he was taken by God. The text reads that Enoch "walked with God: and he was no more; for God took him" (Gen 5:21–24), which interpreted as Enoch's entering Heaven alive in some Jewish and Christian traditions.

Enoch is the subject of many Jewish and Christian traditions. He was considered the author of the Book of Enoch[3] and also called Enoch the scribe of judgment.[4] The New Testament has three references to Enoch from the lineage of Seth (Luke 3:37, Hebrews 11:5, Jude 1:14–15).

Enoch in the Book of Genesis[edit] 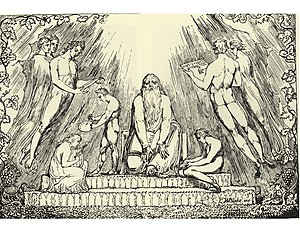 Enoch appears in the Book of Genesis of the Pentateuch as the seventh of the ten pre-Deluge Patriarchs. Genesis recounts that each of the pre-Flood Patriarchs lived for several centuries. Genesis 5 provides a genealogy of these ten figures (from Adam to Noah), providing the age at which each fathered the next, and the age of each figure at death. Enoch is considered by many to be the exception, who is said to "not see death" (Hebrews 11:5). Furthermore, Genesis 5:22–29 states that Enoch lived 365 years, which is shorter than his peers, who are all recorded as dying at over 700 years of age. The brief account of Enoch in Genesis 5 ends with the cryptic note that "he was not; for God took him".[5]

These recount how Enoch was taken up to Heaven and was appointed guardian of all the celestial treasures, chief of the archangels, and the immediate attendant on the Throne of God. He was subsequently taught all secrets and mysteries and, with all the angels at his back, fulfils of his own accord whatever comes out of the mouth of God, executing His decrees. Much esoteric literature like the 3 Enoch identifies Enoch as the Metatron, the angel which communicates God's word. In consequence, Enoch was seen, by this literature, and the Rabbinic kabbalah of Jewish mysticism, as having been the one which communicated God's revelation to Moses, in particular, the dictator of the Book of Jubilees.

Enoch in Book of Giants[edit]

The Book of Giants is a Jewish pseudepigraphal work from the third century BC and resembles the Book of Enoch. Fragments from at least six and as many as eleven copies were found among the Dead Sea Scrolls collections.[8]

The third-century BC translators who produced the Septuagint in Koine Greek rendered the phrase "God took him" with the Greek verb metatithemi (μετατίθημι)[9] meaning moving from one place to another.[10] Sirach 44:16, from about the same period, states that "Enoch pleased God and was translated into paradise that he may give repentance to the nations." The Greek word used here for paradise, paradeisos (παράδεισος), was derived from an ancient Persian word meaning "enclosed garden", and was used in the Septuagint to describe the garden of Eden. Later, however, the term became synonymous for heaven, as is the case here.[11]

In classical Rabbinical literature, there are various views of Enoch. One view regarding Enoch that was found in the Targum Pseudo-Jonathan, which thought of Enoch as a pious man, taken to Heaven, and receiving the title of Safra rabba (Great scribe). After Christendom was completely separated from Judaism, this view became the prevailing rabbinical idea of Enoch's character and exaltation.[12]

According to Rashi[13] [from Genesis Rabbah[14]], "Enoch was a righteous man, but he could easily be swayed to return to do evil. Therefore, the Holy One, blessed be He, hastened and took him away and caused him to die before his time. For this reason, Scripture changed [the wording] in [the account of] his demise and wrote, 'and he was no longer' in the world to complete his years."

Among the minor Midrashim, esoteric attributes of Enoch are expanded upon. In the Sefer Hekalot, Rabbi Ishmael is described as having visited the Seventh Heaven, where he met Enoch, who claims that earth had, in his time, been corrupted by the demons Shammazai, and Azazel, and so Enoch was taken to Heaven to prove that God was not cruel.[12] Similar traditions are recorded in Sirach. Later elaborations of this interpretation treated Enoch as having been a pious ascetic, who, called to mix with others, preached repentance, and gathered (despite the small number of people on Earth) a vast collection of disciples, to the extent that he was proclaimed king. Under his wisdom, peace is said to have reigned on earth, to the extent that he is summoned to Heaven to rule over the sons of God. 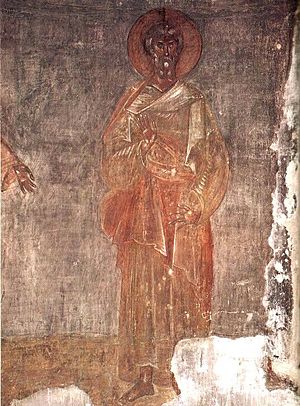 Patriarch Enoch, a fresco by Theophanes the Greek, 14th century.

The introductory phrase "Enoch, the Seventh from Adam" is also found in 1 Enoch (1 En. 60:8), though not in the Old Testament.[22] In the New Testament this Enoch prophesies "to"[b] ungodly men, that God shall come with His holy ones to judge and convict them (Jude 1:14–15). 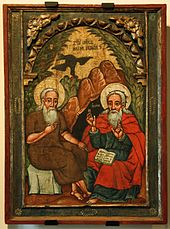 Among the Latter Day Saint movement and particularly in The Church of Jesus Christ of Latter-day Saints, Enoch is viewed as having founded an exceptionally righteous city, named Zion, in the midst of an otherwise wicked world. This view is encountered in the standard works, the Pearl of Great Price and the Doctrine and Covenants, which states that not only Enoch, but the entire peoples of the city of Zion, were taken off this earth without death, because of their piety. (Zion is defined as "the pure in heart" and this city of Zion will return to the earth at the Second Coming of Jesus.) The Doctrine and Covenants further states that Enoch prophesied that one of his descendants, Noah, and his family, would survive a Great Flood and thus carry on the human race and preserve the Scripture. The Book of Moses in the Pearl of Great Price includes chapters that give an account of Enoch's preaching, visions, and conversations with God. They provide details concerning the wars, violence and natural disasters in Enoch's day, but also reference the miracles performed by Enoch.

The Book of Moses remarkably parallels at many points the accounts of Enoch in other Enochic literature, particularly as found in the Ethiopic 1 Enoch, the Slavonic 2 Enoch, the Hebrew Life of Enoch (3 Enoch), the pseudepigraphic Book of Jubilees, and the Book of Jasher, which itself closely parallels with both the Slavonic and Hebrew Enoch.[26] But it is within the corpus of fragmentary documents discovered at Qumran beginning in 1948 — collectively called 'the Book of Giants' — that the closest alignment is found with Enoch's story as told in the Book of Moses and other Enochic literature.[27]

The Book of Moses is itself an excerpt from Joseph Smith's translation of the Bible, which is published in full, complete with these chapters concerning Enoch, by Community of Christ, in the Joseph Smith Translation of the Bible, where it appears as part of the Book of Genesis. D&C 104:24 (CofC) / 107:48–49 (LDS) states that Adam ordained Enoch to the higher priesthood (now called the Melchizedek, after the great king and high priest) at age 25, that he was 65 when Adam blessed him, and that he lived for an additional 365 years until he and his city were translated, making Enoch 430 years old at the time that "he was not, for God took him" (Genesis 5:24).

In Islam, Enoch (Arabic: أَخْنُوخ‎, romanized: ʼAkhnūkh [commonly in Islamic literature]: ʼIdrīs إِِدْرِيس)) is identified with Idris, as for example by the History of Al-Tabari interpretation and the Meadows of Gold.[28] The Quran contains two references to Idris; in Surah Al-Anbiya (The Prophets) verse number 85, and in Surah Maryam (Mary) verses 56–57:

Idris is closely linked in Muslim tradition with the origin of writing and other technical arts of civilization,[29] including the study of astronomical phenomena, both of which Enoch is credited with in the Testament of Abraham.[29] Nonetheless, although some Muslims view Enoch and Idris as the same prophet while others do not, many Muslims still honor Enoch as one of the earliest prophets, regardless of which view they hold.[30]