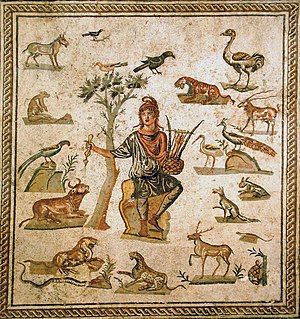 Orphic mosaics were found in many late-Roman villas

Orphism (more rarely Orphicism; Ancient Greek: Ὀρφικά) is the name given to a set of religious beliefs and practices[1] originating in the ancient Greek and Hellenistic world,[2] as well as from the Thracians,[3] associated with literature ascribed to the mythical poet Orpheus, who descended into the Greek underworld and returned. Orphics revered Dionysus or Bacchus (who once descended into the Underworld and returned) and Persephone (who annually descended into the Underworld for a season and then returned). Orpheus was said to have invented the Mysteries of Dionysus.[4] However, Orpheus was more akin to Apollo than to Dionysus in the earliest sources and iconography. During his last days, he shunned the worship of other gods and devoted himself to only Apollo.[5]

Poetry containing distinctly Orphic beliefs has been traced back to the 6th century BC[6] or at least 5th century BC, and graffiti of the 5th century BC apparently refers to "Orphics".[7]

Classical sources, such as Plato, refer to "Orpheus-initiators" (Ὀρφεοτελεσταί), and associated rites, although how far "Orphic" literature in general related to these rites is not certain.[8] As in the Eleusinian mysteries, initiation into Orphic mysteries promised advantages in the afterlife.

The Orphic theogonies are genealogical works similar to the Theogony of Hesiod, but the details are different. The theogonies are symbolically similar to Near Eastern models. The main story has it that Zagreus, Dionysus' previous incarnation, is the son of Zeus and Persephone. Zeus names the child as his successor, which angers his wife Hera. She instigates the Titans to murder the child. Zagreus is then tricked with a mirror and children's toys by the Titans, who shred him to pieces and consume him. Athena saves the heart and tells Zeus of the crime, who in turn hurls a thunderbolt on the Titans. The resulting soot, from which sinful mankind is born, contains the bodies of the Titans and Zagreus. The soul of man (the Dionysus part) is therefore divine, but the body (the Titan part) holds the soul in bondage. Thus, it was declared that the soul returns to a host ten times, bound to the wheel of rebirth. Following the punishment, the dismembered limbs of Zagreus were cautiously collected by Apollo who buried them in his sacred land Delphi. In later centuries, these versions underwent a development where Apollo's act of burying became responsible for the reincarnation of Dionysus, thus giving Apollo the title Dionysiodotes (bestower of Dionysus).[9] Apollo plays an important part in the dismemberment myth because he represents the reverting of Encosmic Soul back towards unification.[10][11]

There are two Orphic stories of the rebirth of Dionysus: in one it is the heart of Dionysus that is implanted into the thigh of Zeus; in the other Zeus has impregnated the mortal woman Semele, resulting in Dionysus's literal rebirth. Many of these details differ from accounts in the classical authors. Damascius says that Apollo "gathers him (Dionysus) together and brings him back up". Firmicus Maternus, a Christian author, gives a different account with the book On the Error of Profane Religions. He says that Jupiter (Zeus) originally was a (mortal) king of Crete—a concept of Euhemerus—and Dionysos was his son. Dionysos was murdered, and then cannibalized. Only his heart was salvaged by Athena. A statue of gypsum (the same substance the Titans used to disguise themselves) was then made to look like Dionysos, and the heart placed within.[12]

The Orphic theogonies include: 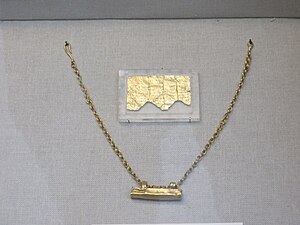 Surviving written fragments show a number of beliefs about the afterlife similar to those in the "Orphic" mythology about Dionysus' death and resurrection. Bone tablets found in Olbia (5th century BC) carry short and enigmatic inscriptions like: "Life. Death. Life. Truth. Dio(nysus). Orphics." The function of these bone tablets is unknown.[14]

Gold-leaf tablets found in graves from Thurii, Hipponium, Thessaly and Crete (4th century BC and after) give instructions to the dead. Although these thin tablets are often highly fragmentary, collectively they present a shared scenario of the passage into the afterlife. When the deceased arrives in the underworld, he is expected to confront obstacles. He must take care not to drink of Lethe ("Forgetfulness"), but of the pool of Mnemosyne ("Memory"). He is provided with formulaic expressions with which to present himself to the guardians of the afterlife.

I am a son of Earth and starry sky. I am parched with thirst and am dying; but quickly grant me cold water from the Lake of Memory to drink.[15]

Other gold leaves offer instructions for addressing the rulers of the underworld:

Now you have died and now you have come into being, O thrice happy one, on this same day. Tell Persephone that the Bacchic One himself released you.[16]

Orphic views and practices have parallels to elements of Pythagoreanism. There is, however, too little evidence to determine the extent to which one movement may have influenced the other.[17] In the fifteenth century, the Neoplatonic Greek scholar Constantine Lascaris (who found the poem Argonautica Orphica ) considered a Pythagorean Orpheus.[18] The book The works of Aristotle (1908, p. 80 Fragments) mentioned[19]

The Orphics were an ascetic sect; wine, to them, was only a symbol, as, later, in the Christian sacrament. The intoxication that they sought was that of "enthusiasm," of union with the god. They believed themselves, in this way, to acquire mystic knowledge not obtainable by ordinary means. This mystical element entered into Greek philosophy with Pythagoras, who was a reformer of Orphism as Orpheus was a reformer of the religion of Dionysus. From Pythagoras Orphic elements entered into the philosophy of Plato, and from Plato into most later philosophy that was in any degree religious.

Bertrand Russell (1947) pointed out about Socrates

He is not an orthodox Orphic; it is only the fundamental doctrines that he accepts, not the superstitions and ceremonies of purification.[21]

The main elements of Orphism differed from popular ancient Greek religion in three ways: by characterizing human souls as divine and immortal but doomed to live (for a period) in a "grievous circle" of successive bodily lives through metempsychosis, or the transmigration of souls; by prescribing an ascetic way of life which, together with secret initiation rites, was supposed to guarantee not only eventual release from the "grievous circle" but also communion with god(s); and by being founded upon sacred writings about the origin of gods and human beings.

Distinctively Orphic views and practices are attested as early as Herodotus, Euripides, and Plato. The recently published Derveni papyrus allows Orphic mythology to be dated to the end of the 5th century BC,[22] and it is probably even older.[23] Other inscriptions found in various parts of the Greek world testify to the early existence of a movement with the same core beliefs that were later associated with the name of Orphism.