From Wikipedia, the free encyclopedia
(Redirected from Epimetheus (mythology))
Jump to navigation Jump to search
For other uses, see Epimetheus (disambiguation). 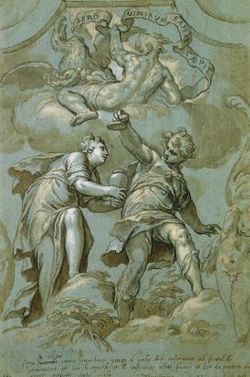 Pandora offers the jar to Epimetheus.

In Greek mythology, Epimetheus (/ɛpɪˈmiːθiəs/; Greek: Ἐπιμηθεύς, which might mean "hindsight", literally "afterthinker") was the brother of Prometheus (traditionally interpreted as "foresight", literally "fore-thinker"), a pair of Titans who "acted as representatives of mankind" (Kerenyi 1951, p 207). They were the sons of Iapetus,[1] who in other contexts was the father of Atlas. While Prometheus is characterized as ingenious and clever, Epimetheus is depicted as foolish.

According to Plato's use of the old myth in his Protagoras (320d–322a), the twin Titans were entrusted with distributing the traits among the newly created animals. Epimetheus was responsible for giving a positive trait to every animal, but when it was time to give man a positive trait, lacking foresight he found that there was nothing left.[2] Prometheus decided that humankind's attributes would be the civilising arts and fire, which he stole from Athena and Hephaestus. Prometheus later stood trial for his crime. In the context of Plato's dialogue, "Epimetheus, the being in whom thought follows production, represents nature in the sense of materialism, according to which thought comes later than thoughtless bodies and their thoughtless motions."[3]

According to Hesiod, who related the tale twice (Theogony, 527ff; Works and Days 57ff), Epimetheus was the one who accepted the gift of Pandora from the gods. Their marriage may be inferred (and was by later authors), but it is not made explicit in either text. In later myths, the daughter of Epimetheus and Pandora was Pyrrha, who married Deucalion, a descendant of Prometheus. Together they are the only two humans who survived the deluge.[4] In some accounts, Epimetheus had another daughter, Metameleia, whose name means "regret of what has occurred" for those that do not plan ahead will only feel sorrow when calamity strikes.[5]

In his seminal book Psychological Types, in chapter X, "General description of the types", Carl Jung uses the image of Epimetheus (with direct reference to Carl Spitteler's Epimetheus) to refer to the false application of a mental function, as opposed to its whole, healthy, and creative use.[6]

Carl Schmitt, in his book Ex captivitate salus describes himself as a Christian Epimetheus.[7]

Ivan Illich devotes a chapter of Deschooling Society to the Rebirth of Epimethean Man.

Les Amis, in his book Commemorating Epimetheus (2009), reinstates the value of Epimetheus.[according to whom?] He is credited with bringing to the world our knowledge of dependency on each other described phenomenologically in terms of sharing, caring, meeting and dwelling and loving.

Epimetheus is also mentioned in the Japanese Light Novel "Campione!" as the father of god-slayers, because it would take someone with no foresight to fight a god.